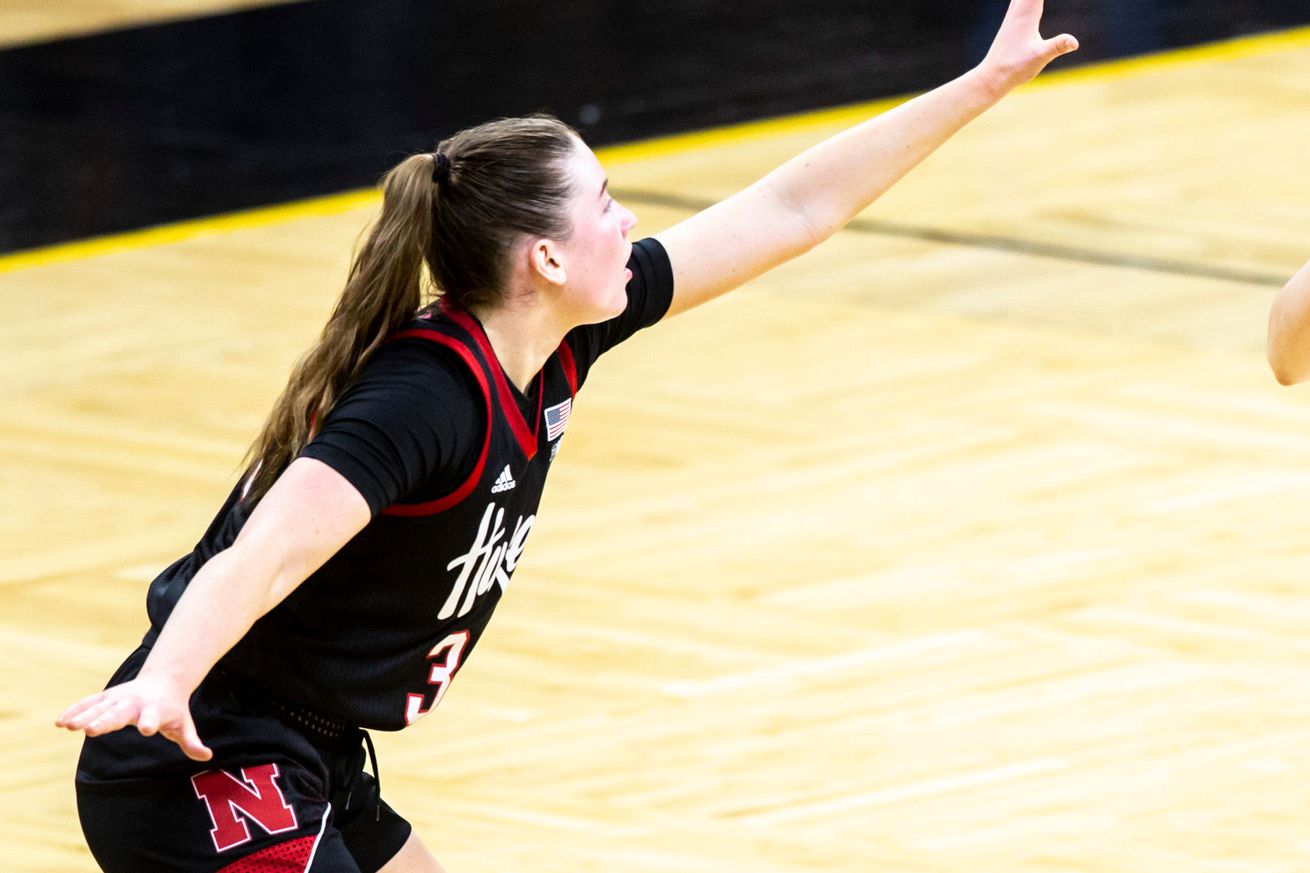 Issie Bourne found the bucket first to get the Huskers the early lead. Allison Weidner is running point. Amy Williams has a lot of confidence in her freshman. It took until 8:16 for Iowa to answer Nebraska’s basket - a low scoring game is very much to the Husker advantage. After a slow first two minutes, the teams traded baskets in quick succession (Markowski for Nebraska). Ruby Porter drew an offensive foul on Iowa star Caitlin Clark.

A Markwoski three gave the Huskers a 9-4 lead with 6:30 left in the first quarter and then a Bourne layup extended it to 11-4. Allison Weidner picked up her second foul and Amy Williams needed to bring in Whitney Brown (the third option at point guard). Nebraska is rolling as they extend the lead to 16-5 with 5:22 when Lisa Bluder called a timeout. Issie Bourne has eight points so far.

The scoring stagnated out of the timeout until Anni Stewart hit a three from a long way back (19-5 Neb). It took several minutes for Iowa to find the basket, but Markowski hit her second three of the game to answer (22-8 Neb). Nebraska has committed six fouls to one for Iowa and the Hawkeyes take advantage of the bonus. Caitlin Clark is especially good at drawing fouls. BUT ALEXIS MARKOWSKI DECIDED TO SCORE MORE POINTS THAN THAT. She hit another three (25-10 Neb). Clark continued to draw fouls and she is a 90% FT shooter. Weidner came back in the game and played aggressively, blocking a shot despite having two fouls.

MARKOWSKI HITS HER FOURTH THREE POINTER! The Huskers have scored 30 in the first quarter. Markowski has 16 points and Bourne eight. Stewart and Cayton each have three to round out the Husker scoring.

Both teams scored on their inital possessions and then Iowa added a three to cut the lead 32-21 Neb. Iowa is scoring fast and furious, just like they want it. The lead was cut further behind Iowa free throws (34-25 Neb) with 7:12 left. MiCole Cayton picked up her second foul. Iowa continued to score and closed within 34-28 Neb with 5:07 left.

With one minute left, the score is 42-37 in favor of Nebraska. The Huskers have committed eight fouls to ZERO for Iowa. The Hawkeyes cut the lead further and Issie Bourne picked up her second foul. This is getting ridiculous.

Markowski picked up right where she left off and hit a three pointer to open the quarter. Iowa answered with a layup but then Ruby Porter wanted in on the party as did Caitlin Clark (48-46 Neb). Ashley Scoggin continued the three point party but Caitlin Clark hit a mid range jumper (51-48 Neb). Wow. I can’t type fast enough to keep up with the scoring.

Markowski picked up her third foul and Iowa took their first lead on the free throws (54-53 Iowa) with 6:10 left in the quarter. Kendall Moriarty got it right back with a layup (55-54 Neb) but then picked up her second foul. Issie Bourne and Moriarty got the Huskers moving on the scoreboard and the lead is back to 60-54 Neb with 4:30 left.

OH LOOK! IOWA CAN COMMIT A FOUL! Nebraska attempts their first free throws of the game and Moriarty makes one (61-54 Neb). The score stayed there until more Iowa free throws (YES, MORE - they have shot 24 of them compared to two for Nebraska). Anni Stewart picked up her third foul and the Hawkeyes shoot their 25th free throw to close within four (63-59 Neb) with 2:20 left. The foul trouble brings Bella Cravens into the game to hopefully close out the third quarter on a gimpy ankle and protect the other two post players from further foul trouble.

Iowa scored five points out of the timeout to take the lead (64-63 Iowa) as the clock wound under a minute. Nebraska got it back right away (Cravens) and she hit her free throw for the three-point play (66-64 Neb). Iowa wouldn’t go away and hit a three to get the lead back (67-66 Iowa).

Iowa scored the first five points (and drew the third foul on Kendall Coley) to extend their lead to 72-66 in 50 seconds. The Huskers clawed back within three (72-69 Iowa) but Iowa hit a jumper on their next possession (74-69 Iowa). Iowa is starting to play more aggressive defense, but not getting called for the fouls. Playing clean early gets you the benefit of the doubt.

MiCole Cayton picked up her fourth foul and the free throws extended the lead to seven and then Clark extended it to nine (80-71 Iowa) with five minutes left. A Husker (Bourne) actually got to the free throw line (REALLY?!?) but Iowa maintained their advantage with a bucket on the other end. Markwoski hit her sixth three pointer but Iowa answered with a layup (84-76 Iowa).

Fourth foul on Markowski. Free throws by Clark are good. 88-81 Iowa with 32 seconds.

I’m not sure why, but Iowa called a timeout to advance the ball and scored a layup.

The Huskers committed 28 fouls to seven for Iowa. Iowa played a clean game early and got the benefit of the doubt late when they started to make more contact. Free throws won this game for the Hawkeyes as they were 31-34 from the line while Nebraska only attempted eight free throws (hitting five).

Two Huskers scored in double digits, Markowski 27 and Bourne 15. Ashley Scoggin had nine and Allison Weidner eight. Scoggin led Nebraska with six rebounds and Weidner and Bourne and Markowski each had four.