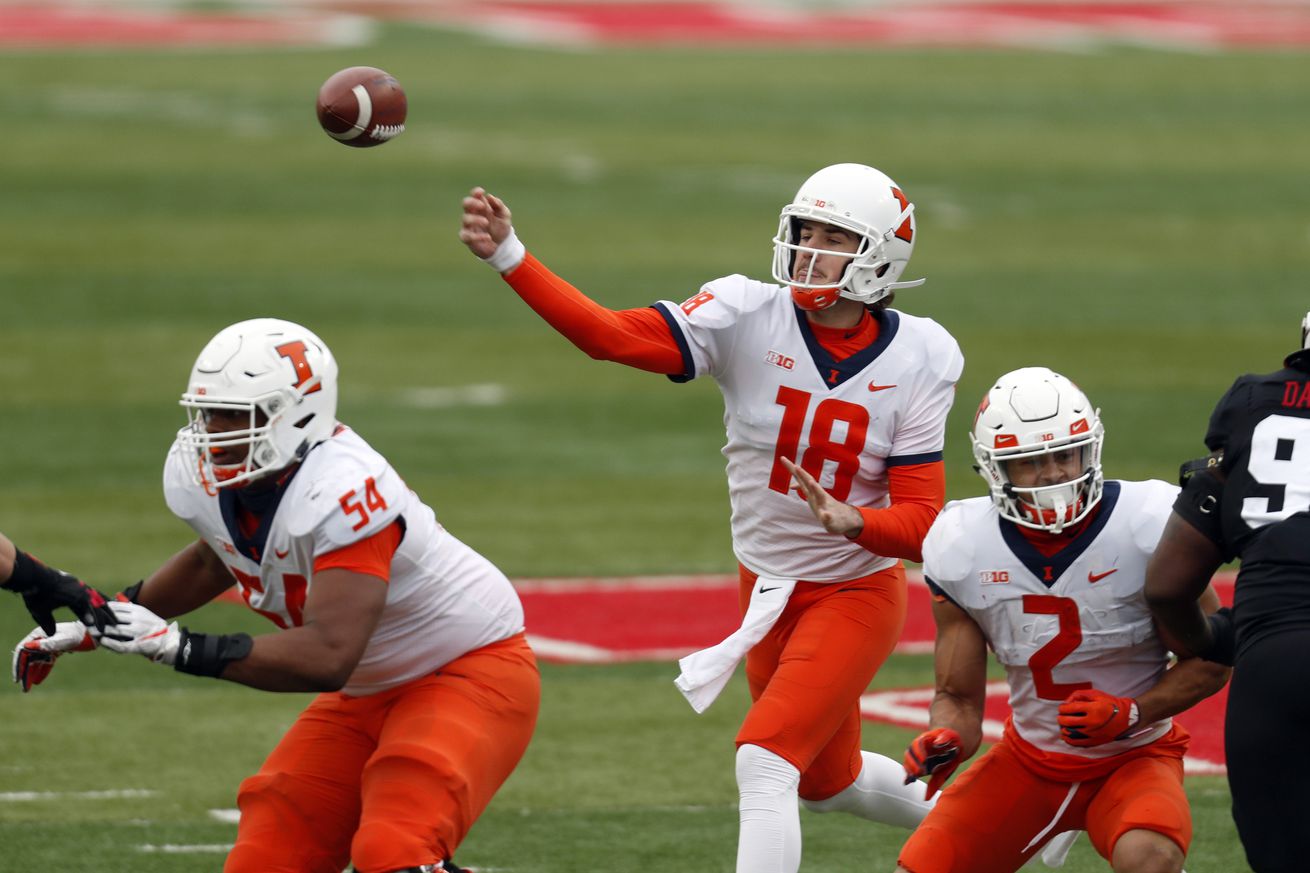 The Huskers looked terrible in every facet of the game. And when you thought they couldn’t look worse...

RBs Dedrick Mills and Ronald Thompkins both OUT today.

I would not be surprised if some plays were installed this week to get Adrian Martinez on the field at running back. I don’t think the coaches can keep running Wan’Dale as much as they did last week and keep him healthy. Frost alluded to trying to get Adrian some plays the way they used Luke in the first game and without your top backs, it seems logical to get him in there - he has been very effective as a runner this season.

The radio announcers just indicated Marvin Scott III will start at running back. (I didn’t expect Adrian to start at RB - but I wouldn’t be surprised to see him line up there at some point in this game).

Illinois is dealing with some personnel losses as well

Illinois won the toss and deferred. The Huskers will get the ball to start the game.

It seems fitting that the weekend after handing out the Blackshirts that Nebraska goes with the black alternates. Let’s try to not have our defense play 91 snaps this week though.

Alante Brown brought the ball out of the end zone and was upended at the 15.

Swing pass ruled a fumble recovered by Illinois. (It looked like a forward pass on replay). WHY WAS THIS NOT REVIEWED OR CHALLENGED?

Penalty on the Blackshirts. Drink.

An Illinois fumble was not reviewed either. The replay booth must be on early vacation? Second and goal - Illinois touchdown by Chase Brown.

Alante Brown made it out near the 30 this time. HOW ABOUT NO MORE SWING PASSES PLEASE?

The coaches maybe were listening as we saw downfield throws (nothing deep yet). Levi Falck for an eight yard gain. Marvin Scott III carry for the first down. Austin Allen sighting - Luke needed to throw that one sooner. Zavier Betts sighting.

Between Scott carries and McCaffrey keepers, the Huskers worked their way down to the red zone. Rahmir Johnson and Wan’Dale Robinson have been on the field, but no touches yet.

The Connor Culp extra point was good. Having a reliable kicker is nice, isn’t it?

The Illini worked their way toward midfield. Ben Stille tackled the ball carrier for no gain. But the Illini kept marching and then Chase Brown had a BIG run to the one yard line where he was chased down by Cam Taylor-Britt who was hurt on the play. (He looks like he will be okay).

Okay Huskers, when coach talked to you about playing better in the second half, it is understood that you need to do that in the first half too.

A Wan’Dale Robinson carry was followed by Luke airmailing a ball to a wide open Wan’Dale. Luke carried the ball to midfield on a draw. A ball thrown into triple coverage was high and nearly picked off.

Bring it down a bit Luke. Wan’dale isn’t that tall. One third and four at the 42, the offense stayed on the field. Bad snap. Drink. Interception. Drink.

On the bright side, the Illini interception gave them worse field position than the turnover on downs.

FALSE START ON THE OTHER TEAM.

The Blackshirts were holding the Illini to no-gain plays (JoJo Domann on one of them) until a Casey Rogers personal foul. Sigh. Brandon Peters got them out to midfield.

End of the first quarter.

Illinois averages 17 points per game in 2020. Nebraska has allowed them to score 21 in a quarter and a half.

Nebraska’s possession consisted of many incomplete passes. Three and out. (see above gif)

First punt of the game coming up by William Przystup.

The Blackshirts showed some life with a tackle for no gain by Marquel Dismuke. Third down. Incomplete (JoJo). Fourth and two. Punt.

Cam Taylor-Britt crossed midfield on the punt return, but a flag back near where he caught the ball was against the Huskers and brought it back to the 36. After a loss on first down, Luke found Travis Vokolek for the first down at midfield. Loss on first down. Incomplete on second down (two defenders closing fast and Luke was lucky that was not intercepted). Luke then found Austin Allen for the first down and Illinois was called for roughing the passer.

Husker ball at the 25 yard line. Luke then found Oliver Martin who got inside the 10 yard line. First and goal Nebraska!

Scott to the five yard line.

Scott to the three.

Luke to the two.

The Scott touchdown was called back for holding on Cameron Jurgens.

The ball was fumbled on the kickoff, but recovered by Illinois. A personal foul on the Illini pushed them back to the 11 yard line.

Mike Epstein logged a big run when the defensive line got out of position. Josh Imatorbhebhe catch at the one over Quinton Newsome. Epstein touchdown. Sigh.

89 yards in four plays?!? Illinois is setting season high totals - ALL IN THE FIRST HALF.

The Scott carry goes for a loss on first down.

Incomplete on second down. Luke is really inaccurate today.

Third and long. Whatya got? I’m picking a Luke McCaffrey draw or carry.

False start on the punt. Drink.

What are the chances we see Adrian Martinez at quarterback in the second half? He has been terribly inaccurate with his passes this season, but Luke is not better and the offensive game plan seems to way too conservative. Maybe they’ll open up the playbook a bit for 2AM?

A bad snap for Illinois results in an incompletion. Chase Brown for seven yards. Third and three.

Why can other teams have good screen passes that go for positive yards and we cannot?

Will Honas stuffs a run play. Short completion on second down. Another third down.

Illinois is starting to use their timeouts to try and score before half. They also get the ball to start the second half.

AND PETERS GOES DOWN ON A WILL HONAS SACK!!

The Husker offense gets the ball back with 1:41 left in the half. Luke carries the ball to the 45 yard line on a draw.

Then he throws one in the dirt at Rahmir Johnson and takes a sack on second down. Luke held that one way too long. He needed to get that out.

Stop me if you’ve heard this one before but Luke decides to carry the ball on third and long.

Fourth down and five to go.

The pass was complete to Wan’dale for a first down. The Illini were offsides, but the penalty was declined.

Luke mishandled the snap, but recovered the ball.

Luke wound up to hit a wide open Levi Falck AND promptly throws the interception. Illini ball near midfield with 17 seconds and a timeout in their pocket.

The Illini completed the ball to the 20 but the half mercifully ran out before they could spike the ball and kick the field goal.

Today would be a good day for the Huskers to become a second half team. PLEASE.

The Blackshirts may have gotten steamrolled in the first half, but they came out with some fire in the second half and forced a punt.....OH WAIT....the Illinois fake was successful when every black jersey turned their back on the punter and ran the other way. The Huskers must have shown that in the first half and the Illinois coaches saw it and called for the fake if Nebraska did it again.

That took some of the wind out of the sails of the Husker defense and Illinois worked their way past midfield.

After another Illinois first down, Myles Farmer was called for a facemask (he pulled the entire helmet off) and gained more free yards. The game was getting chippy as the Huskers can feel it slipping away.

Second and goal. Incomplete (Bootle was getting trash talked by the receiver and made the play)

The field goal was good.

Illinois used up nearly half the quarter on that drive.

Luke McCaffrey is still in at quarterback. I did not see that coming, but let’s hope for the best here.

The Huskers moved past midfield behind Wan’dale and Luke. Then he found Oliver Martin for another big gain.

WANDALE BREAKING TACKLES TO THE ONE YARD LINE!!!!!!

Everyone yelling for more touches for #1 are vindicated.

First and goal. Wan’dale gets a little closer.

Illinois fumbled, but recovered and then got a big chunk play to Daniel Barker to get across midfield.

Second goal. Epstein was down at the one.

WAIT, THERE IS A REPLAY OFFICIAL?!? When did he/she get to the game?

Nebraska converted the fourth down and then Wan’dale fumbled and gave the ball back to Illinois.

TURNOVER #4 for those of you keeping score at home.

Anyone have images of Iowa State 2009 running through their minds?

Best wishes and prayers to Colin Miller. The Husker linebacker and captain had to be put on a stretcher and taken off the field. The amount of concern on the faces of players and the medical staff tells a person that this is a very serious situation.

Under unimaginable circumstances, the Blackshirts forced the field goal.

The Huskers played some street ball.

The Blackshirts force a punt.

Adrian Martinez is in the game.

Wan’dale nearly gets decapitated again, but fortunately walked off the field after needing a bit of extra time on the turf.

Touchdown Levi Falck. He was fighting with Zavier Betts for the catch, but fortunately Falck held on after the collision.

The two point conversion to Austin Allen was good, but he was called for offensive pass interference (not a good call). The second attempt resulted in a sack.

How to Decorate a Small Bathroom (Full Walkthrough)