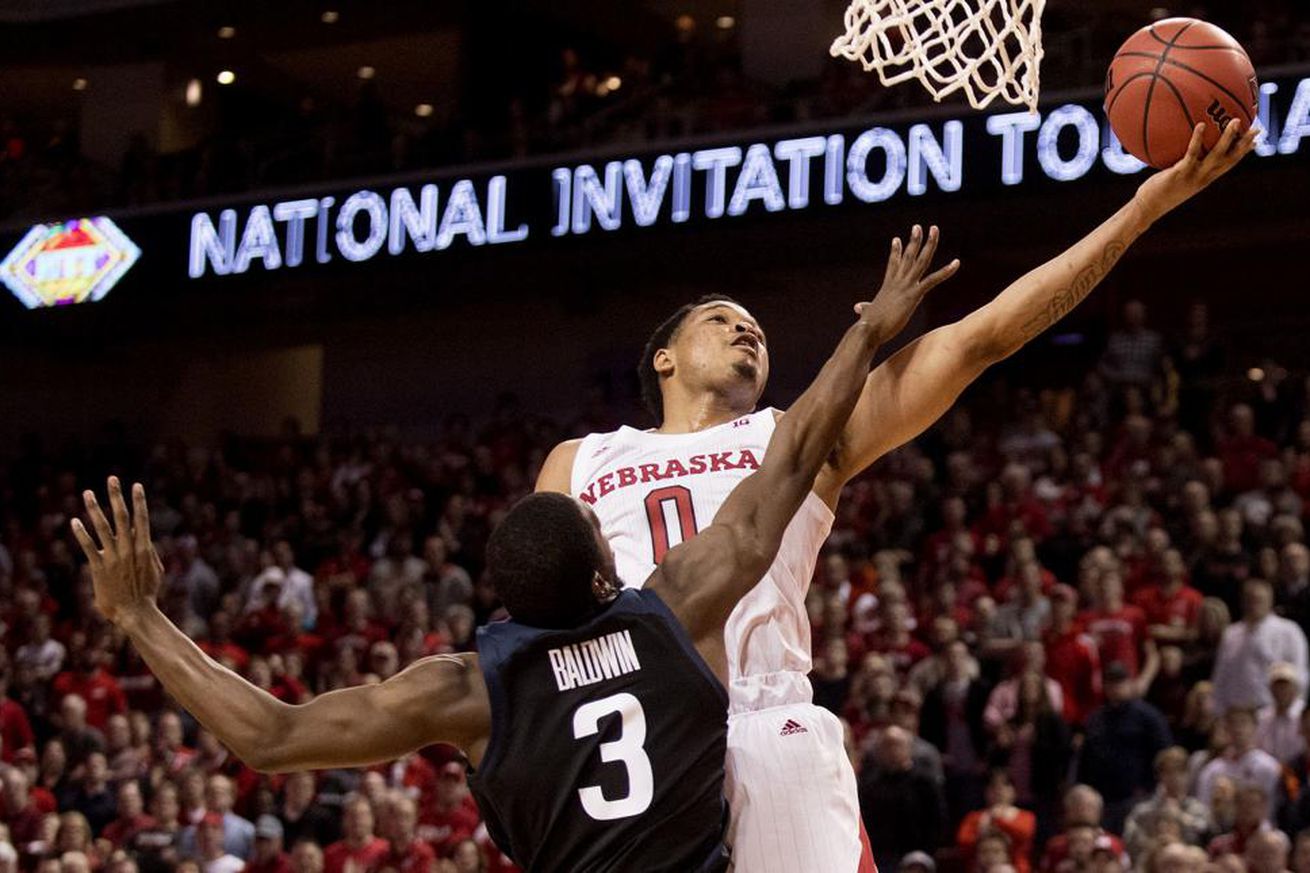 As we close out the decade, let’s take a look at the best wins we can savor as Nebrasketball fans.

It’s been a decade of “new” for our Nebraska Cornhuskers. A new conference, new arena, new practice facilities, and two new head coaches. Through all the new the Huskers experienced this past decade, players we have seen come and go and their contributions to the team are forever recorded in the books of Husker lore. So with that in mind, we here at Corn Nation broke down our top ten players and wins, and our worst five moments from the past decade as the 2010’s draw to a close. First up was our countdown of the top ten players of the 2010’s last week. If you haven’t read that, you can find Part 1 here, and Part 2 here. Then came the five worst moments, and you can revisit those here.

Sobriety In The Time of Quarantine: T…
What do you mean there are side effec…
8 Places to Drink Coffee in KC that …
What is Google Ads and Types of Ad Ca…
Guide to Financing Your Home Renovati…

Today comes the start of our top ten wins countdown with wins number ten through six. Be sure to check back tomorrow for our top five!

As for how we made our list, our criteria was a mixture of how important the win was in terms of a given season, the strength of the opponent, where the game took place, and if there was any special significance to the game (given, especially, the conference and arena changes of the past decade). So without further ado, let’s take a look at our first five in the countdown! 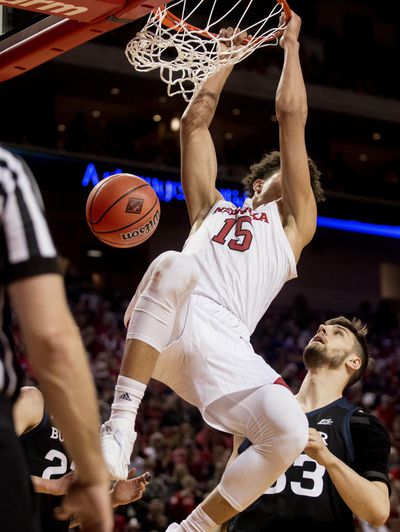 This one squeaks into our list at number ten primarily on the “feel good” factor. The Huskers were down to a bare bones roster of just six players due to injury and had a coach who knew he would be let go as soon as he loses his next game, but found that March magic in the first round of the NIT consolation tournament. The fifth seed Butler Bulldogs came to PBA for Tim Miles final “home” game and the fourth seeded Huskers prevailed to live another day with an 80-76 win. Isaiah Roby lit up the rim with 28 points, going 9-12 from the field and 9-10 from the free throw line. Roby also led the team in rebounds with 8. James Palmer Jr. chipped in with 23 points, Glynn Watson Jr. scored 17, and walk-on Johnny Trueblood warmed our heart with his 31 minutes off the bench that included 7 rebounds, 6 points, and 5 assists. This was a great way to bring an end to the Tim Miles era at PBA: the little team that could chugging along after their Big Ten Tournament run and staying alive for another day. For that special feel good factor, we put this one at tenth on our top ten of the decade list.

The last conference win as a Big XII school, the last home conference game as a member of the Big XII, and a win over a ranked rival. All of this factors into this win earning the number 9 spot on list, as our Cornhuskers earned the upset over 24th ranked Missouri. Nebraska shot 39% from three and won the boards in dominating fashion, 35-24. That margin of 11 was also how many offensive rebounds the Huskers grabbed, and all of those great stats add up to help win this 69-58 Big XII farewell game. Meanwhile, the Nebraska defense managed 8 steals and held the Tigers to only 42% shooting from the field. 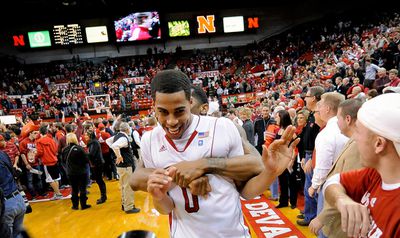 Just the second conference win for the Huskers in the Big Ten and it was a big one! Number 11 Indiana came to town and left the loser that night after a 70-69 finish. The Hoosiers would go on to the sweet sixteen that season, but on this particular night would fall to Nebraska for the first time since 1920. Despite trailing by double-digits at one point in this one, Nebraska rallied late and managed to win this one on a pair of free throws with 11 seconds left to seal it. And the fans rushed the floor to celebrate. 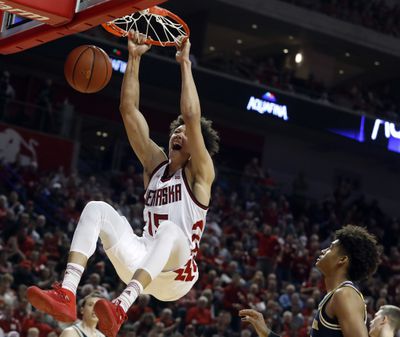 Bruce Thorson-USA TODAY Sports
Nebraska Cornhuskers forward Isaiah Roby (15) dunks the ball during theme against the Michigan Wolverines in the first half at Pinnacle Bank Arena.

Out of all the teams in the Big Ten since Nebraska joined, they have struggled against Michigan arguably more than anyone else at 1-10 since joining the conference. It took the Huskers seven seasons in the Big Ten before they finally got a win over the Wolverines. That single win, coming January 18, 2018, still stands as the one and only win over Michigan for Nebraska.

The Huskers made their lone win count as it was a 20 point romp over those ugly rodents. Nebraska was lightning hot shooting, going for 46% from three and 55% from the field. Four Huskers scored in double-digits in this one, with James Palmer Jr. leading the way with 19 points. Defensively the Huskers held Michigan to only 38% shooting from the field. So for finally getting the monkey off their back and beating the last team left in the win-less column in conference head-to-head match-ups and doing it in big fashion while they were ranked, this game comes in at number seven on our list. 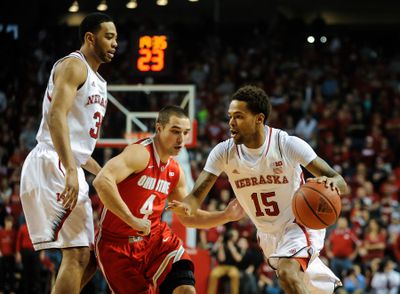 Photo by Eric Francis/Getty Images
Aaron Craft #4 of the Ohio State Buckeyes guards Ray Gallegos #15 of the Nebraska Cornhuskers during their game at Pinnacle Bank Arena on January 20, 2014.

The first conference win in the shiny, new Pinnacle Bank Arena was one for the ages as the Huskers went on to defeat then #17 Ohio State 68-62. The Huskers went on to an 8-1 conference home record, and overall were 15-1 at home in a season that saw their first NCAA tournament appearance of the millennium. The Huskers shot 50% from the field in this one, while holding the Buckeyes to just 40%. While Nebraska had 17 turnovers in this one, they got 8 steals and won the board 33-27.

Crucial to getting the big upset win was their 77% shooting from the free throw line, going 20-26 in this one. Terran Petteway and Shavon Shields led the Huskers with 18 points apiece. Also of note: this was the second and last win over Ohio State by the Huskers since joining the Big Ten. Like Michigan, Nebraska has struggled just as much against the Buckeyes, going 2-12 against them since joining the Big Ten Conference. So for all of the above—huge home upset win over ranked opponent, first conference win in the new arena, and the start of a magical home conference win streak on the season—this game comes in at number six on our list.

That’s a wrap for the first five games in our top ten countdown. Are there any changes you would make to your own list? Were you at any of these games or remember watching them on tv? Let’s hear about it in the comments. And stay tuned for the top five wins tomorrow!