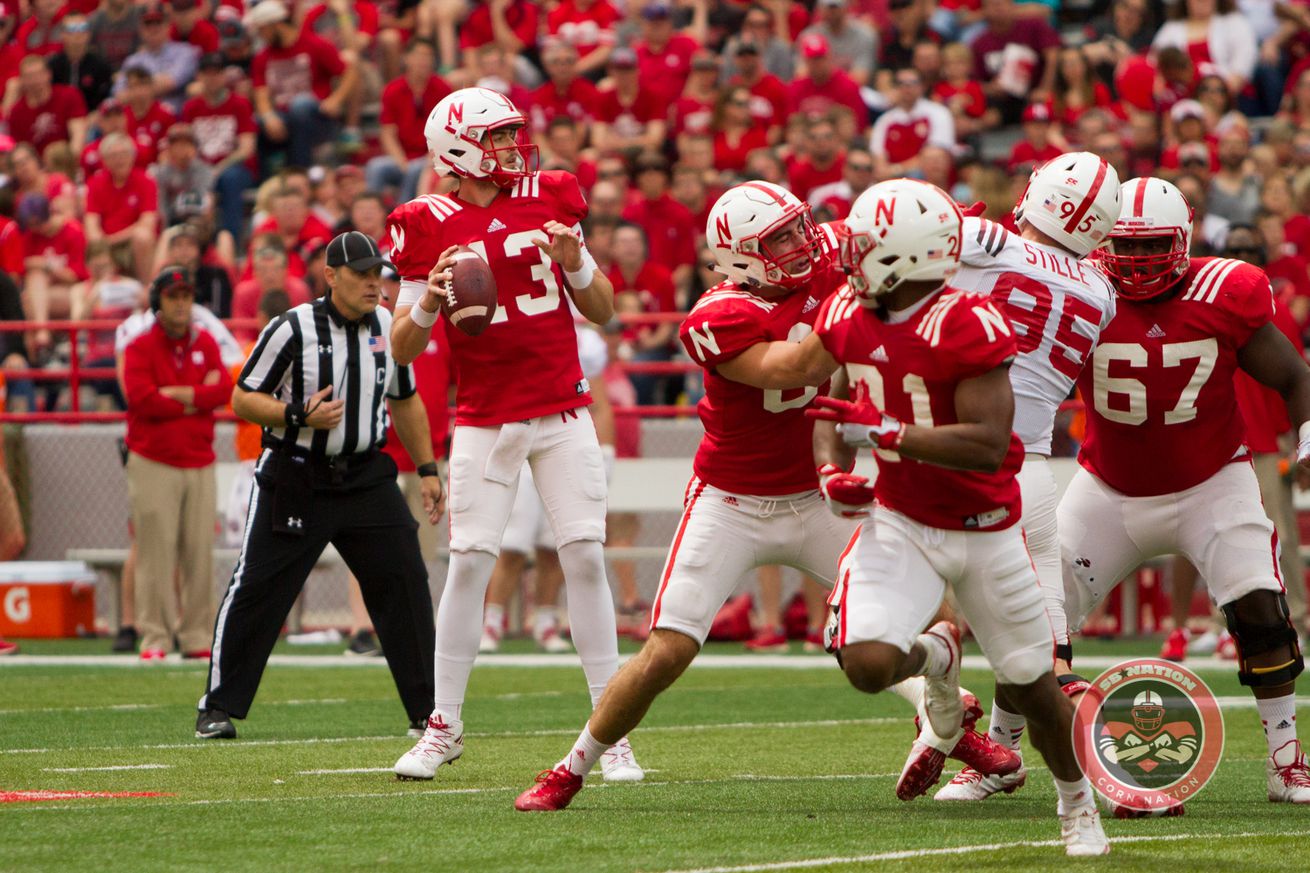 If expectations had weight, how flattened would Lee be right now?

To the surprise of nearly no one Tanner Lee was named Nebraska's "Top QB" by Mike Riley yesterday. It makes sense. Lee at least has starting experience over the other two potential candidates, Tristan Gebbia and Patrick O'Brien. It also makes sense to name a "Top QB" right now instead of waiting for the fall. The move by Riley establishes leadership on a team that will need it, at least if you believe that a starting quarterback is required to be a team leader.

There were a lot of fans, myself included, who felt that Gebbia looked like the best of the three quarterbacks. If we were honest with ourselves, and took a step back, we'd realize why Gebbia has no real shot at the starting position unless the other two quarterbacks completely fail.

The reason lies in Nebraska fans and their expectations - which are sure to be so overblown by the time the 2017 football season rolls around that Lee will have no chance whatsoever of meeting them. Lee has been named the starting quarterback for a fan base that is so hungry for any type of championship that one has to wonder if he's being offered early on, i.e., before fall, to see whether he's mentally capable of being a sacrificial lamb

Lee is not just the only quarterback with starting college experience, but he's a little older as well. One would hope that means more mature and capable of withstanding the stupid comments that will be made about him before he takes a snap in a real football game as the starting quarterback of the Nebraska Cornhuskers.

Can you imagine Gebbia in the same role?

A couple of years ago during a college visit with my daughter, I asked a University Nebraska student what she considered to be the biggest challenge between being a senior in high school and a freshman at a university. Her answer was "time management". (I asked the question specifically so that my daughter and other incoming students would get an idea of what they might prepare for.)

So if you can imagine being a new freshman student, trying to figure out where your classes are, how you're going to get all your studying done for both your academic classes and trying to learn an entirely new offense, and then being named as the starting quarterback of a fan base as tortured as Nebraska's?

The big question for Husker fans is how soon you’ll turn on him and want to see him boiled in oil? First interception? First loss?

Do expectations have weight? If they did, how flattened would Lee be right now, in April with the season still months away? What are yours? Savior, super human, hero?

Examples of expectations regarding Lee’s future:

@MikelSevere Cause Lee has 1st round NFL talent. All Husker fans weren't as high on Tommy & Martinez as you. Last year you said Tommy was top QB in BIG

The best pro potential of any Nebraska quarterback since Brook Berringer, Lee fits right in with the rest of the Big Ten...

I don’t disagree with McKewon, but, geez.... the “looks like a better passer than most of the quarterbacks in the Big Ten West” might be a jump considering he has yet to take a snap in the Big Ten.

Miami and Nebraska are rolling on the college football recruiting trail - SBNation.com (SBNation.com)

Recruiting expert Brian Towle, of Corn Nation, believes that Mario Goodrich, a four-star athlete from Lees Summit (Mo.) West could be the next to commit.

You guys saw this, right?

Graduate students Angela Bolen and Danielle Alesi and undergraduate C.J. Kracl will host the April 13 discussion. Each student will present on a theme, followed by a question-and-answer discussion.

Nebraska engineers have developed a thermal diode that allows computers to use heat as an energy source and operate in ultra-high temperatures.

Doctoral candidate Hossein Dehghani has designed a robotic alternative to the traditional colonoscope that physicians use when searching for pre-cancerous or cancerous polyps in the large intestine.

The premier undergraduate engineering student design event in Nebraska will be from 12:30 to 3:30 p.m. April 21 in Memorial Stadium's East Stadium Club Level.

A team of electrical and computer engineering students in Lincoln's retrofitting of a 1964 Chevrolet Corvair, removing the conventional internal combustion engine and drive system and installing an electric drive system that could be charged with a standard 15-amp outlet.

Okay, this one is pretty nerdie. I love it.

My family owned some Corvairs - used them for delivering groceries if I remember correctly. True story. My dad died when I was 12 of pancreatic cancer, and the night after he died, some guys came in the middle of the night and stole the not-running Corvair that was sitting in our yard, later telling my mother than he’d never paid them for it (which is why they came for it in the middle of the night, like the good, honest, upstanding mother fuckers that they were).

That was kind of my first real introduction into what a cold, dark world we live in.

The Center for Great Plains Studies has issued a new report to help rural, nature-based tourism providers in Nebraska understand their legal liability.

"The lesson that emerges is that, most often, landowners simply must act reasonably when it comes to protecting people from dangers that exist on their properties. And, in many instances, landowners need only refrain from recklessly endangering visitors," he writes in the introduction. The guide goes into detail on what those standards of reasonableness and recklessness include and practical steps landowners may take to protect themselves.

The seventh-ranked Nebraska men's gymnastics team looks leave its mark in the NU record books this weekend at the 2017 NCAA Championships in West Point, N.Y. The Huskers hope to advance to the team finals, resulting in a top-six for the first time since 1999.

The seventh-ranked Nebraska men’s gymnastics team looks leave its mark in the NU record books this weekend at the 2017 NCAA Championships in West Point, N.Y. The Huskers hope to advance to the team finals, resulting in a top-six for the first time since 1999.

The University of Nebraska and Metropolitan Entertainment & Convention Authority (MECA) will host the NCAA Division I Women's Volleyball Championship at CenturyLink Center Omaha on Dec. 17-19, 2020.

Last year, Nebraska was able to get to 9-4. This is a pivotal year for the Huskers when writing their history. Their schedule isn’t particularly brutal, but they also don’t have quarterback Tommy Armstrong back. From the outside, it’s looking like another 9-4 type of year. If that’s what you are going to get, why deprive your fan base of the tweets of Faux Pelini about Bo Pelini?

Because 9-4 was the top of where Bo Pelini was ever going to take us, and given how he recruited in his last season, he wasn’t going to go 9-4 in his eighth season anyway. Why is this so hard to understand?

Vanderbilt football made a sorority recruitment video, and it was hilarious - SBNation.com (SBNation.com)

It’s a whole easier in Florida than Vermont.

NFL players are going to try to fake the concussion protocol, no matter how good it is.

I have some problems with this article...

James Franklin announces a twist for Saturday's spring game — media members can participate in it, write about the experience after pic.twitter.com/mgOAFnAmj5

If you follow the thread on that tweet, he’s talking about having the media participate in catching kicks and punts in front of 85,000 fans. I would try that. I would suck badly, but I would try it.

If his murder and gun convictions are vacated, experts say his family could see a payday.

The same piece of Purdue University-developed technology that may one day feed astronauts on Mars is being adapted to improve production of instant porridges and other ready-to-use products in several African countries.

Can you imagine how insufferable Purdue grads will be if they send the first astronauts to Mars?

You need to look at look at the whole thread.