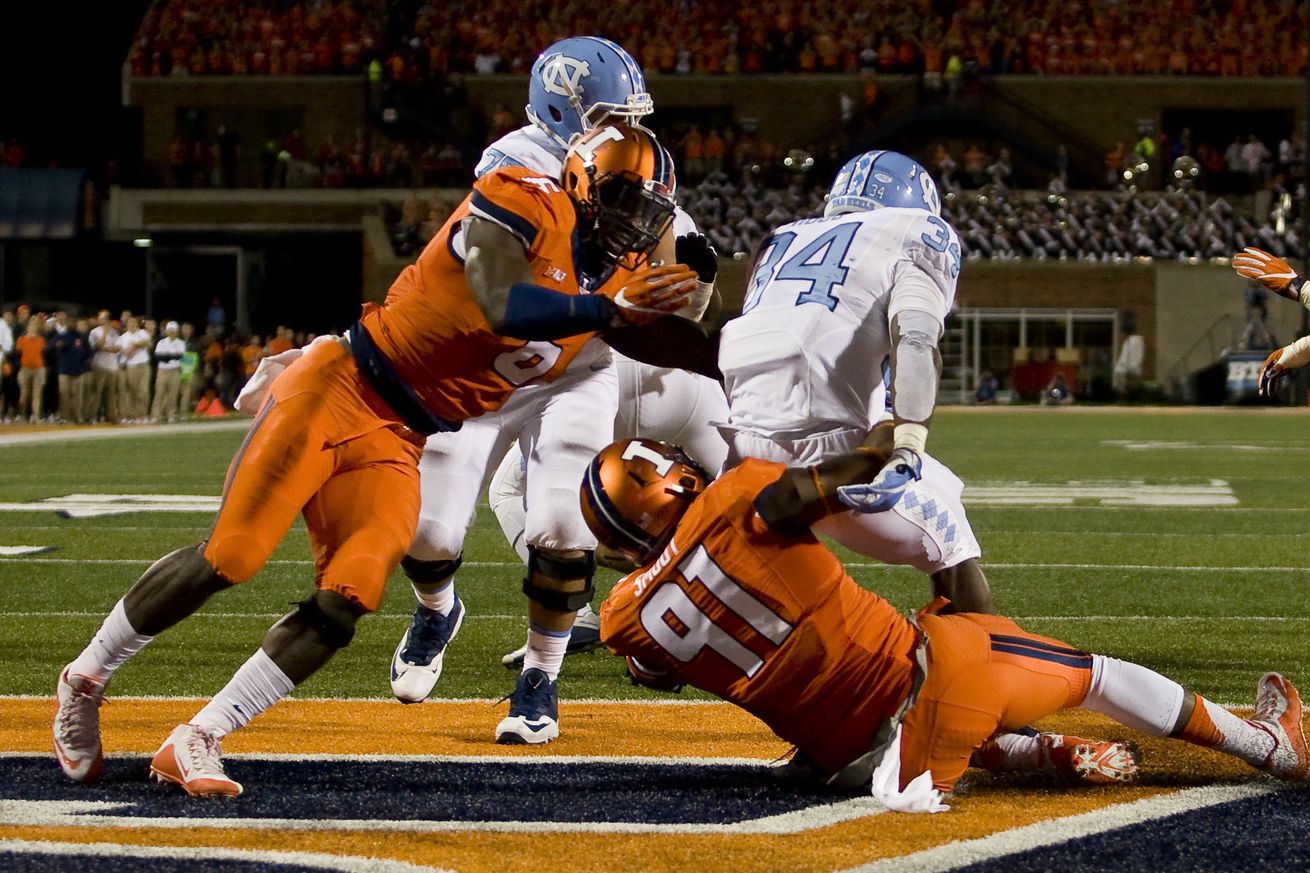 After opening the Lovie Smith era with 52-3 blowout victory over 1-AA Murray State, Illinois got off to a fast start three weeks ago against North Carolina. Ke’Shawn Vaughn sprinted 65 yards on the third play of the game to give the Illini an early lead. It didn’t last, though. Illinois’ fourth quarter comeback attempt came to an end when quarterback Wes Lunt fumbled the snap on fourth-and-three from the North Carolina 20 Yard line. A long touchdown run by the Tar Heels sealed the Illini fate as North Carolina won 48-23.

Two weeks ago, Western Michigan rushed for 287 yards enroute to a 34-10 victory over Illinois that was, well, sobering for the Illini. Even more frustrating was the ineptitude the Illini showed on offense. Vaughn rushed for just 22 yards on 15 carries, and the Illini finished the game with a net of just three yards after subtracting sacks. Wes Lunt’s passing numbers looked OK (29 of 42 passes for 312 yards, but with two or three more missed)

On the season, Lunt has completed 62% of his passes for 665 yards and six touchdowns with an interception. His top receiver is Malik Turner, who’s caught 15 passes for 233 yards and three touchdowns. Ke’Shawn Vaughn leads the Illini with 187 yards rushing for two touchdowns. Kendrick Foster topped the 100 yard mark on the ground in the season opener against Murray State and has 175 yards on the season.

On defense, Illinois ranks in the middle of the Big Ten in all of the main defensive categories except the one that ultimately matters: scoring defense (13th). The Illini are led by Cal transfer Hardy Nickerson Jr., who leads Illinois with 29 tackles. The star nobody anticipated is senior defensive end Carroll Phillips (6’3" 240 lbs.) who leads the nation after three games with nine tackles for a loss; Phillips 18 total tackles ranks second on the Illini defense. Senior strong safety Taylor Barton is fourth on the team with 14 tackles and one of the two interceptions the Illini have this season.

Illinois’ bye week was last week, and the Illini spent the week regrouping at the beatdown from a MAC school. Will they shuffle things up this week? After the jump, you’ll find the summertime preview of the Illinois Fighting Illini.

Over the last year, Illinois has led college football with the most surprising coaching changes. Everybody knew last summer that Tim Beckman was on the hot seat, but what was surprising was that Beckman didn't even make it to the opening game. Yes, one week before the season began, Beckman was dismissed following an investigation into player abuse. Offensive coordinator Bill Cubit was named interim head coach, which was a logical move. Much less logical was removing the "interim" tag at the end of the season, with Cubit getting a two year contract from Illinois' interim athletic director.

In February, Josh Whitman was named the new athletic director, and before the lamination on his ID badge had even cooled, Whitman had already fired Cubit, just a week before spring practice was scheduled to begin. A couple of days later, Whitman introduced former Chicago Bears and Tampa Bay Buccaneers coach Lovie Smith as the new head coach of the Illini. Spring practice was postponed into April as Smith hired a new staff and quickly attempted to get up to speed with the players he inherited. Most new coaches usually get a few weeks to recruit a few players, but with national signing day coming a month prior to Smith's hiring, Smith pretty much ends up with what Cubit was planning to work with.

New Illinois offensive coordinator Garrick McGee was partial to exploiting mobile quarterbacks in his offense at previous stops, but inherits the immobile 6'5" 225 lb. senior Wes Lunt, who's started games in each of his three previous seasons. Injuries allowed others to bypass him as a Oklahoma State freshman and an Illinois sophomore, but in 2015, he started every game for the Illini. His completion percentage dropped from 64% to 56% last season, with interceptions rising from three (in seven starts) to six. Lunt only intentionally ran six times last season, gaining 13 yards, but ended up netting a loss of 153 yards when adding in sacks. Sophomore Chayce Crouch (6'4" 225 lbs.) is much more of dual-threat; he rushed 25 times for 96 yards last season. He struggled with his passing, though, completing only 44% of his passes for 160 yards.

Sophomore running back Ke'Shawn Vaughn (5'10" 205 lbs.) returns after leading Illinois last season as a true freshman. Starting in five games, Vaughn rushed for 723 yards and six touchdowns, averaging 4.6 yards per carry. Much of that production (322 yards) came against Middle Tennessee State, Purdue and Northwestern, though. With Josh Ferguson now off to the NFL, Vaughn will be the guy in 2016. Junior Kendrick Foster (5'9" 200 lbs.) rushed for 78 yards last season and will be battling redshirt freshman Reggie Corbin (5'10" 185 lbs.) to be the backup along. Redshirt freshman Dre Brown (5'11" 205 lbs.) likely would have been in the mix as well, but a torn ACL should keep him sidelined.

In 2014, Mike Dudek burst on the scene as a true freshman wide receiver with 1,038 yards receiving, earning second-team all-Big Ten honors. After tearing his ACL last spring, he had hopes of returning early, but ended up missing the entire season. This spring, he retore the same ACL, so he'll spend another season in rehab. Junior Malik Turner (6'3" 205 lbs.) caught 39 passes for 510 yards and three touchdowns is probably the biggest playmaker the Illini have returning at receiver. Sophomore Desmond Cain (5'11" 185 lbs.) started five games last season, catching 53 passes for 492 yards and a touchdown. But without Dudek and the departedGeronimo Allison contributing in 2016, it looks like Illinois may have some questions they won't be able to answer at receiver this season.

Three starters return on the offensive line this season, with senior right tackle Austin Schmidt(6'6" 300 lbs.) and junior left tackle Christian DiLauro (6'5" 300 lbs.) swapping sides this spring; both have started games since their freshman years. Hopes are high that redshirt freshman Gabe Megginson (6'5" 300 lbs) could start right away at right guard and make an impact. Senior center Joe Spencer (6'4" 300 lbs.) has also started every game since late in his freshman season as well.

SB Nation's analytics guru Bill Connelly found that last season, Illinois was much stronger on pass defense than they were stopping the running game. But with only four returning starters and a whole new coaching staff, it's a whole new ballgame on defense for the Illini. Lovie Smith groomed under former Nebraska defensive coordinator Monte Kiffin in Tampa Bay and used Kiffin's famed "Tampa 2" scheme in Chicago and Tampa. New defensive coordinator Hardy Nickerson, Sr. played under both Kiffin and Smith in Tampa and then coached linebackers for Smith in Chicago and Tampa. So while Nickerson, Sr. has never been a coordinator, it's reasonable to expect the Tampa 2 to be the foundation of the Illini defense -€” even if Kiffin later found that his concepts didn't work as well defending modern college offenses.

Three of four starters return on the line, and if Auburn transfer Gimel President (6'4" 263 lbs), who started nine games for Auburn in 2014, can replace Jihad Ward (second round draft pick of the Oakland Raiders) at defensive end, the Illini will arguably be just as strong, if not better, up front. Senior defensive end Dawuane Smoot (6'3" 265 lbs.) led the Illini with eight sacks last season. Pair him with senior defensive tackle Jarrod "Chunky" Clements (6'3" 290 lbs.), with 11 tackles for loss last season, and Illinois could have a pretty stout defensive line.

That stout defensive line may need to cover up for an entirely new linebacking corps, as Mason Monheim and Eric Finney graduated while T.J. Neal transferred to Auburn, essentially trading roster spots with Gimel President. Third-team all-Pac-12 linebacker Hardy Nickerson, Jr. (6'0" 230 lbs.) will slide into the open middle linebacker spot as a graduate transfer to play for his dad; he started 25 games at Cal with 112 tackles last season. The most likely candidates on the outside are junior James Crawford (6'2" 220 lbs.) on the strong side and sophomore Tre Watson (6'2" 240 lbs.); Crawford had 36 tackles last season and Watson had 21 as a freshman in 2015.

Last year's Illinois secondary held opponents to a 112.2 passer efficiency, but now it's a rebuilding project as only senior strong safety Taylor Barton (6'1" 215 lbs.) returns. Bartonled Illinois last season with four interceptions, and is also the Illini's leading returning tackler with 56. The projected starters at the other three spots -€” senior free safety Caleb Day (6'1" 205 lbs.), senior cornerback Darius Mosely (5'11" 190 lbs) and junior Jaylen Dunlap (6'1" 190 lbs.) - combined for 15 tackles in 2015. Those three did put up bigger numbers in 2014 in their backup roles, clearly the result of the dominance of the starters they were playing behind last season. Even so, the strengths of last season's Illinois defense have now become the biggest concern, and the biggest project for Lovie Smith and Hardy Nickerson, Sr. in their new roles.

Nebraska's offensive game plan last season against Illinois was difficult to rationalize, when you consider that not only was it playing to the strength of Illinois defense, it was also playing to the weakness of Nebraska's offense. And it showed, as Tommy Armstrong only completed 10 of 31 passes while the Huskers averaged 5.5 yards per carry on the ground. But that was last season and rehashing that is merely complaining about spilled milk. This season, it's a whole other Illinois defense with new coaches and significantly different players. Last season's weaknesses on the Illinois defense are now it's strength, and vice versa. That bodes well for the Huskers in 2016 against the Illini.

This post first appeared on Corn Nation, A Nebraska Cornhuskers Community, please read the originial post: here
People also like
Best Home Sauna To Stay Warm All Winter
How To Make A DIY Nature Mandala Craft
12 best staycation ideas you need when you can’t travel
A Different Script – Preparing for Legal Issues in Life and Medicine
Learn How To Save Money And Time When Tracking Your Trailers
How To Get Rid of Ticks in the Yard – 8 Steps
“The Friend Who May Not Seem a Friend” – The Cat and the Fire, Post 2 of 3
Music Profile: Elliott Waits For No One - Alternative Rock Band - Illinois, Usa | SRL Networks London Music PR
طريقة زراعة قصب السكر
Why Do I Have These Thoughts?