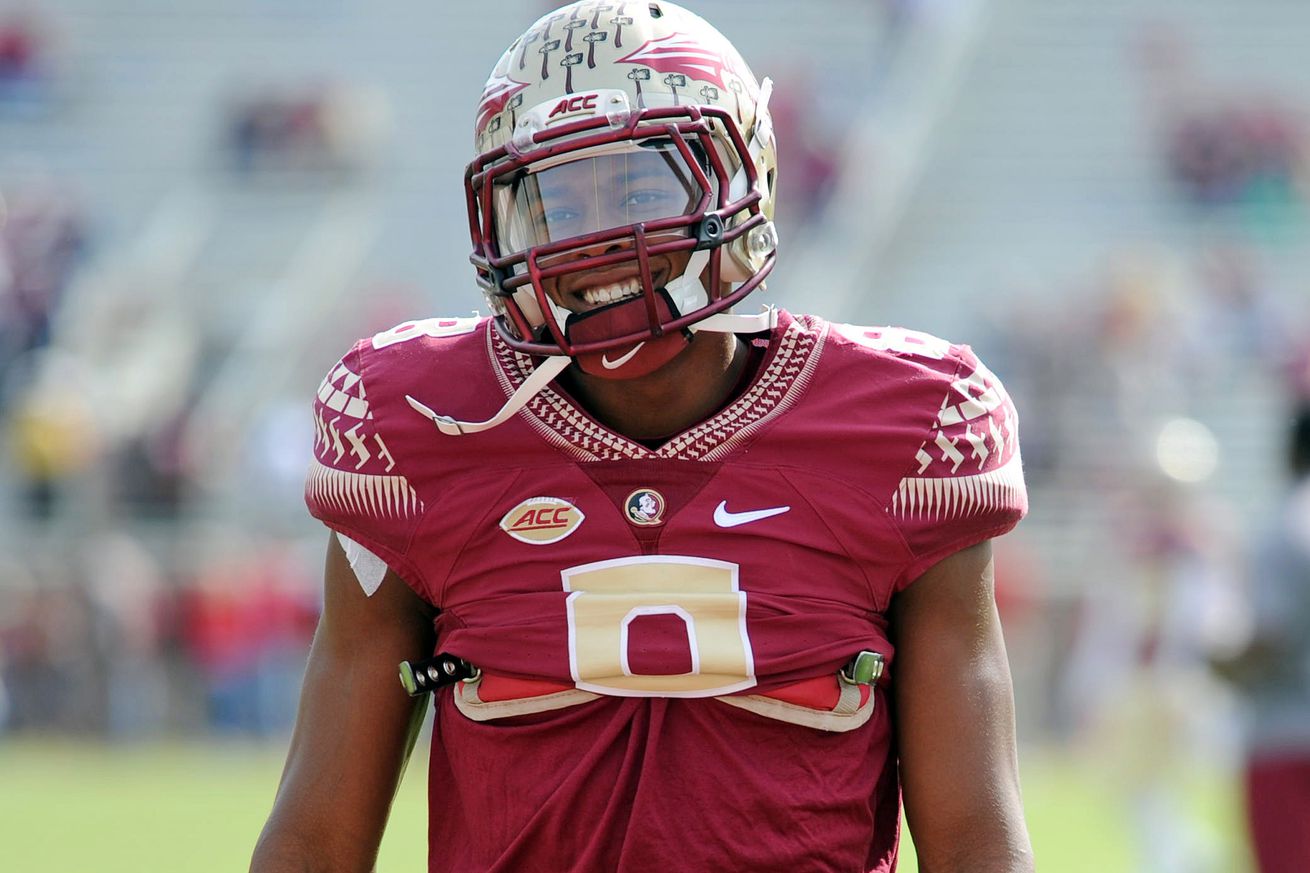 What is Jalen Ramsey's skill set as a defensive back? How will that translate into the NFL? Where is his best fit within the Jaguars defensive scheme?

With the No. 5 overall pick in the 2016 NFL Draft, the Jacksonville Jaguars selected Florida State defensive back, demigod, Mr. Universe, and just plain G.O.A.T Jalen Ramsey.

Since picking Ramsey, the Jaguars decision-makers have gone out of their way to make one thing very clear: Ramsey is a cornerback. There was a lot of debate before the draft on whether Ramsey would play cornerback or safety in the NFL, with people taking both sides, but the Jaguars put this to rest the second Ramsey was drafted. They want to place him on an island on the sideline and have him lock down a whole part of the field, in time.

So how does Jalen Ramsey translate to cornerback in the NFL? What did he do well at corner in college? How does he fit in the Jaguars scheme? Do we care that evaluating defensive backs without an all 22 angle of the entire field is nearly impossible but it is May so we are gonna do it anyways?

In the 2015 regular season, Ramsey played an outside corner position full time for a full season for the first time in his college career. He played some corner in 2013 but was eventually moved to starting free safety, and then in 2014 he played more of a rover role who played all around the defense.

But in 2015, Ramsey's responsibilities were cut down heavily. They placed him on the sideline across from each team's No. 1 receiver and simply told him to shut him down.

As expected with a player who moved around so much in his college career, there were some bumps in the road as Jalen tried his hand at becoming a shutdown corner. Most of these bumps revolved around him still trying to hone down his technique and playing both receivers and the ball differently.

The best example of Ramsey still being a work in progress on the outside is his game against Miami in 2015.

In this play, you can find one of the more prominent issues Ramsey had at corner in 2015. He uses his length and his 4.4 speed to keep up with the wide receiver down the field but simply does not find the ball soon enough. The second he turns his head, the wide receiver has him beat.

This is something that he should be able to get down with more reps. In 2013 and 2014 he was put in more situations where he could be facing the ball the whole play, making it easier to track. It was not something he had a lot of in-game experience in doing so by the time he was moved to corner. With that said, it is an area that you can expect him to still need some work on.

As I mentioned above, Ramsey's biggest strengths are using his length and his 4.4 speed. When a player that big and strong has that kind of reach and can run with anybody down the field, he is dangerous. But that reach can be rendered useless if he doesn't utilize it.

On this play, Ramsey doesn't get a hand on the wide receiver throughout the whole play. Cornerback is seen as a prevention position, and ideally, you want your corner to try to dictate the receiver's route and force a tougher throw. Here Ramsey fails to do so. I don't think he will have a problem dictating the routes of bigger receivers from the first game he plays as a member of the Jaguars, but the quicker types might give him some trouble.

But with the bumps along the road as Jalen develops his ability to play the ball in the air and dictating a receiver's movement throughout the play, there will be an abundance of positives.

The matter of the fact is that Ramsey is likely the most athletic defensive back to enter the NFL since Patrick Peterson. Players at his size, with his length and strength, should not be able to move the way he does.

And he is not simply a workout warrior. Every athletic trait that he put on display at the NFL Combine, he made sure to put on display each Saturday at Florida State.

Take this play for example. Ramsey sits back and reads the quarterback, letting the safety take the outside receiver. He drifts back with the receiver to try to bait the quarterback into a throw, and it works. He almost converts this play into an interception, but ultimately this play was only made possible because he knows he has the tools to sit back and do so.

And as for dictating a receiver's movement, it wasn't all bad with Ramsey. As much as he struggled with it at times, he also showed some of the most dominating and physical press corner play you will find at the college level.

As a cornerback, Ramsey had his ups and downs. But the tools were evident on every given down, and for the Jaguars that is what is important. They are getting the Jalen Ramsey moving forward, the one they can mold and improve. The one that can hopefully press a wide receiver right into Bill O'Brien or Mike Mularkey.

The greatest draft debate is one that reappears every draft cycle --€” should teams draft based on need, or best player available?

At No. 5 overall, Dave Caldwell did both.

"For us, he's a great scheme fit. He's got the length that we look for," the Caldwell said on the night of the pick. "For us and our scheme and what we look for, he's an ideal fit."

Honestly, it would be pretty difficult to uncover any arguments against Ramsey's scheme fit in Jacksonville. Jalen is a rare athlete and an asset to any team. For the Jaguars, Ramsey is a breath of fresh air -- a fiery personality with the mindset of a champion. Caldwell spent four picks in his first three drafts on cornerbacks, but the Jaguars have been unable to pickle any of these four players into long-term starters.

In fact, before Ramsey arrived in Jacksonville, the team's two best options at corner were two poached veterans -€”- Davon House and Prince Amukamara. By stealing Ramsey in the first round, the Jaguars have secured a revitalized opportunity to develop an in-house talent that, in the long run, should be able to unseat one of the top two corner roles.

"Being a press corner, I feel like I fit into their scheme perfectly," Ramsey revealed at his introductory press conference.

Of course, Ramsey's shutdown-corner potential should suffocate any nonsensical scheme concerns. The specifics of Ramsey's immediate role, however, are still very much up in the air.

"Well, I think we'll fit him in at corner at first and then obviously we will, with Aaron's (Colvin) four-game suspension, he will play inside too so we will let him compete there at some point in time," Caldwell told the media in his post-draft press conference.

Colvin's suspension creates an opening at the nickel corner position -€”- one that Ramsey will most likely spend time in during training camp. Still, it's difficult for me not to pencil in Ramsey above House or Amukamara for a premier corner role for Week 1.

Perhaps this is difficult because it's May, and I have seen neither Amukamara nor Ramsey play any type of legitimate football for the Jacksonville Jaguars. We'll learn more as the offseason unfolds.

One thing we know for sure -€”- the offseason moves fast for a rookie. As Hank suggested above, Ramsey is not a perfect prospect and he'll have to polish his game in the summer heat.

Perhaps Jalen is his own harshest critic.

"I feel like I can work on my entire game," Ramsey admitted after being drafted. "The physical part of the game comes pretty natural for me, but I will continue to work on my technique day in and day out."

With potential up to his neck and a BCS title under his belt, Jalen Ramsey may just be the most exciting defensive Jaguars addition in years.