Marrone: Report from Saturday is “kind of a joke” 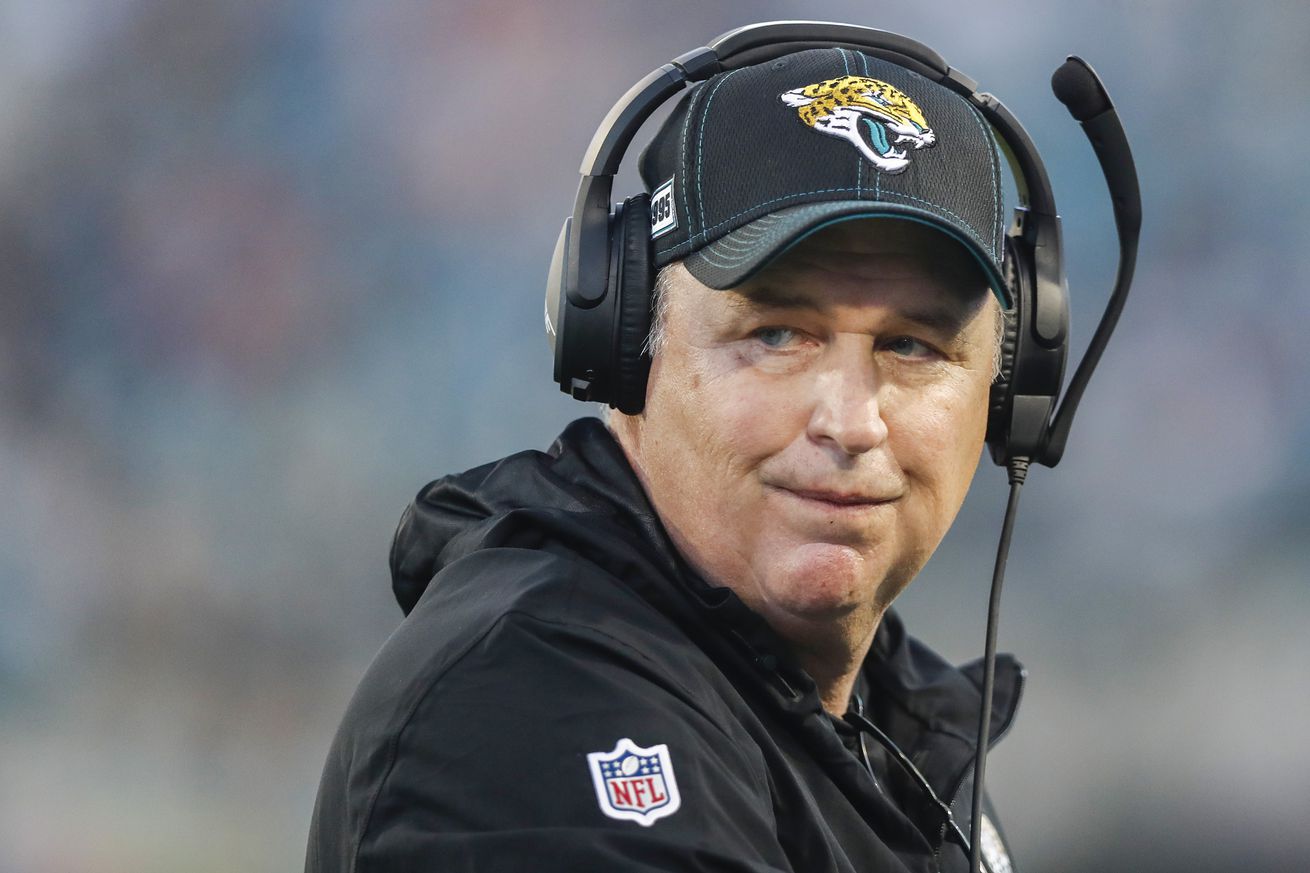 Over the weekend, a report surfaced from ESPN’s Dianna Russini that Jaguars head coach Doug Marrone had been informed he would be relieved of his duties following the team’s week 17 matchup against the Colts.

That report was then later disputed by Jaguars owner Shad Khan through his spokesperson, Jim Woodcock. This was further disputed by Khan’s son, Tony Khan who is currently the team’s Senior Vice President of Football Administration and Technology.

Woodcock stated, “Reports that Doug Marrone will be dismissed after Sunday’s game are 100 percent incorrect. Owner Shad Khan will meet with his football staff, which includes coaching and personnel, midweek next week.”

This remained true on Sunday when Marrone addressed the media following the team’s 38-20 victory over the Indianapolis Colts.

“Obviously the stuff comes out yesterday, which is kind of joke,” Marrone said. “because the one thing I know about [Jaguars Owner] Shad [Khan] and [Jaguars Senior Vice President of Football Administration and Technology] Tony [Khan] is that we’ve had communication and it would come from them.”

Marrone says the three have had a close relationship for quite some time, and even though it is not always public there has been constant support and communication with the Khan family. And while there has been open communication, any information regarding his status it would come from either Shad or Tony Khan, not nationally.

“That didn’t phase me. What I tried to do is make sure the players are focused on what they needed to do. We’re in a league where if you don’t play well, there are going to be a lot of things out there about a lot of us. For weeks now, it’s always been, ‘Hey, exit interviews, meeting during the week, coming up with a plan,’ and I think Shad and Tony are going to look and see if that’s the right plan and make the best decision.”

The Jaguars head coach will meet with the owners of the team later this week to discuss the future for the organization. One thing is clear, however, and that is that Marrone truly feels he can take this team to better roads, but understands that it is not up to him whether or not he will have the opportunity to do so.

“Obviously there’s always change in this business,” Marrone said when asked what gives hm the confidence that he can take the current roster and win with it. “We’ll get together, sit down, I’ll give my opinion, everyone will have opinions on it. Then, [Jaguars Owner] Shad [Khan] and [Jaguars Senior Vice President of Football Administration and Technology] Tony [Khan] will sit down and see if it’s what best moving forward for the organization.”

Changes will absolutely be made at some point whether it is this upcoming week or sometime in the near-future, however at this moment Marrone’s focus will be on if it makes sense. If any changes that are made are for the betterment of the team and that is some of what the head coach will voice concerns with to the ownership later this week.

“Obviously, I’m not going to communicate that here,” Marrone said of his opinions on what needs to be change or what doesn’t. “That’s for a private conversation. This is the way I feel. This is what we have to do. This is what I need. And express those opinions and if it is the right direction, then I’m the right person for the job, and if it isn’t, then I’m not.”

Depending on the direction Marrone and the Khan’s want to ultimately take in the very near future could decide the future of the Jaguars entire coaching staff, or at the very least it’s head coach.

“But make no mistake about it, [Jaguars Owner] Shad [Khan] and [Jaguars Senior Vice President of Football Administration and Technology] Tony [Khan] want to win. Whatever we have to do to win, it’s going to be about that.”

Marrone: Report from Saturday is “kind of a joke”