Nick Foles reflects on “roller coaster” of a season 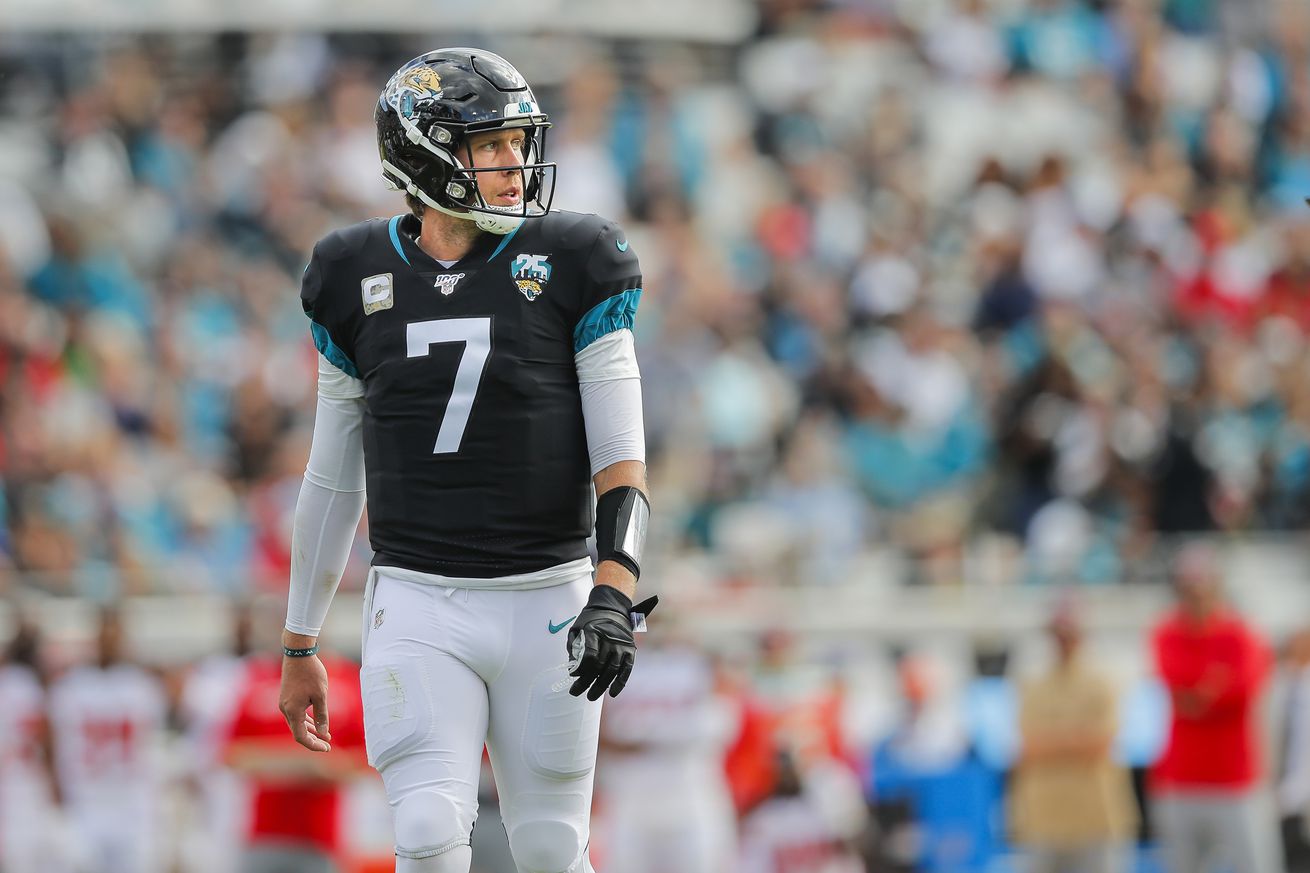 Now that the season is over the Jacksonville Jaguars will have to work hard over the offseason and into next year to figure out their plan at quarterback.

After the Jaguars signed veteran Quarterback Nick Foles to a four-year $88M contract including $50.125 on March 11th, 2019, Foles would go on to play only 184/1022 (18%) snaps for the Jaguars in a disappointing, “roller-coaster” of a year. The Jaguars are essentially stuck with the veteran for at least one more season as he would cost the team $33.125M.

“Been a lot happening this last year — our lives,” Foles told reporters as players began to pack their things for the offseason. “It’s one of those things where there’s been so much that has happened that it’s important to get away and just sort of take a breath and just sort of see from afar what everything I’ve learned, everything I’ve went through, the good, the bad, the ugly.”

Foles broke his left clavicle just 11 snaps into the 2019 season which began a downwards spiral in one of the most disappointing years of the 30-year olds’ career. He would later return for only three more starts in weeks 11, 12, and 13 only to be benched at halftime in favor of Gardner Minshew II. In total, Foles completed 77 out of 117 for 736 yards, three touchdowns and two interceptions on the year.

“This year’s probably been 10 times as hard as St. Louis,” Foles reflected. “So the magnitude of growth and learning from this year is way more than that, but I’m in it right now.”

In 2015, Foles underwent a brutal season as the starter for the St.Louis Rams starting only 11 games before being in benched in favor of quarterback Case Keenum. Foles nearly retired from the game of football after that season and said at the time that he had ‘no love for the game’, via CBS.com.

“So, the most important thing is to step away, and ultimately I know what I learned from that, and I know how it impacted me as a human being — which is a wonderful thing.”

What the future holds for the eighth-year veteran in Jacksonville remains a mystery. Foles will “live in the moment”, and see what the future brings in the next couple of months.

“I’m sure we’ll find out int he next couple months but I’m not gonna worry about it,” said Foles. “I’m just gonna continue being me. A broken record, but there’s a lot of things that I’m gonna learn from looking back from this year.”

The veteran quarterback has kept a journal throughout the entire process — one he hasn’t had the chance to go back and look at as of yet. Everything he’s gone through this season that he hopes to be grateful for in the future.

“I don’t know what my future holds but I ultimately know that I’m gonna continue to grow as a human being throughout it.”

Considering his near-retirement directly after the 2015 season, the question about his future in football was asked by members of the local media on Monday. A fair question, which Foles says it took him several months of going through an evaluation to figure it out int he past.

“I had a moment where I prayed about what I needed to do and it was ultimately getting back in football, facing my fear,” said Foles. “Fortunately, the good Lord’s allowed me to go through that before, so I pulled from my St. Louis year this year different things that I did, and the one thing I know is I look forward to whatever happens continuing to grow as a human being, player, excelling and ultimately and coming out slinging.”

Foles made it clear on Monday that he has no plans to retire as of right now, but what the future holds for the Jaguars and their veteran quarterback remains to be seen.

“Obviously getting away, refreshing myself, getting ready to roll. I’ll be ready to fire away.”

Nick Foles reflects on “roller coaster” of a season