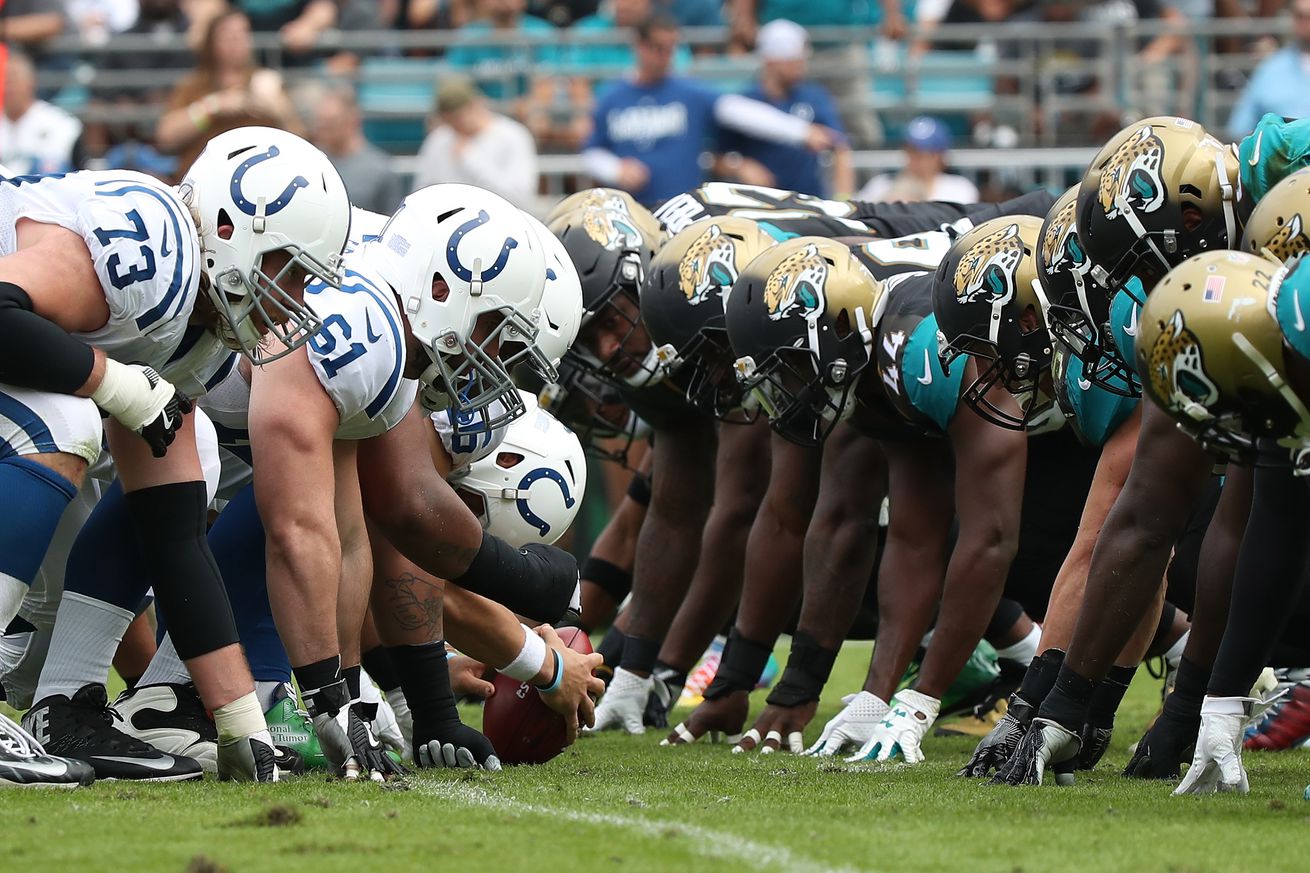 Following a bye week, and less than stellar start to the first half of the season, the Jacksonville Jaguars hit the road to take on the AFC South rival Indianapolis Colts at Lucas Oil Stadium on Sunday. This is a must-win game for Jacksonville to keep its slim AFC South title hopes alive.

Hopefully the Jaguars were able to use the bye week to correct the on-the-field issues that were plaguing the team, as well as try to get the team chemistry and morale up. Jacksonville is basically in survival mode from here on out, and cannot afford to lose if it wants to make it back to the postseason.

It’s time to get back to our weekly history lessons. Let’s recap the head-to-head series between the Colts and Jaguars.

Interesting takeaway: Jacksonville swept Indianapolis last year, and that was just the second occurence ever that the Jaguars were able to win both games against the Colts in the same season (2011-2012 season was the first time).

Quick thoughts: The Jaguars have defeated the Colts in four of the past five contests, but Indianapolis had won all six games prior to that. Looking at the full history, the Jags and Colts only met twice prior to the conference realignment in 2002. Indianapolis (AFC East), beat Jacksonville (AFC Central), in both of those contests. Then the Colts won the next three games while both teams began competition in the AFC South. Jacksonville finally got its first win against Indy in 2003, and another one the next season in 2004. The Colts hold a large advantage overall, but the series is tied at seven wins a piece since 2011.

Quick recap: Blake Bortles tends to beat up on the Colts, and he did so twice in 2017. On this particular day, Bortles completed 74 percent of passes for 309 yards, two touchdowns and zero turnovers. Leonard Fournette added a touchdown, and Josh Lambo tacked on a couple of field goals. A lot of wide receivers got involved with Marqise Lee securing seven catches for 86 yards and a touchdown, while Keelan Cole had 49 receiving yards and a score, and Dede Westbrook added six catches for 78 yards. The defense had a strong performance with four sacks and two interceptions. Brad Nortman even completed a pass. It was a great all-around performance — man, I miss 2017.

Quick recap: Even without Leonard Fournette, the Jaguars rushed for 188 yards on the legs of T.J. Yeldon and Chris Ivory. This was another strong performance from Blake Bortles, who had 330 passing yards, one touchdown, zero interceptions and a quarterback rating of 124.7. The defense was incredible, sacking Jacoby Brissett 10 times and holding Indianapolis to just 232 total yards. This was also Josh Lambo’s first game as a Jaguar, and the kicking game concerns from the previous weeks of that season were quickly put to rest as he made all of his extra point and field goal attempts. This was pure domination by Jacksonville, and the end result was the Jaguars’ first shutout win since 2006.

Quick thoughts: While the Colts dominated early, winning eight of the first 10 matchups overall, it is the Jaguars that have been making a comeback. The Colts held the advantage in the 1990s (granted, that was only one game in Jacksonville’s first year as a competing NFL franchise) and early 2000s, but Jacksonville has closed the gap. As mentioned earlier, the series is tied with seven wins each since 2011, and since 2008, Indy’s advantage is just 11-9. Indianapolis easily dominated from 2000 through 2010, which gives them the lopsided advantage in the series overall. But perhaps times are changing.

This year’s matchup is an important game for both teams currently sitting at 3-5 and looking to make a run after an unspectacular start. The Colts have won two in a row and are humming on offense, but their defense leaves a lot to be desired. Meanwhile, the Jags have struggled with giving the ball away, lack of protection and lack of a run game on offense, while the defense has not made enough of the necessary big plays (turnovers, sacks, etc.) to mitigate the offense’s ineptitude. Something has to change this week, and I think it does. The Jags get the big divisional win on the road.

Which team do you believe walks away victorious in this AFC South battle?