Can we just take a moment to appreciate what Jalen Ramsey and A.J. Bouye are doing? 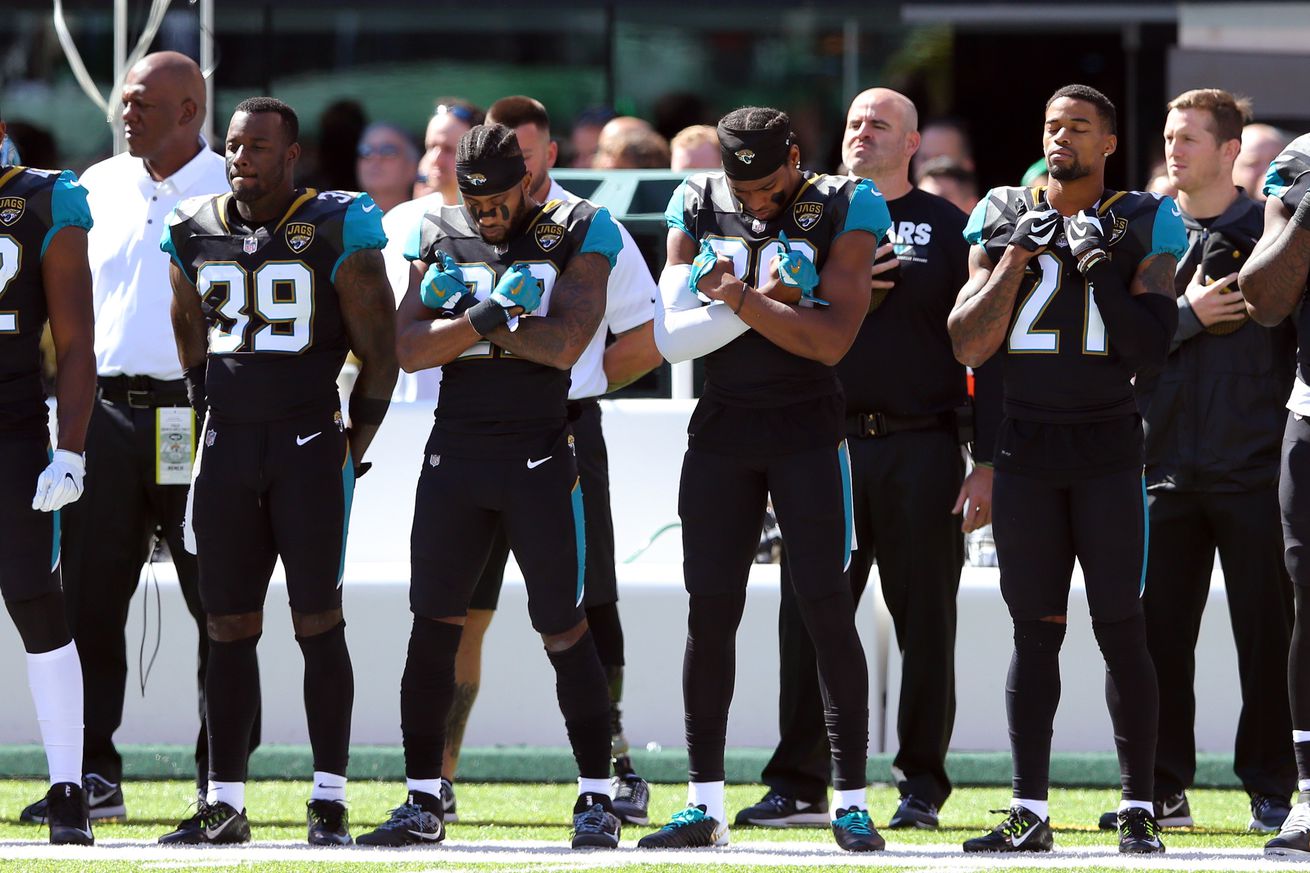 This cornerback tandem has been unbelievable.

The improved pass rush has certainly been a big reason for Jacksonville’s vast improvement, but the guys playing on the outside have been incredible. Jalen Ramsey and A.J. Bouye have been locking guys down all season.

But you can truly admire what they’re doing when you look at some more advanced statistics.

On contested throws, the two have combined for two receptions for 58 yards allowed on 21 targets, with four interceptions.

Both Bouye (seventh) and Ramsey (third) rank among the top-seven cornerbacks in the league according to Pro Football Focus. Ramsey’s grade of 90.5 after six weeks puts him in “Elite” status at his position, while Bouye’s grade of 87.5 puts him with “High Quality” company.

Ramsey is the highest graded Jaguars defender on a defense that PFF ranks second overall in the league after six weeks. And per the article linked above, check out this snippet of information:

Calais Campbell has sacked the quarterback 10 times through six games, and the passer rating of opposing quarterbacks is worse when targeting CBs A.J. Bouye and Jalen Ramsey than it would be if they just threw the ball into the stands every play.

Ramsey did allow his highest passer rating against this past week against the Los Angeles Rams (102.1) by allowing three catches on four targets. However, the Jaguars held Jared Goff, who was averaging around 280 passing yards per game, to just 124 yards. The entire wide receiver group for the Rams combined for just 116 yards, and Sammy Watkins was held to one catch for 11 yards on four targets.

Ramsey also didn’t allow a single yard after the catch on Sunday. He is among the best in the league at stopping receivers immediately. Through the first quarter of the season, Ramsey led the league in yards per cover snap with a mark of 0.30, and he continues to be strong in that area.

People are taking notice of Jacksonville’s defense and the importance of the new additions this offseason. Bouye, along with Campbell, was recently named as one of best 2017 offseason additions by NFL.com.

In terms of defensive efficiency, the Jaguars are playing at a ridiculous level. Through the first six games, Football Outsiders show us that Jacksonville ranks first in defensive DVOA at -20.7 percent and first in pass defense at -45.7 percent.

The Jaguars rank first in the league against No. 1 receivers, 12th against No. 2 wide outs, No. 6 against tight ends and No. 7 against running backs catching the ball. Football Outsiders also shows us that in terms of field direction, the Jaguars are the toughest team to throw on in both the middle of the field and on deep passes. The Jags rank No. 3 on passes to the left side of the field.

Football Outsiders does put in a disclaimer that opponent adjustments are only at 60 percent right now, but come on, these numbers are insane. And Jacksonville also ranks first in FO’s DAVE category, which is a formula combining preseason projections with 2017 performance and gives a sense of how a team is expected to perform the rest of the season.

Bouye and Ramsey are the culprits of why Jacksonville ranks so highly in these advanced analytics. Simply put, they’ve been incredible. Not to discount Aaron Colvin and Barry Church, as each has been solid, but not spectacular, in their roles. Tashaun Gipson has been more than solid, ranking as a top-10 safety so far this season.

Even if you’re a person who doesn’t believe in the analytics craze, the play of both Bouye and Ramsey certainly passes the eye test.

Ike Taylor somewhat surprisingly listed Ramsey and Bouye as the No. 1 cornerback duo in the league during the summer.

Now we know why.

Can we just take a moment to appreciate what Jalen Ramsey and A.J. Bouye are doing?