Where should you be drafting Jaguars players in fantasy football? 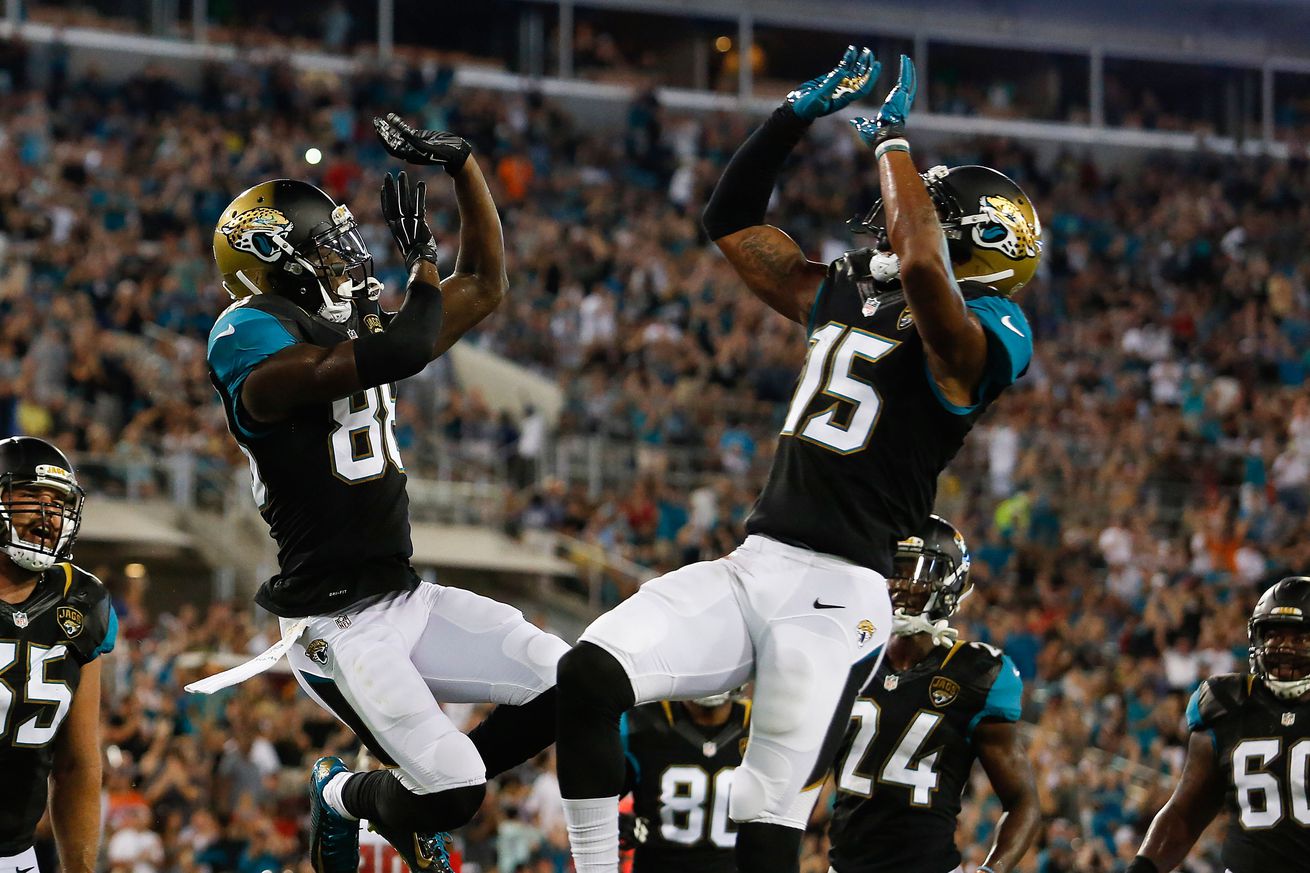 As the NFL quickly approaches, Fantasy Football drafts are currently underway. The biggest question? Do we draft Jacksonville Jaguars players, and if so, when?

Fantasy football is back! What a time to be alive.

The only thing better than drafting your fantasy football team is the fact that you have the opportunity to draft players from your favorite NFL team.

While it's encouraged to draft players from your favorite team, too many fantasy football players make the mistake of reaching for their favorite players, thus sacrificing the potential of more valuable players in the process.

The Jaguars are nothing short of stacked on offense, and their defense has the potential to be top five. Let's break down the fantasy implications of each Jaguar player and where to draft them.

Most noted as being the breakout player of 2015, Allen Robinson was an absolute nightmare for opposing defenses. Robinson was/is the shining star of the Jags, and his 2015 stats were nothing short of spectacular.

With 80 receptions, 1,400 yards, and 14 touchdowns, Robinson could easily make the case as a first round fantasy draft pick.

But should you draft him in the first round?

While most Jaguars fans hope for Robinson to build on his 2015 season, there is a larger chance for regression.

Many of Robinson's stats came from the Jaguars playing from behind and throwing the ball significantly more to catch up.

With the emergence of Allen Hurns as a reliable WR2, a more balanced run game, and getting Julius Thomas more involved, it looks as if Robinson's targets could see a decline from Blake Bortles in 2016.

Where to draft him: Robinson's average draft position (ADP) is hovering around No. 12, so if you're playing in a 10-team league, expect him to be gone by the early second round. Because of the projected regression, hold strong on not drafting Allen Robinson in the first round, but if he's still available in the middle of the second round, jump on the opportunity.

Bortles was quite the fantasy surprise last year, providing extreme value for fantasy football players who are a fan of drafting quarterbacks late or even streaming them.

For 2016, Bortles' success rests solely on the offensive line and overall defense. If Bortles has the protection and trust of the offensive line, he most certainly has the surrounding weapons to be successful.

With the running game potentially becoming established, and a defense that keeps the game close, Bortles will hopefully get quality looks and limit turnovers.

Where to draft him: With the quarterback position being as deep as it is this year, Bortles should be available very late in your draft if you're planning on waiting on a quarterback.

Allen Hurns was barely a bleep on any fantasy player's radar last year but proved to be a huge waiver wire pickup.

Hurn's 64 receptions, 1,031 yards, and 10 touchdowns solidified his WR2 position in both the NFL and fantasy.

The Jaguars also extended Hurn's contract, making him an integral part of the Jaguar's offense, and a strong compliment to Allen Robinson for 2016.

The biggest question surrounding Hurns will be if he can build on a stellar 2015 season or if he will experience the same regression as Allen Robinson in a more balanced offense.

Where to draft him: Hurn's ADP comes in around No. 71, which means you would ideally like to draft him in the 7th round or later of a 10-team league for maximum value.

What's looking to be a running back by committee (RBBC), Yeldon and Ivory compliment each other's skills, which should provide an immense upgrade to the Jaguars' running game.

T.J. Yeldon came on strong late in 2015, after fending off some earlier injuries. He may have a lower floor than Ivory , but his ceiling is much greater. While Ivory will initially see a larger workload and goal-line carries, Yeldon will be highly valuable on 3rd downs and the passing game.

Chris Ivory was no slouch in 2015 with the N.Y. Jets, with 247 attempts 1,070 yards, and 7 touchdowns. A true North-South bruiser, Ivory has the goal line presence the Jaguars need.

Ivory should see about 60% of the carries as the starting running back, and the majority of the goal line carries, as long as he can stay healthy.

What's valuable in drafting either Yeldon or Ivory is if you're adopting the Zero RB Strategy for your team. Because the Jaguars are initially committed to a RBBC, Yeldon and Ivory should be available mid-late rounds of most drafts.

Where to draft them: These players draft value will come down to the type of league you're playing in.

If you playing in a standard league, I would value Ivory over Yeldon for a deeper value purely of the goal line touches.

If you're playing in points per reception (PPR) league, Yeldon has the bigger play potential and pass catching abilities.

Thomas's first impression with the Jaguars fans was not a great one, missing the first 4 games recovering from hand surgery. After returning, it was a very slow start, but Thomas eventually started to show his value, especially in the red zone.

Heading into the 2016 season healthy, Thomas should be more involved in the overall balance of the offense. With both Allen Robinson and Allen Hurns drawing much of the secondary, Thomas should see single linebacker coverage which allows for his large physique and athletic ability to extend plays for large gains.

Where to draft him: Tight end is always a tricky position to draft for. It usually seems like Rob Gronkowski is No. 1, and the next 10 tight ends can all be lumped together.

Thomas is one of those TEs you can draft extremely late while still having huge potential in a more balanced offense. Don't reach for him, but definitely make him a late round target if you wait on the position.

Some of the biggest offseason moves were made to bolster the Jaguars defense. With the acquisition of Malik Jackson and Tashaun Gibson, along with drafting Jalen Ramsey and Myles Jack, the combination of veteran players and new talent look to be a vast improvement from last year.

While the defense continues to trend positively, we can only hope the rookies can mature at a quick rate and vastly improve the secondary.

Where to draft them: One of the biggest pieces of fantasy football advice you'll see out there is not to draft a defense or kicker until your last two picks, and this is absolutely the case with the Jaguars.

While they have the ability to be a top-five defense in the next few years, the 2016 season will be a year of experiment.

Tread cautiously on this one.

Where should you be drafting Jaguars players in fantasy football?