Whatever happened to: the Rugby Song?

Following an initiation ceremony at Howe of Fife RFC during which a player suffered internal injuries (having reportedly had a bottle inserted into his anus), the Scottish Rugby Union recently handed out a record 347 weeks of suspensions to 14 players, a coach and a club official.

Now, while I’m sure that, back in the day, behaviour was nowhere near whiter than white, I honestly don’t recall it ever crossing the line to anywhere near the extent outlined above. 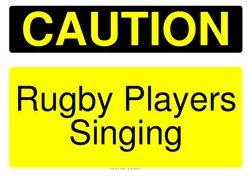 Prevalent throughout my playing days, however, was the almost compulsory post-match singing of songs in the clubhouse bar deep into the evening. Which begs the question: Whatever happened to the Rugby Song?

I have to say that, no longer being a regular at clubhouse bars late into the evening, this is a question to which I genuinely do not know the answer.

What I do remember, certainly from the eighties, is that the lyrics to most of the songs sung were – when analysed in the cold light of day – fundamentally offensive. No offence was intended of course (to the drunken juvenile rugby mind it was all just harmless frivolity) but there’s little doubt when I look back that there must have been people who would have been awfully offended at song lyrics which were basically either sexist, racist, homophobic, misogynistic or, indeed, all of the above.

Certainly having grown up a (tiny) little bit I have come to realise (although I’m sure the “political correctness gone mad” brigade will disagree) that whether something is offensive or not can only really be decided by the person it affects and I do cringe with a certain amount of shame at some of the words used in songs I used to sing with gusto.

Hand on heart, I would certainly apologise to anyone I offended at the time and can only hope that in these more enlightened times such songs have been consigned to history.

That said, I’m convinced that, at its essence, the clubhouse sing-song can be an extremely valuable and enjoyable team experience, helping to forge bonds and cement friendships between clubmates. There is no reason, however, why songs need to be so offensive or distasteful and I remember, during the nineties for instance, happily belting out various classics from the likes of Tom Jones, Neil Diamond, Don Mclean and John Denver, amongst others. Whilst my taste in music and vocal quality may not have been everyone's cup of tea, at least I can be confident that no one would have been overly upset.

So, whatever happened to the Rugby Song?

In it’s traditional unpleasant and objectionable form I sincerely hope that the Rugby Song is dead and buried. But equally I trust that communal clubhouse singing to accompany the quaffing of beer will remain a staple ingredient of rugby clubs throughout the land for many years to come.

Whatever happened to: the Rugby Song?