There was a time when the teams at the Premier League summit would go into matches against one another exercising caution and contesting dull, cagey low scoring encounters that did nothing to back up the claim that the English top flight is "The Best League in the World". However, all that seems to have changed this season. Who would have thought at just a quarter of the way through the campaign we would have seen the kind of jaw-dropping, pinch yourself, lay off the LSD type of scorelines from the head-to-heads between the top clubs? Manchester City have demolished crosstown rivals and current champions United. They also went to White Hart Lane and tore Champions League hopefuls Tottenham a new one. Spurs themselves responded to that beating by giving Liverpool something of a pasting.

Then there's Arsenal. A truly disastrous start to the season was compounded with a miserable afternoon at Old Trafford. The astounding 8-2 set back against Manchester United was less a football match but more a kind of snuff film. Going into this weekend's game against Chelsea at Stamford Bridge, not many people would have given them a prayer. I'm willing to bet that, to a man, every single Arsenal supporter on the planet would have taken a draw if offered on Friday evening. But alas, this unpredictable mistress that we call football pulls another surprise from of her bag of tricks in the form of the Gunners' astonishing 5-3 victory.

One of the many criticisms levelled at Arsenal over the weeks (years?) concerns a supposed lack of leadership. If Robin van Persie's umpteenth barnstorming performance and subsequent hat-trick are not considered a form of leadership then you're going to have to sit me down in a classroom and have a qualified teacher tell me what is. He may not be the 'shouter' that we are told every team worth their salt requires but by God does he lead by example. His latest treble made it 28 goals in 27 league matches this calendar year. If other players in the Arsenal team could find a level of consistency anywhere near that, then the team would be in far better shape that it currently finds itself. 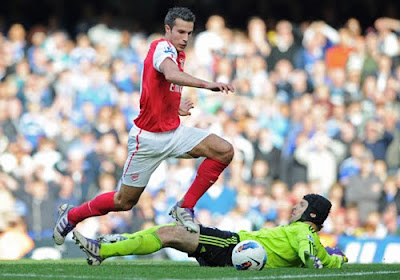 One player in particular whose general performances are about as random as a bag of licorice allsorts is Theo Walcott. Having had something of a hit and miss season (career?), young Theo reserved his best showing for Saturday when he gave Ashley Cole more problems than a hairdresser with a kiss and tell story. His contribution to the scoresheet was something special too.

Having gone behind twice and then allowing Chelsea to equalise at 3-3, It was a surprising turn up for the books to see the Arsenal team stand firm and show rare but tremendous character to win the match so emphatically. Especially given the frequency of humiliating collapses that have occurred far, far too often in recent years. The win puts them just 3 points behind their vanquished opponents and, whisper it, back on course to challenge for a top four finish.

Since that fateful day in Manchester, talk of the club's supposed demise have filled more column inches in the Sports media than anything else. The number of back page leads declaring a crisis at the Emirates would probably exceed the number of journalists employed to write them.

What has gone unnoticed it would seem is the fact that since a befuddling 4-3 setback at Blackburn, the supposedly beleaguered Arsene Wenger has now led his team to 8 wins in 9 games in three competitions. If that's a crisis, 95% of football teams must be in complete meltdown.

More so than most teams, discussion of Arsenal falls foul of that lazy way of observing football whereby if something isn't fantastic then by default it must be complete shit. No other club is spoken of in such black and white terms and we're all guilty of it. The football is always described as 'wonderful' even when it isn't. The youth policy is always described as a success even when things go a bit Jérémie Aliadière. On the flip side, failure to win a trophy for a few years apparently means that the whole club needs rebuilding from the top down. People also draw the conclusion that selling player X automatically means the club is in freefall. Arsene Wenger is either a genius or a clown. They MUST buy or they MUST not. There is very rarely middle ground. Nobody in Islington will pretend that all is rosy in the Arsenal garden but the apocalyptic headlines that have been written about the club this season have bordered on absurd. The team have definitely started to show signs of turning that mythical corner.

Admittedly, the recent good run hadn't exactly seen them take on the cream of world football and they have been blessed with a number of home matches so when people spoke of a trip to Stamford Bridge being a 'true test' of any supposed Arsenal revival, the point was most certainly a valid one especially given that their last league win on the road was waaaaaay back against relegated Blackpool in the spring.

Not only did they pass the test, but they pretty much received top marks. It's not quite time to proclaim the second coming of the Invincibles but it might make one two people think twice before writing eulogies for the North Londoners.

Of course, one thing that still seems inescapable are the prevalent frailties in defence. Arsenal's makeshift backline was typically far from secure. Andre Santos, Per Mertesaker and Johan Djourou had a torrid time of it on Saturday lunchtime and were culpable for at least two of the three goals conceded and made a number of other laughable mistakes throughout.

However, if this is an accusation you can lay at the door of the Arsenal team, what then does one say about Chelsea? The Blues conceded five at home. FIVE! An unthinkable scenario in recent years. Since their Abramovich-funded ascension up the table, one thing you could always say about Chelsea was that they were built on a solid defensive base. All that seems to have gone straight out of the window because right now, they look a complete mess. In Jose Mourinho's first year in charge, they conceded a miserly 15 Premier League goals all season. They've conceded that many in just 10 games this year. Last week, our learned friends in the football media pointed the collective finger at the erratic David Luiz. This week the Brazilian wasn't in the side which would suggest that there is something wrong with new manager Andre Villas-Boas' tactical approach which, while very exciting going forward, evidently leaves them far too vulnerable at the back. The personnel hasn't changed but it's obvious they are playing a far more open game than they are used to.

If they are to make waves domestically and challenge for the ever-elusive Champions League crown in Europe, something needs to be done to shore things up because the ease at which Arsenal were able to slice them open time and time again, is something that will encourage any half decent side Chelsea will face between now and the end of the season.

All that said, I'm sure I speak for most people when I say that John Terry falling on his face for Arsenal's all important fourth goal filled me with great joy and wonderful, wonderful feelings of schadenfreude. Karma is a bitch, isn't it, John? 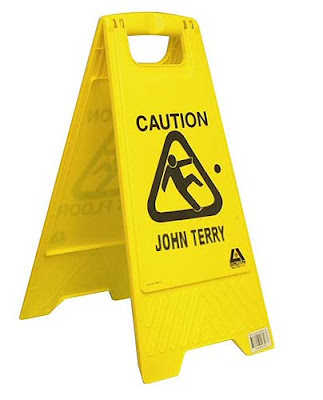 Away from West London, it was a pretty unremarkable weekend in the Premier League (I write this before the inevitable 6-6 draw between Stoke and Newcastle on Monday night...). Spurs and Liverpool both won as expected against QPR and West Brom respectively. Gareth Bale appeared to have made Sky's Super Sunday panel simultaneously climax as he scored an impressive brace for the former in comfortable 3-1 win that taught us nothing. Meanwhile, my love-hate relationship with the odious and despicable Luis Suarez continued as he put in another scintillating showing in the Scouse side's 2-0 win at the Hawthorns.

Special shouts to Norwich and Swansea who continue to perform above expectations. Blackburn's draw at Carrow Road was the only point picked up by either them, Bolton or Wigan in the bottom three. Things could and should have been better for Rovers who were cruising at 3-1 and were very unfortunate to have a last minute penalty awarded against them as the match ended 3-3. It almost makes you feel sorry for Steve Kean... almost!

People looking for a 'reaction' from Manchester United after their pummelling last weekend may well have been left disappointed after the reds laboured to a Javier Hernandez inspired 1-0 win over Everton. People spoke before the game as though Sir Fergie's team would show up at Goodison Park and tear the Toffees to shreds. Or more fittingly, chew them up and spit them. That was never going to realistically happen but more important than achieving a 'big' win was just getting any sort of win at all. As an added bonus, United kept a clean sheet a huge and significant achievement given the many question marks over their defence.

Keeping pace at the top of the table, City beat Wolves fairly comfortably for the second time in a week without really breaking a sweat and despite being reduced to ten men. If you're wondering whether that is down to how good City are or how much Wolves are struggling at present, I can confidently and lazily state that it's both.

Landmark beach Lagos: All you need to…
Tellaman – Whipped ft. Nasty C & Shek…
A Boss vs a Leader; What’s the Differ…
How to Keep Him Interested in You For…
Flor y Jazmín: La pareja lésbica de «…