Could Isco be that rumoured special signing 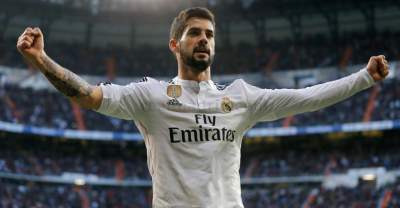 A purchase depends upon us moving some players on and that looks entirely possible given the level of interest there has been in our squad this summer. There are plenty of clubs chasing players like Mason so departures are quite possible yet, indeed it would be a surprise if there weren't any.

One name in the frame is 24-year-old (25 next April) Francisco Román Alarcón Suárez, more commonly known as Isco. The attackihg midfielder who joined Real Madrid from Malaga, has offers from Manchester City and Juventus. Roman want him, AC Milan another, he is on the wanted list of a host of clubs and can take his pick.

Mauricio Pochettino has been looking fr a central attacking midfielder all summer, we have been linked with many but not managed to secure one yet. Christian Eriksen, who generally plays from the left has been a disappointment so far this season having had his third poor game in a row yesterday. It hasn't made any difference when he has been switched central during games. His inconsistency is a problem.

Real Madrid manager Zinidine Zidane has a wealth of talent at his disposal, James Rodriguez has fallen out with him over his lack of game time and in his last press conference he suggested there was still time for Rodriguez and others to leave. It is though Zidamne is under proessure from president Florentino Pérez to trim the squad.

The Spanish international, he has 14 caps (1 goal). is reportedly on £60,000-a-week wages which clearly we could improve while offering him regular football and importantly UEFA Champions League football. The Spaniard is only under contract until 2018 so a season-long loan deal with an option to buy shouldn't be prohibitive.

He is the sort of signing that would give everyone a boost, would appease the fans who can't live without a meaningless 'statement of intent' signing, which is basically a name to boost their own ego. More important is a player who fits our system and fits into the team environment and Isco has the versatility to be an effective member.

Currently Isco isn't playing because he has suffered a talofibular ligament sprain in his right ankle and is quoted as being out indefinately.

Could Isco be that rumoured special signing