I had a bad feeling about this fixture all week, Jurgen Klopp's promise to play a youthful side was true; Ejyria, Trent Alexander Arnold, Ojo, young Woodburn all started along with the more experienced Lucas Leiva, Can and Origi.
What we witnessed was a lethargic, lateral and ineffectual performance against an utterly defensive Plymouth team defending for their lives.
Defend it they did, despite Liverpool-lite having 85% possession, they rarely troubled the Plymouth goal keeper in 96 minutes of football at Anfield. 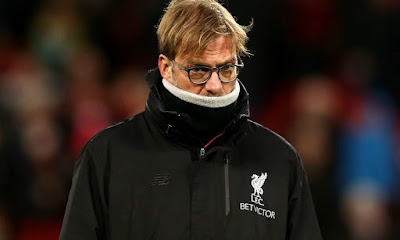 Klopp offered his apologies but the Plymouth manager was in a much more exuberant mood:    "It is probably one of the best defensive performances Anfield has seen," said manager Derek Adams.
"We limited Liverpool to not many opportunities. We dealt with them well and the players have worked extremely hard.
"It would be naive as a manager to come to Anfield and think you can go at top class players.
"We are a League Two club, they are a Premier League club with players at international level.
"We allowed them time but didn't allow them space.
"This was about a team performance. We had 13 players and they all deserve a huge amount of credit."
Liverpool dominated possession but did not do enough to trouble goalkeeper Luke McCormick, as Klopp's youngsters found their way blocked by a green wall of players.
"They could have had 90 per cent if they wanted, the game plan was to not let them score," added Adams, who is already looking forward to the replay at Home Park.
Asked what Liverpool could expect in the return fixture he said: "Welcome to the real world."
The real world indeed, an ultra-negative manager with ultra-negative tactics, no pride in that.