Matches to Make After WSOF 32

This past Saturday the World Series of Fighting held Wsof 32 Moraes vs. Hill 2. The event was headlined by a rematch and bantamweight title fight between Brazilian, Marlon Moraes, and Canadian, Josh Hill. Hill who lost the first bout via decision fell victim to a devastating head kick a follow up punches in the second round. 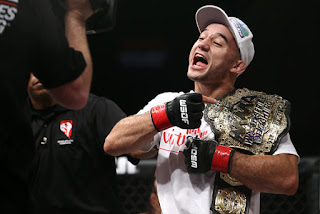 Moraes is wasting his prime against lower level talent
Marlon Moraes vs. winner of Magomed Magomedov vs. Jesse Brock: This theortical match up needs to be prefaced with the fact that Moraes is not a World Series of Fighting level fighter. Over the course of his ten fight career with the organization, he has proven to be much more. Ideally, Moraes would move on to greener pastures with the UFC - something the fighter mentioned he wanted in his post fight interview. However, that requires WSOF and Ray Sefo giving their blessing to the bantamweight champ. Of course, Moraes could be the best example of why a transfer system should be implicated in MMA. Read our piece on the subject Could Transfer Fees Work in MMA?

In the meantime, WSOF has three options; save Moraes for a rumored New Year's tent pole event, "loan" Moraes to Rizin to gain exposure or schedule Moraes against the winner of Dagestani, Magomed Magomedov and newcomer, Jesse Brock.

Granted, the Magomedov, Brook bout has not even been hinted at by the organization. It is the match up this writer would like to see happen. Magomedov also known as "Tiger" is a 24 year old fighter with a 13-1 record. The 5'7 Dagfighter representative has previously fought in M-1 and is on an eleven fight win streak.

Like Magomedov, Brock is a WSOF newcomer, though, one signed with a bit more fan fare. The Boise native stands 5'4 and fights out of Combat Fitness and SBG Idaho. Overall, Brock is 22-8 in a career that has seen him fight in Bellator and RFA and against former UFC lightweight contender, Donald Cerrone, and current UFC flyweight champ, Demetrious Johnson. Brock would be facing Magomedov on a six fight win streak. Read more at World Series of Fighting May Have Its Next Bantamweight Challenger

It's time for Dawodu to vie for the title
Lance Palmer vs. Hakeem Dawodu: In addition to the championship fights at WSOF 32, 25 year old Hakeem Dawodu took on Russian, Marat Magomedov, winning by technical knockout in the second round. Dawodu is unique in that he is a born and bred WSOF fighting. The Canadian fighting out Champion's Creed MMA and Mike Miles Muay Thai and Kickboxing has six wins in a seven fight career. Dawodu's lone hiccup was a draw to Magomedov in December 2015. While the 5'8 striker may only be 25 years old, WSOF would be wise to fast track the fighter known as "Mean" to a title shot. Dawodu is interesting fighter given that he is undefeated, has won all of his fights by KO or TKO and is a truly WSOF byproduct.

In Lance Palmer, Dawodu will be facing an 11-2 fighter and current featherweight champ, The Team Alpha Male member from California has losses only to Alexandre Almeida, who he beat in the rematch and title shot on Saturday by majority decision, and former WSOF featherweight champ and current Bellator fighter, Georgi Karakhanyan. "The Party" is 4-2 in the WSOF, but given his title shots won of the organization's most recognizable faces. The 5'6 28 year old has notable wins over Chris Hordecki and Rick Glenn.


Louis Taylor vs. Clifford Starks: Louis Taylor made his case for a middleweight title much stronger last Saturday with a guillotine choke win over Phil Hawes in the second round. Taylor who has one of the most unique nicknames in the sport - "Put the Guns Down" - is now 2-0 in the WSOF and 13-3 overall. The 37 year old 5'11 fighter trains at Chicago Fight Team. A veteran of Strikeforce and Bellator, Taylor has an exciting style with 12 wins by knockout or submission.

It is another veteran, Clifford Starks, that holds the key to Taylor's title shot against current champ, David Branch. Starks, a former Rage in the Cage, Shark Fights and UFC fighter, also fought went 2-0 with Bellator recently. Another factor that makes Starks the "name" win Taylor needs, is the Starks is a former contender most recently tangled with Branch for the middleweight belt in April. Starks is now 2-1 in WSOF. He holds notable wins over Dustin Jacoby and Mike Kyle.

Matches to Make After WSOF 32