Despite a doping suspension and contract with the UFC, former UFC light heavyweight Champ, Lyoto "The Dragon" Machida, is keeping busy. 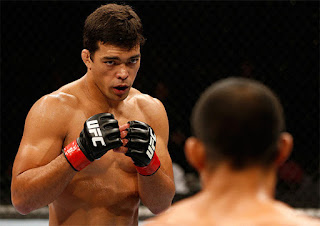 Earlier this year, Machida, who is 22-7 overall in his MMA career, self-reported a substance he was using, which is disallowed by the doping agency USADA. USADA released a new list of prohibited substances at the beginning of the year. Reporting only a few days before the event he was scheduled to fight in, Machida's rematch with American, Dan Henderson, was cancelled. The length of Machida's suspension will be decided at his hearing on the case.

Machida and Shields will face off in a submission only event, Submit Cancer, on August 13 in Denver, Colorado. The match will follow no gi Brazilian jiu-jitsu submission rules. All the event's proceeds will be donated to the Colorado Children's Hospital Fund.

While Machida was going through a rough spot - just 1-3 in his last  four fights - before the doping scandal, he will rely on his Brazilian jiu-jitsu and sumo skills to defeat Shields. Even though he is known for his striking prowess, he was a difficult fighter to take down during his 29 fight career.

Shields has also fought for nearly every major MMA organization and tournament including the UFC, Bodog, Rumble on the Rock, Shooto and Pancrase. The 37 year old native of Tennessee is also the former Strikeforce middleweight champ, UFC welterweight contender and EliteXC welterweight champ, Shields currently fights under the World Series of Fighting Banner where he is 2-1 losing by kimura in his most recent fight for the welterweight belt against Brazilian, Rousimar Palhares.