It is common knowledge - or at least an accepted belief - that playing at home gives one a leg up on the competition. Of course, this is generally held for team sports like baseball, soccer, football, basketball and hockey. Does the same hold true for fighting? 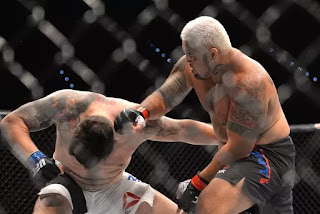 Did fighting in Australia help Mark Hunt knock out Frank Mir?
A few weeks ago I wrote an article about fighters and whether or not they would want to fight in New York given the high tax rate in the state. Will Fighters Want to Fight in New York? I started my argument with a blog post from the author's of Freakonomics new book When to Rob a Bank. Granted, I've been busy, and thus have had little time to read on. In the last few days, I was able to continue my reading and another post had me thinking about its application in mixed martial arts.

The blog post, How Advantageous Is Home-Field Advantage? And Why?, prefaces on the book Scorecasting by Toby Moscowitz and Jon Wertheim. The authors - of Scorecasting that is - researched the win percentages of teams in the major American sports. The compilation and analysis of the data is deep with data on Major League Baseball going back to 1903 and the National Football League to 1966. While Major League Soccer opened business in 1996, the authors used data starting in 2002.

It's fair to say the sample size is large and representative enough to make the point. The percentages of home teams winning per sport are as following:

In the blog post, Steven Levitt and Stephen Dubner - the Freakonomics authors - go on the explore the reasons most fans think home field advantage matters, such as "sleeping in your own bed," and "eating home cooking," better familiarity with the home field or court and crowd support.

Moscowitz and Wertheim dismiss all of these theories from their findings.

So, I put the hypothesis of "home cage" advantage to test in a very unscientific analysis of recent data based on UFC events. A home cage fighter could be someone from the same city, state or country as where the event is being hosted. Given limited time, I decided to only look at the international events that have taken place so far in 2016. In total, this equals six events, one each in England, Australia, Brazil, Canada, Croatia and The Netherlands.

In total, there were 42 fights that took place between fighters of the country where the event was taking place and foreign fighters. Of the 42 fights, 27, or 64.3%, were won by the native fighters.

Now, the most obvious ways in which home cage advantage can help fighters is via judging, if the fight were to go to a decision, or referring, in which the referee is more lenient on native fighters and stricter in stand ups and point deductions.

Again, the sample size is small, but we see that when a fight is close enough it may be that home judges give the nod to the local fighter.

As far as refereeing is concerned, no point reductions were recorded in any of the 42 fights, though, that doesn't mean there should not have been. MMA referees are known to be hesitant in taking point reductions, but if some have there way, instant replay could be in the near future and used as a tool to properly punish or not punish fighters.

Perhaps the most notorious case in in recent memory in which a referee obviously helped out a native fighter is when Vitor Belfort received several quick stand ups in his fight against Anthony "Rumble" Johnson in Brazil. Belfort would go on to win the fight via submission.

According to Moscowitz and Wertheim, it was refereeing that they found to be the factor that helped home teams win. The authors discovered that home teams get slightly preferential treatment from officials, but that this treatment could potentially have a big effect. Levitt and Dubner note that the higher percentage of home teams winning in soccer than in other sports could be due to the strong influence soccer referees have in deciding a match via a penalty kick.

There is a caveat to refereeing that Moscowitz and Wertheim make in that referees are not necessarily corrupt or set out to help the home team, but more affected by their surroundings - more specifically screaming fans. Levitt and Dubner suggest that referees may assimilate with the crowd's emotion and involuntarily "help" the home team. The authors go further in proving this point in demonstrating that when crowds are separated by a racing track there is less home field basis.

So, it appears crowds can have an effect and with MMA cages typically very close to screaming fans perhaps referees are influenced to be overly tight with rules or to turn an eye on an infraction by a native fighter. 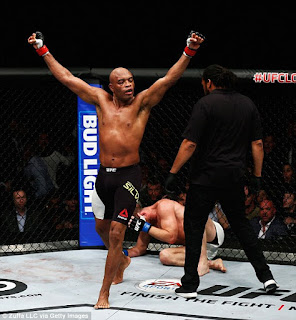 Would Herb Dean have made a different decision in front of Brazilian fans?
Okay, back to our own experiment.

Another possible reason for the apparent home cage advantage, could be that local fighters are matched up with weaker opponents in order to please local crowds. It is this author's opinion that such a thing has occurred at UFC events, especially when the company is breaking into new markets like it did in Brazil in 2011. Of course, any analysis of this data would be inherently bias based on the analyst's definition of "strong" or "weak" competition. Furthermore, it is this author's opinion that the UFC's rankings are used more for promotional purposes than to really define who the best fighters are.

When it came to non-decision results - knockouts and submission, 12 wins went to the native fighter and 9 wins to the foreign fighter for a 57%/43% split. Perhaps the most shocking foreign fighter finish was that of American, Stipe Mioic, who knocked out Brazilian, Fabricio Werdum, for the heavyweight strap in front of 45,000 partisan fans in Curitiba, Brazil.

Is there a difference between male and female fighters? 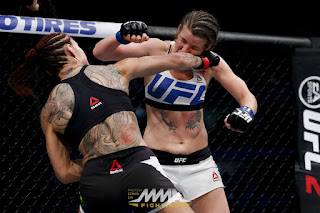 Cyborg finished the job in her Native Brazil.
Among the 42 total fights in the sample, only four involved female fighters. Three of the native female fighters one there fights, but only one by decision. The other two won by TKO/KO and the lone loser lost by TKO.

Another important question is whether or not certain countries are more guilty than others in giving home cage advantage. Of the six countries in this experiment, only Croatia and The Netherlands held their first event in 2016. So, which was the most bias?

Of course, we mentioned the issue of judging being an advantage for native fighters, so when looking at decisions it is important to note that all three Dutch fighters who won their fights won by knockout or submission. When it came to decisions Canadian and Brazilian fighters seemed to benefit the most with the former going 4-1 in decision fights with 1 split decisions and the latter going 3-1 with 2 split decision victory. The English also benefited going 6-2 in decisions with 1 split decision. Judging had a zero sum effect on Croatian fighters who went 1-1. Australians were actually at a disadvantage going 1-2 in decision fights on home turf.

As we have mentioned before, this experiment we did is far from perfect. There are many factors that could affect final results including city, state or country home cage advantages, a difference between female and male fighters, whether or not the results in the first few events in the country compared to latter events when the UFC has established itself in the market, and a comparison between the UFC and other MMA organizations including organizations based outside of the United States. The list goes on.

Considering that these factors are many, we hope to continue this experiment in much more detail in the future, and we would love to hear our readers' opinions. Subscribe or sound off in the comments section of our blog and follow us on Facebook, Google + and Twitter.