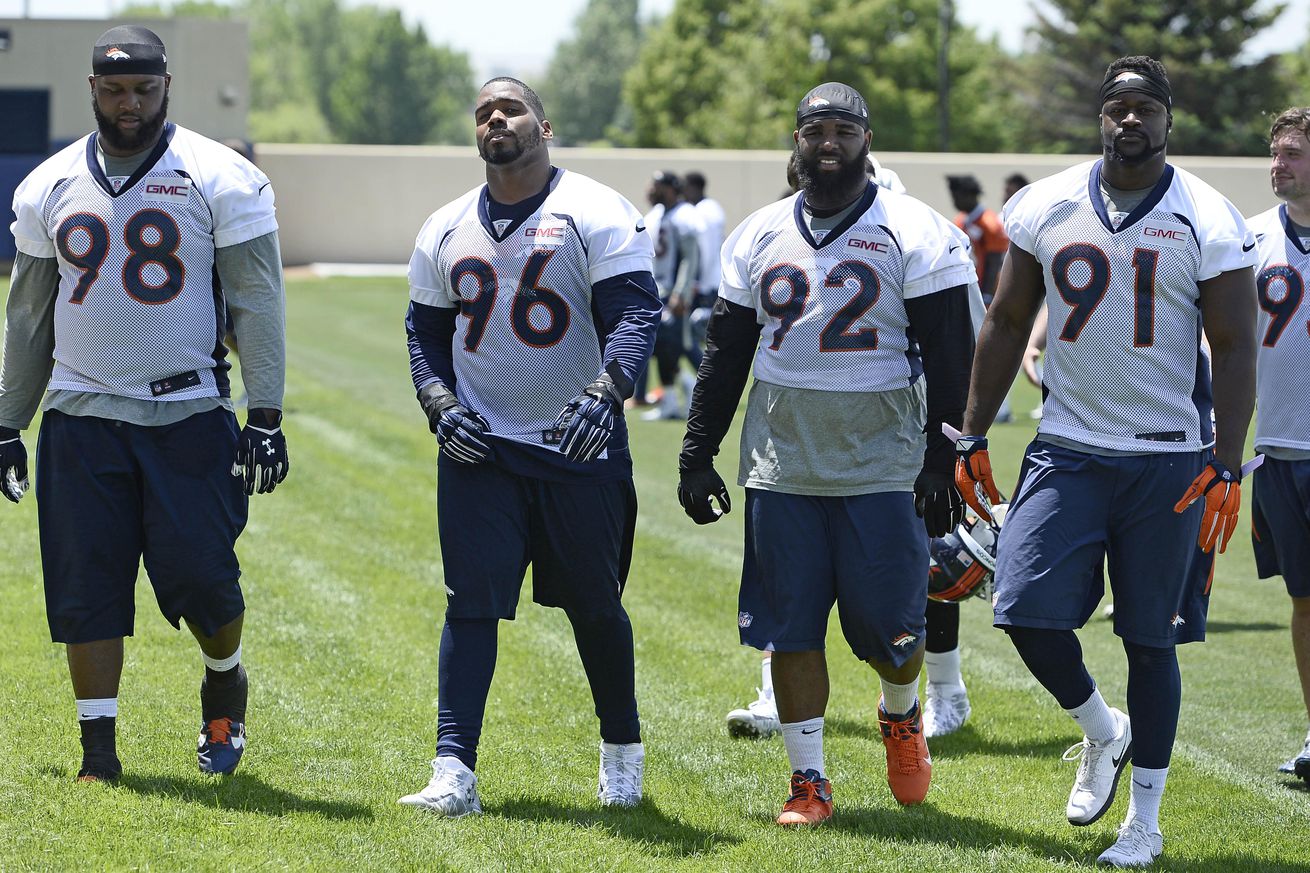 Breaking down the Nose Tackle position, that gets a little murkier after recent news.

I feel like the trenches have been taking a lot of hits so far in training camp on both sides of the ball. As a result, NT is pretty thin right now for Denver with Phil Taylor being waived due to injury and yesterday’s news about Vance Walker.

I actually had some clips of Walker playing NT occasionally last year and doing very well that I was going to show in this breakdown, but obviously will not be anymore.

Before I continue and get even more depressing,

Here is my prognostication on where the nose tackles stand thus far in regard to making the team in 2016.

I did the 90 in 90 breakdown on Sly a few weeks ago and included some clips of his performance last year. He is a bit of an unsung hero on the line and a big reason why our running game was so stout last year. We’ll continue to look to him to plug up the middle.

He put in some good work last year and is still growing after being picked in the 6th round out of Maryland. I like what I have seen so far, and expect him to improve upon his rookie campaign.

Excuse that last tweet. But Darius Kilgo putting Zuttah on skates here to blow up the run play is pretty pic.twitter.com/fU2UgJXAIV

Darius Kilgo continues to pop on tape. Him & Sylvester Williams give Denver two capable nose tackles which is huge. pic.twitter.com/thREN2k4sK

On The Bubble: (listed intentionally in order of chances of making the team)

Peko has a decent chance of making the roster depending on if we bring someone else in to replace Walker. He likely isn’t a good fit as a pure nose tackle, but could offer some pass rush ability.

When asked about Peko, Kubiak said:

“Peko is a good name. He looks like a good player. It is going to be interesting to see how he plays during the preseason. [NT Darius] Kilgo needs to continue to step up as a second year player. They are getting plenty of opportunities. That’s been our nick spot. There and tight end have really been missing some guys and are short on numbers. We’ll see. He’s obviously stood out.”

I also included newcomer Billy Winn here although he is listed as more of a DE, he might be able to play all over the line and see time at NT if he sticks. The others are likely some of the first round of cuts.

Vance Walker’s injury throws a wrench in the D-line a bit so it is kind of up in the air right now. If we end up keeping less DEs, that could mean keeping another “NT” to move around at DE, or playing Sly more out at end while Kilgo got more NT snaps.

The D-line rotation will be something watch closely over the next week and see if the team makes any moves to solidify the group.

In the meantime, here’s to no more injuries!

Sound off in the comments section and give us your predictions on who you believe the Broncos final group guys at Nose Tackle will be!