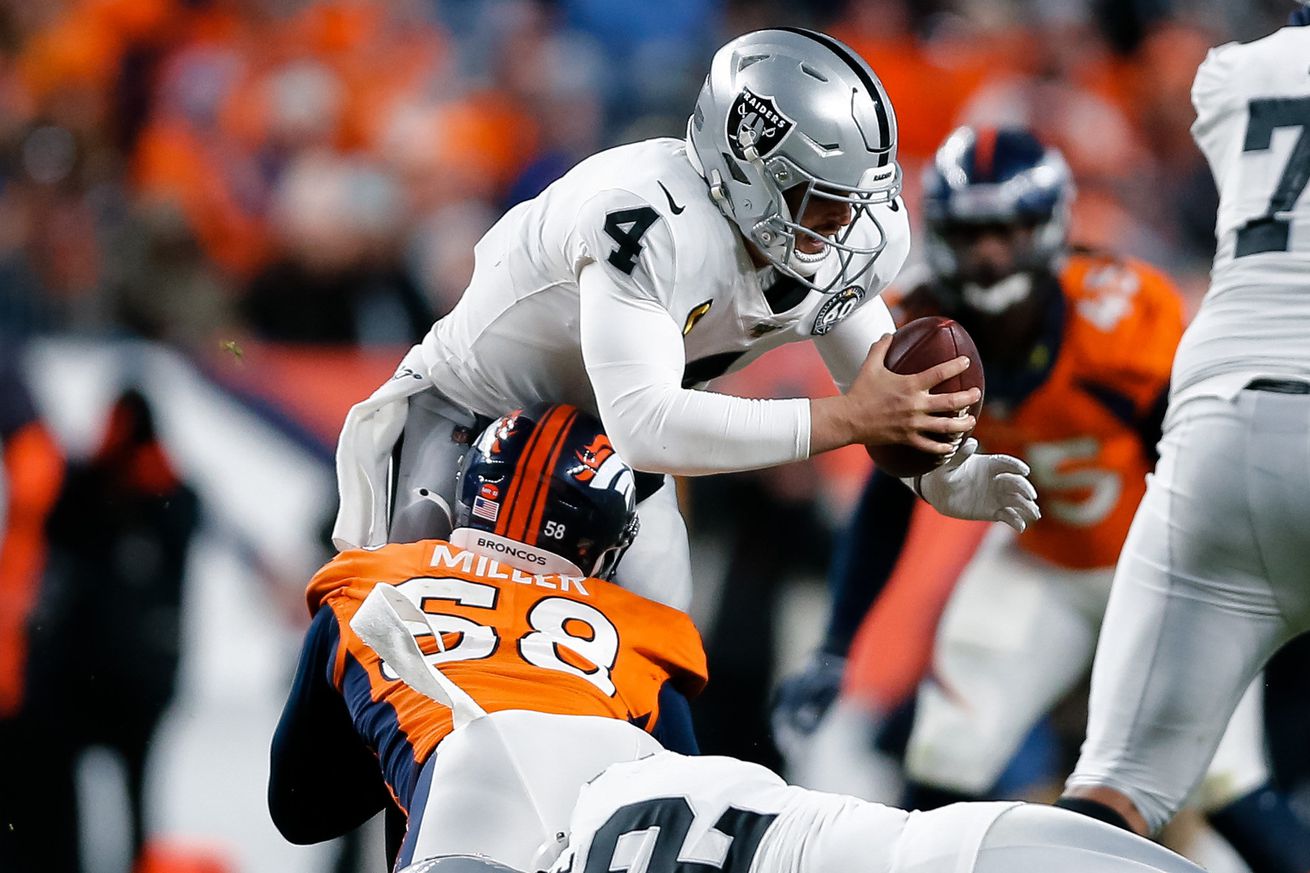 The Broncos finished the season 4-1 after starting it 1-4. It was a hell of a turnaround, and for the first time in years, the team is excited about the future.

When Shelby Harris swatted Derek Carr’s ball into the turf, preventing a two-point conversion and ensuring the Broncos’ one-point victory over their most storied AFC West rival, it was as if the big man just yelled instead, “Not in MY house.”

He was sending a message to his teammates for the future.

And Von Miller heard it loud and clear:

“We’re done with this losing shit.”

That is the mood of this team and this fan base - and 7-9 never felt so good.

The one-point triumph was neither pretty nor dominant. But it was all it needed to be - a “W.”

And Miller couldn’t have been more honest about how the new energy in the offense with Quarterback Drew Lock has affected his outlook. But it’s more than the QB.

“It has a lot to do with everybody,” Miller said, highlighting progress from Noah Fant and Lock in one season plus amazing production from Phillip Lindsay and Courtland Sutton in year two. With Ja’Wuan James, Kareem Jackson and Bradley Chubb back next season, Miller sees huge upswing. “The outlook looks good.”

With one sack, three QB hits, one pass defensed and four tackles, Miller played inspired and showed no signs on the field of wanting to be anywhere else than “with his guys.”

“I know a couple of weeks ago, I was upset and kind of the tone from that, but I’d never lie to you guys, I’m excited about this squad, what we’ve got and what we’re going to be able to do next year,” he said.

Though no coach or player is happy to boast another losing season, this one feels different. It feels...hopeful.

Plenty to build on in 2020. pic.twitter.com/ua7VqHIGVy

For rookie Dalton Risner, the adversity from the early losses and growing pains allowed the team to win Sunday.

“That is why we ended the season why we did, probably because of some of the things that happened early in the season,” the guard said. “Maybe we don’t lose some of those games, maybe we still aren’t the same team, but I think that every bump in the road has made us who we are. Going 7-9 this year fired us up to have a great year next year.”

Justin Simmons called it a statement game. Closing out with a win while preventing Oakland from a chance at the playoffs was a sweet revenge for the loss to the Raiders in Week 1.

“Obviously for us, no playoffs and I don’t know what would have to happen for Oakland—and I don’t know if it did or didn’t happen—but all I know is that if we win, they don’t go,” Simmons said. “Coming in here and making sure we solidified that. ...That was huge for us to kind of stamp that; it was nice to see us close it out the right way.”

“Hats off to our defense for playing the way they did. They kept us in this game and ultimately won this game for us.” - Drew Lock

There was plenty for Broncos Country to dislike about the game - especially the defense in the fourth quarter and the offense most of the game. But there were just enough clutch plays at the right times to keep Denver in the lead.

And quarterback Drew Lock knew exactly who to thank for that - the defense.

A forced fumble and recovery at midfield by Trey Marshall just before the half ultimately led to the Broncos’ only touchdown on the day.

“We scored more points than [the Raiders], so it ended up we made more of the plays - but most of those plays came from our defense today,” Lock said. “Hats off to them for playing the way they did. They kept us in this game and ultimately won this game for us.”

Fangio also wasn’t too keen on the offensive performance overall, but he still liked what he saw from the rookie QB.

“I wasn’t happy with our performance offensively, but again I didn’t see anything out of Drew that told me, ‘Oh geez, maybe he isn’t the guy,’” Fangio said. “I like the way he’s played, and I like the way he’s reacted and played through games that weren’t going well. To me, that’s part of being an NFL quarterback. He has shown that he’s got that part in him.”

You have been everything to this team. I hope you're back but will cheer for you no matter what team you play for. https://t.co/d2ukZSLwaK

Heading into the offseason with a win is one thing.

Heading into the offseason knowing who the starting QB will be - and trusting him - is a whole different ball game.

And it’s a big part of why veterans like Von Miller, Harris, Derek Wolfe and Chris Harris Jr. want to stay in Denver.

Reality says it is highly unlikely that happens, but it’s nice to see veterans wanting to be part of what has been started this season under Fangio, Ed Donatell and Rich Scangarello.

“Oh yeah, definitely,” Harris Jr. said about wanting to remain a Bronco. “We’ve got a quarterback now that I feel confident in that we can get it done.”

Phillip Lindsay, who grinded out a second 1,000-yard season in a row - first time ever in the NFL by an undrafted player - is already making strong promises.

“This year has been a tough year for us, but it showcased the fight in all of us. This last game wasn’t a pretty game, but we got the win and we are going to build off of it for next year,” he said, adding that the last-second losses that happened so frequently this season are going to change. “We gave up a lot of games where we were winning the game and, with 30 seconds left, we lost. Next year, that’s going to change. We are going to go get a few more pieces [players], which will be exciting, and we’re going to build a Super Bowl team.”

Because they are done with this losing shit.