10 winners, 2 losers from the Broncos win over the Raiders 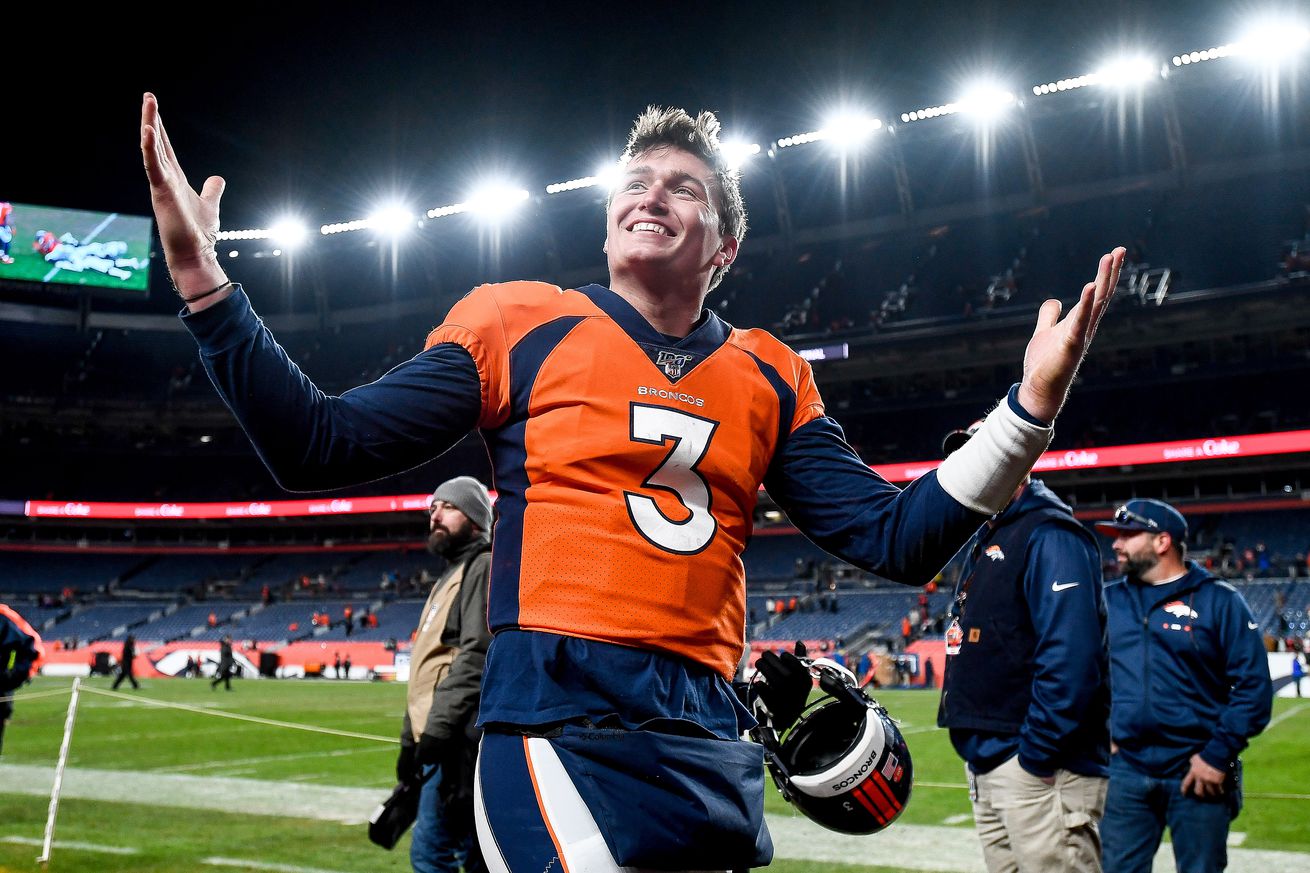 The Broncos close out Drewcember 4-1, send the Raiders to LossVegas as losers and give Broncos Country hope.

How about that finish?

There was a little more excitement at the end than my heart would have liked, but any Denver Broncos win over the trash Oakland Raiders is a great win. In the process of the 16-15 win, the Broncos (7-9) finished Drewcember 4-1 and for the first time in four years, with hope for the future.

Now let the excitement rush over what this team could look like come 2020.

Per the usual, I’m bound to forget someone, so please mention them in the comments.

Pay. The. Man. The Broncos defensive lineman won the game with his second pass defended on the day and his league-leading 10th by a defensive lineman. John Elway and Denver’s front office needs to do whatever it takes to keep Harris in Denver. Harris also added two tackles.

If all you look at is the stats, you don’t get the complete picture. The rookie quarterback again passed the eye test with how he kept plays and drives alive with his legs, made some incredible passes and he didn’t turn the ball over. With the win, Lock ties Elway for the most wins by a rookie quarterback in franchise history — Elway did it in 10 games, while Lock did it in five. Lock finished the day 17-for-28 passing for 177 yards and a touchdown. Also keep in mind the MASH unit Denver threw out at the offensive line.

On a typical day, 53 yards on 18 carries wouldn’t make this list. However, it put Lindsay over the 1,000-yard mark in back-to-back seasons, and he’s the first undrafted player in NFL history to do that. He’s also the first Denver running back to get consecutive 1,000-yard rushing seasons since Clinton Portis (2002-03). Lindsay is also just the fourth Denver running back to get back-to-back 1,000-yard rushing seasons.

The second-year receiver played one helluva game on Sunday, after playing a great game against the Detroit Lions. At the very least, Hamilton has put himself in contention to compete for the No. 2 receiver spot in 2020. It’s clear to me he has great chemistry with Lock, and that could get even better in the offseason. Hamilton finished with five receptions for 65 yards.

The rookie fullback/tight end had only two catches, but one was a touchdown on a great play design and execution. Beck became the seventh first- or second-year player to score a touchdown for the Broncos in 2019.

You know a player has incredible value when they leave an impact on a game and they didn’t do much stats wise. That was the case for Sutton on Sunday. He had only four catches for 52 yards, but he recovered a key fumble that gave Denver a first down and drew two pass interference penalties. Sutton finished the season with over 1,000 yards receiving and is just the third receiver in Broncos history to reach that mark in his second season (he joins Lionel Taylor and Brandon Marshall).

I love how Denver ended the first half — offensively and defensively. Beck’s touchdown was made possible by the head’s up play by Marshall to strip the football from Marcell Ateman and recover it with 1 minute, 11 seconds remaining in the half. Marshall added seven tackles (six solo).

Miller put up a Miller-esque game to close the regular season, and should leave Broncos Country champing at the bit for what could come in 2020. Miller had four tackles (three solo), one sack, one tackle for loss, one pass defended and three quarterback hits. With his sack, Miller passed former Broncos pass rusher Elvis Dumervil for 26th in NFL history with 106 career sacks.

Let the records continue. Denver’s middle linebacker led Denver with 15 tackles (eight solo) and two tackles for loss. For the season, Davis finished with 136 tackles — the most since D.J. Williams got 141 in 2007 and the sixth most in franchise history.

To finish 7-5 in the last 12 games, and 4-1 in Drewcember, is a remarkable feat. The win on Sunday also gives Denver a 5-3 mark at home, the 33rd time in Broncos’ history they finished with a winning record at home.

Denver’s left tackle has to recognize the moment and not take such a stupid penalty. Give Brandon McManus that extra 15 yards, and that’s a much more make-able field goal. Know the situation and be smarter. Thankfully, Harris bailed Bolles out.

Oakland wouldn’t have made the AFC playoffs even if it had won the game, but it’s that much sweeter the Broncos ensured it wouldn’t have happened had the other scenarios played out. There’s the added bonus that the Raiders lost their final game with the moniker “Oakland,” and Sunday’s game sends them to LossVegas as losers.

10 winners, 2 losers from the Broncos win over the Raiders