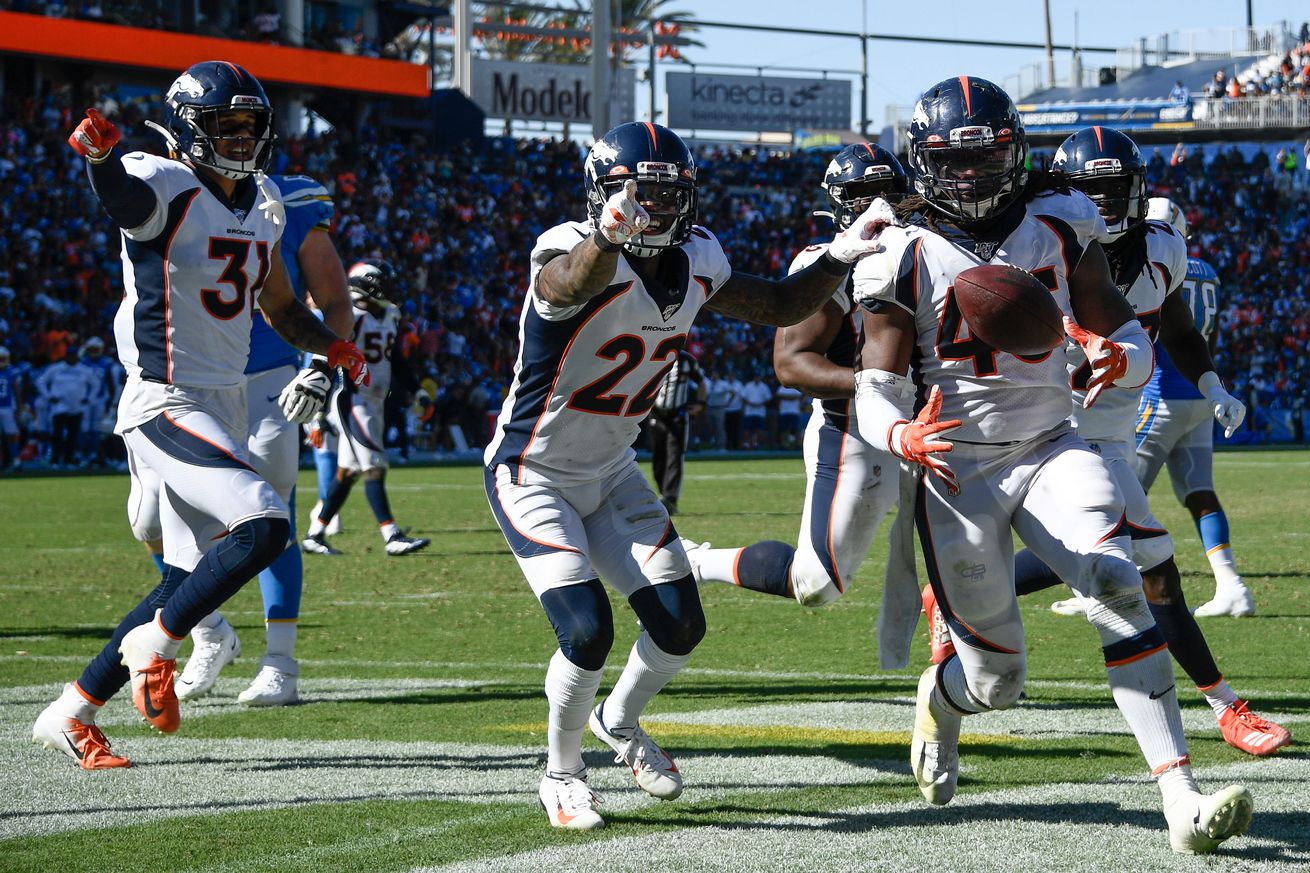 Simmons met the media today and discussed his role and fit in Vic Fangio’s Defense.

Broncos safety, Justin Simmons has been shining in Vic Fangio’s defense so far this year. We kept hearing from him and other throughout the offseason program during installs how much they liked Fangio’s defense, how it sets the players up for success, and also how much communication and trust it requires between all eleven guys on the field.

I wrote about this in the offseason when I broke down what Fangio’s defense would look like, and talked about how it requires all the players working in sync together to make this machine really hum.

During OTAs, here is what Simmons had to say about the defense upon first seeing it.

“Because it’s really secondary driven. I think the biggest part about the defense is that it is all communication based. I think a lot of defenses are like that, but the vibe of this one is different. It’s about trusting guys and seeing plays develop. Guys not mentally being on the same page, but physically. Like reading it how each other’s bodies would read it, as weird as that sounds. It’s just being in each other’s shoes and feeling out the plays. It’s a great concept and I’ve loved every second of getting to dive into it. We haven’t even scratched the surface yet in OTAs. I’m excited to keep learning.”

So far, it looks like things are playing out as Simmons described then, and he still feels the same way about Vic’s defense.

Today, Justin met the media and was asked about how he would assess his play, as well as his fit so far in Fangio’s defense.

Here was his answer:

“I think I played well, not pulling the humble card or anything like that. I’ve done a lot of things well. There are a lot of things that I think that I’ve missed and could definitely make plays on just looking at the midseason film and moving forward like what are things I need to work on to help our football team be better. There are a couple things here and there. A couple of communication things that [DB] Kareem [Jackson] and I talk about all the time fixing and getting right for the second half of the season. Overall, pretty good but definitely a lot of room for improvement.”

The communication between he and Jackson is so important due to the responsibility Vic Fangio and Ed Donatell put on the duo.

“I think the biggest thing is [Head Coach] Vic’s [Fangio] defense is so elaborate. There are so many different levels to it so you put in one defense, but in that one defense are so many different calls that you can use that are in your tool box. One of the things from a safety standpoint is setting up your defense in to the right calls to where you’re going to be the most successful.

Kareem and I have kind of have the freedom to do that. Throughout the week we’ll do different calls to see what we like better or ask guys—our corners, nickels, backers—what they like better. I think that puts us all in great position because it constantly forces us to communicate, constantly forces us to be in each other’s shoes, in each other’s minds, thinking and playing everything the same, and seeing everything the same. That ultimately helps us in the back end because we’re last line of defense see everything happening and confusing the quarterback and things like that.”

This is a pretty cool insight into not only how the defense operates, but also the trust Fangio puts in the two safeties. This is why cerebral players like Simmons and Jackson have been such good fits in this secondary, as they play quarterback for the entire coverage unit.

Also, if this isn’t a case for resigning Justin Simmons to maintain continuity and keep this thing going, I’m not sure what is.

Steve Atwater joined the guys on Broncos Country Tonight on KOA Radio tonight to talk about Simmons comments as well, and how impressed they have been with the young safety (which is always high praise coming from a Broncos great like Atwater).

Check it out starting around the 11:45 mark below.

Atwater contrasted Simmons comments to how things were on the defenses that he played in back when he was patrolling the back end, and said that what Simmons was talking about he and Jackson doing are “taking it to a whole other level” in terms of the responsibility they’re given.

It’s fun to hear a Hall of Fame level legend of a safety like Atwater talk about Simmons and Jackson and what they’re doing here in Denver. Those two guys have been key pieces of this top ranked Broncos defense and hopefully Broncos Country can continue to watch them run this defense for the next several years.