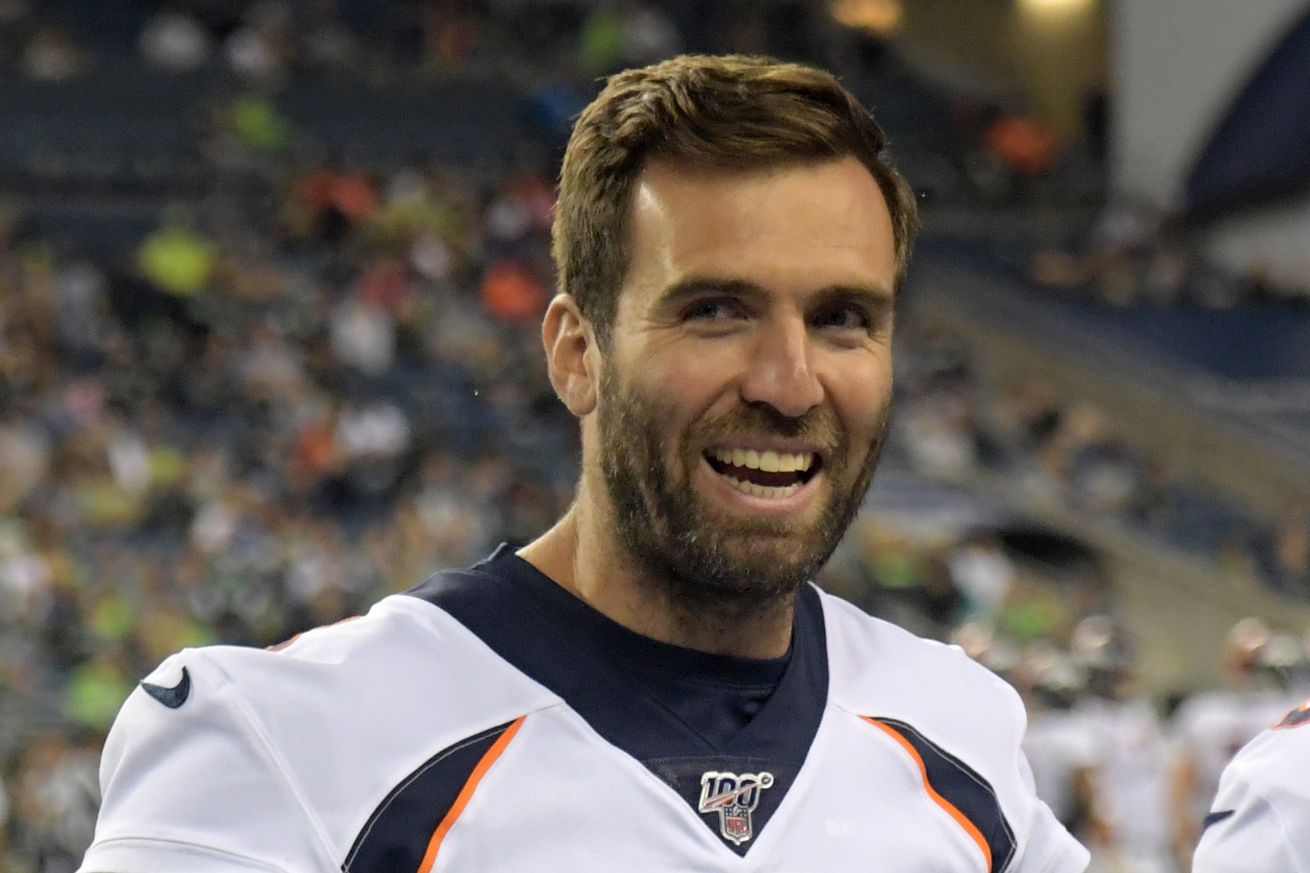 So it begins. Here is how the NFL landscape looks heading into Week 1 of the 2019 regular season.

The biggest goal of every NFL team each preseason is to make it out of the summer relatively unscathed for when the games count. Some succeed, some hit week 1 looking like a husk of the team that opened training camp.

Beyond injuries, the preseason also serves as a noteworthy time to see how newcomers and younger players will carve out roles on their respective teams. So while this initial Power Ranking will look pretty similar to my Preseason Power Ranking novel, some changes occurred.

With the regular season finally arriving, this will also serve as my official prediction for the 2019 season. The numbers reflects where I have each team in the overall league hierarchy, but I’m placing them by their standing in the division race. Make sense? Good.

This is going to be a fun division, as every team has the pieces to make a run if things roll their way. Detroit can jump to the top of the heap if A) Hockenson provides an instant impact as a 50-500-5 type of receiver with his blocking, B) Kerryon Johnson can stay healthy and maintain his rookie efficiency as a war horse, and C) Kenny Golladay grows into Baby-tron.

Chicago looks to have a fatal flaw at quarterback and will slide a bit on defense, but will contend for a title if I’m wrong on either. The Vikings need a little health luck because their roster isn’t as deep as some other contenders, but their starting 22 looks better than most.

Matt LaFleuer was one of my three favorite coaching candidates last year, and his system should breath new life into Aaron Rodgers’ career. Jaire Alexander is going to be a household name at this time next year and Mike Pettine’s defense is going to be nasty with their free agent additions.

The Bucs and Panthers are a rung below the top two and need a few things to make it into the dance. Both have the skill position pieces on offense, but need to find or manufacture a pass rush to hide their shaky secondaries. Of the two, I like Todd Bowles’ history as a DC enough to keep them in the “musical chair” tier. It doesn’t help Carolina that they have Cam Newton’s perpetual health questions to wrestle with.

Panthers in late-April: Let's spend the No. 100 overall pick to improve our backup QB spot

No joke (or maybe it is): all signs point to Washington starting Case Keenum in week 1. Meanwhile, Dave Gettleman’s Giants have spent the last month with their tongues out because Daniel Jones can do the same thing Kyle Sloter did. Forgive me if I’m not booking him for Canton just yet.

The Cowboys are going to get their typical national hype, but all signs indicate they’re due for a bit of regression to the mean. Dallas finished last year 8-2 in 1-touchdown games, which suggests something as small as fumble luck will tip the balance the other way. Dallas also finished 2018 as one of the most healthy defenses in football. Starters lost just 36 games to injury, per Football Outsiders. Take a look at that depth chart and tell me how they’ll look if DeMarcus Lawrence misses time.

On the other end of the health luck spectrum are the Iggles. Did you know their defensive starters lost more games to injury last year than everyone but Tampa Bay? That will rebound, and the roster’s so stacked they could survive a ding here and there. So long as Carson Wentz stays upright, they’re going to be in the thick of it to the end.

What’s the upside of starting Eli over Daniel Jones? Curious to hear from you guys

The Cardinals roster is probably a year away from being a year away, at best. With Patrick Peterson suspended, they’re counting on Tramaine Brock to give them starter minutes. Kyler Murray should make them an exciting bad team, but it’s still a tire fire in the desert.

Sean McVay has gotten a lot of heat this preseason for sitting everybody, but maybe he’s onto something. In 2018, the Rams finished with the 4th healthiest roster in the NFL, according to Football Outsiders Adjusted Games Lost. This, after the league best ranking in 2017. If L.A. doesn’t regress this year, I’d be shocked. Maybe a dynamite medical staff and preventative maintenance on starters to begin the year is the trick.

I think they'll suffer with basic fits and techniques because Vance Joseph is the DC. https://t.co/fnukfquUEX

I had the Bungles as 32 before injuries started wiping out their decent players, so we won’t linger on them.

The Steelers defense is going to be nasty this year, and if Denver struggles in basically any way, expect the dramatic “Devin Bush could have...” guys to come out in full force. Baltimore will pass Pittsburgh if Lamar Jackson makes real strides as a passer and stays pn his feet. If Harbaugh really does expect to run him like they did last year, it’s tough to count on the latter.

It almost feels like the national media’s gone full circle on Cleveland since the Odell Beckham Jr. trade. Everyone hopped on the bandwagon, Baker Mayfield got the Mina Kimes interview, and now it’s, “well, actually...”

Yes, the offensive line is a big question mark. Yes, the secondary needs to come together. Yes, they were ridiculously healthy last year. And yes, they aren’t playing in one of the two cupcake AFC divisions.

Maybe I’m crazy, but while I believe Andrew Luck’s retirement dashes Indy’s best shot at a title since Peyton Manning was wearing the horseshoe, it doesn’t kill their playoff odds.

While the Texans set their future ablaze over the last month, trading for Laremy Tunsil and Duke Johnson does make them the clearest competitors in 2019. Bill O’Brien’s seat is one of the hottest in football. He knows it’s time to put up or shut up, and Houston’s future will pay for it.

Tennessee could steal the division, but I just can’t buy them with a complete unknown at OC, the questions surrounding Marcus Mariota, and the whole “run-to-win” mantra Vrabel has espoused all off-season.

Jacksonville’s a bad joke until they find a real coach, a real starting quarterback, and provide him with a real supporting cast.

If Frank Reich can coach a Nick Foles offense over the New England Patriots, he can keep the Colts afloat with Jacoby Brissett.

Ryan Fitzpatrick’s career as a starting quarterback is sort of like Imagine Dragons: he had that one decent song and has hung around way too long because of it. Every once in awhile a song comes out and it gets onto the radio, but after you hear it twice you realize how garbage it is. The music industry would be wise to go with the upside a younger, unproven band provides, but they just can’t help them$elve$.

Buffalo could be interesting if Josh Allen defies all logic and starts to look like a reliable NFL passer. The Jets could feasibly contend for the playoffs if Darnold makes a jump and Gregg Williams works some bounty-gate level magic on the defense.

I wouldn’t count on either, so even if Father Time catches up to Tom Brady this year, they have to be considered the heavy favorites for the AFC East. Again.

Splits are the Darndest Things:

Can...can Josh Allen not throw to his right?

Four things that are simultaneously true about the AFC West:

Los Angeles had one of the toughest preseasons for any team this side of Ohio. Kansas City carries four corners and just resigned LeSean McCoy, so they clearly hope to score their way to the Lombardi once more. The Raiders are counting on Tom Cable’s offensive line to give Derek Carr enough time to find Antonio Brown.

Which leaves us with the Broncos.

Denver has the look of a mid-tier team unless Joe Flacco and the Broncos’ young receivers shock the league. Emmanuel Sanders and Ronald Leary’s health questions make them tough to bet on. Vic Fangio, Von Miller, Bradley Chubb, and the New Fly Zone makes them tough to count out.

Anyone who’s paid attention over the preseason will tell you how the defense should be better than last year’s unit, even with the questions at linebacker. If the offense can get to average in year one under Rich Scangarello, the Broncos can hang with anybody.

15 of the last 16 @NFL seasons a team that finished last in its division the previous year has gone worst-to-first.