Horse Tracks: Where is the 2019 Draft Class Weak? Where is it Strong? 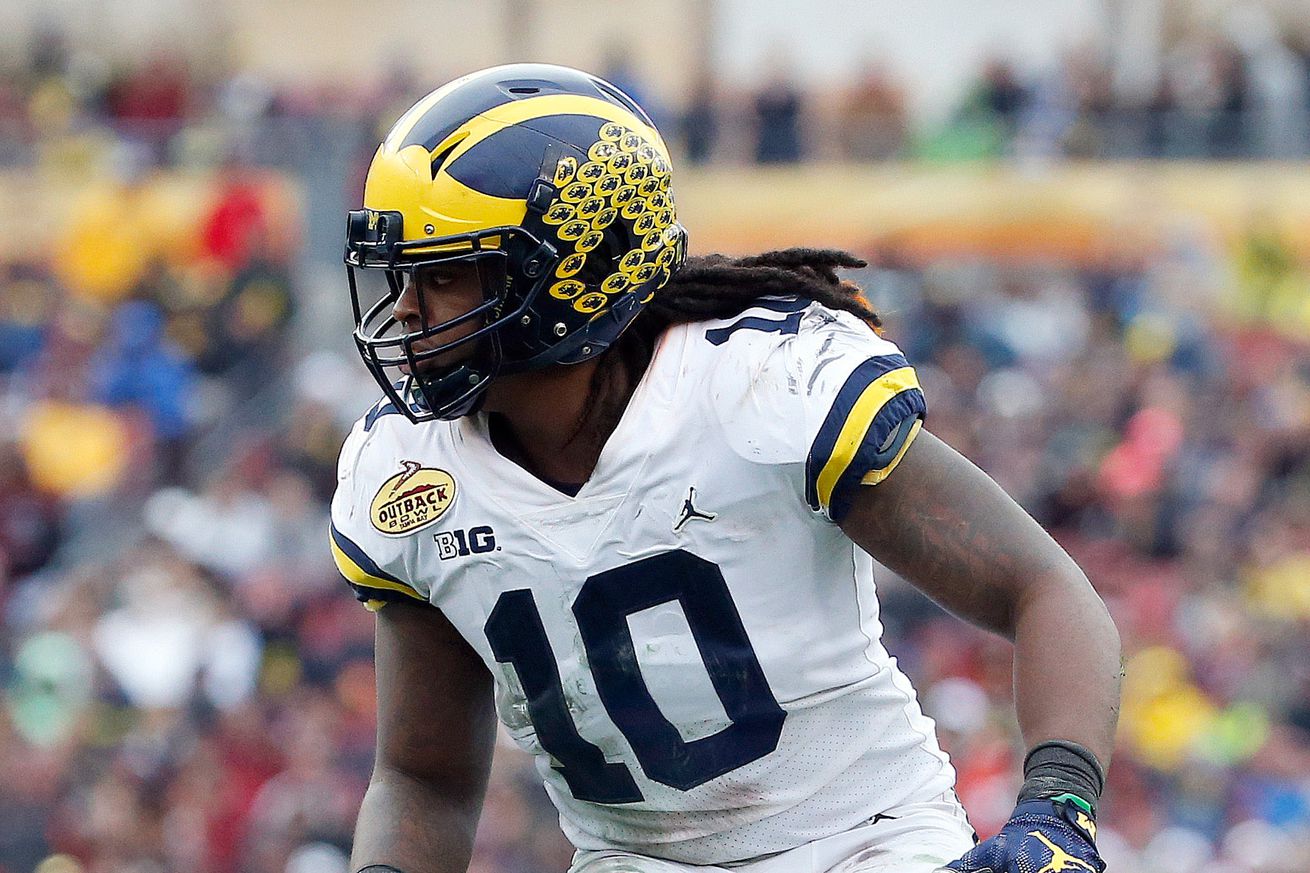 Breaking down the 2019 NFL Draft Class in terms of strength and weakness at each position. Where could the Denver Broncos find value?

We’re kind of reaching the home stretch gang. Hard to believe that it’s only been 84 years 4 months since Denver lost their last game of the season to the Chargers, right?

As I studied tape since, I found it hard not to notice where this draft seems to offer little in the way of Denver’s needs. Routinely it would show up in the many mock drafts I played with. One of the hardest parts that comes with mock drafting is riding the board to make sure you don’t miss out on addressing a position of need.

No class is created equal. Sometimes there aren’t enough linebackers, sometimes there’s an overabundance of wide receivers. In situations such as that it makes more sense to grab a linebacker high and take advantage of the depth at receiver. Sounds easy ‘til you’re deciding to pass on N’Keal Harry because of Devin Bush is staring you in the face.

10 Things I think I think about this class.

3. The linebacker class isn’t going to wow you, which is one reason the Devin’s look like they’ll both go in the top 20. Mack Wilson and Blake Cashman could be decent starters this year in the right scheme. After that it gets dicey. Bobby Okereke and Germaine Pratt both show really good things, but also have noticeable issues that they’ll probably need time to iron out. I like Ben Burr-Kirven as a sleeper, and think he could contribute in the nickel day 1. But most of the rest of these guys are developmental scheme fits, low ceiling stop gaps, or special teamers.

4. I’m not sure if this edge class is as deep for Denver’s needs as you’d think. There’s a few guys who really intrigue like Maxx Crosby and D’Andre Walker. After that there’s some pass rush guys who can’t play in space, or jack of all trades that won’t really offer as much pass rush oomph as you’d hope for in the Fangio 3-4.

5. This receiver class is an “eye of the beholder” group. No one can agree on a #1, or #2, or #3, etc. There’s a decent chance Elway can get his top guy at 41 if he so chooses. Don’t be surprised if the Broncos take a receiver higher than the perceived need. Emmanuel Sanders is playing out his last year in Denver and it seems the coaching staff sees DaeSean Hamilton as a slot guy. There is a need for a long term Z.

Here's how I'd order my 10 favorite WRs among prospects I've watched. How you prioritize them depends on role you need but for me:

6. The Defensive tackle class is completely insane at the top. Quinnen Williams, Ed Oliver, Jeffrey Simmons and Jerry Tillery are all true “planet theory” guys. All of them would be DT1 in most classes. Even farther down the board you got Zach Allen, Dre’Mont Jones, and Renell Wren who could provide huge impact in time. Then there’s the Nose Tackles. If the Broncos want to grab a true nose they’ll have ample opportunities.

7. There’s a couple developmental tackles that should really intrigue Munch. Tytus Howard is getting all of the pub on Draft Twitter, but Yosuah Nijman and Trey Pipkins both look like they could turn into stalwart edge protectors with some time and love.

8. This corner class isn’t bad for what Denver needs, but if Fangio wants a Day 1 contributor or decent Year 2 starter Elway will need to strike early. Beyond the big names is mostly high upside gambles or low upside stopgaps.

9. This safety class is sneaky good, especially for the Broncos new D. After Chauncey Gardner-Johnson, any one of the Savage, Thornhill, Hooker trio could turn into stars in the new system.

10. Tight end is deep, but wait too long and it’ll get stuck behind Butt.

I don’t agree with everything The Draft Network’s Kyle Crabbs says, but his Horizontal Board does a beautiful job of giving you an idea of the opportunity cost Elway will face Thursday night.

My 2019 #NFLDraft board has been working out. We've taken our final form -- the number of prospects included has grown to 340. https://t.co/YXzRvKo8IW pic.twitter.com/3f2Z7FuiEw

Will John Elway select his quarterback of the future in the 2019 NFL Draft? - Mile High Report

Is this the draft he swings again?

I didn’t say it was the smart move. But..the feeling around the league is Denver and Miami won’t take a QB and Washington would be eliminated if they grab Rosen. Calculated risk.

One reason why the bar is insanely low for what constitutes a franchise QB? Even average ones are wins for the cap ledger.

Could Haskins be the quarterback that John Elway selects at 10th overall?

Who would be the best QB for the #Broncos?

Hock makes a ton of sense

1st and 10 took Von Miller’s statements on Dwayne Haskins, and tried to guess at his meaning.

Report: Growing sense is that the Broncos would like to trade back from 10th overall - Mile High Report

This would be interesting.

DENVER BRONCOS Needs: ILB, TE, C What I know: Their connection to Drew Lock stretches all the way back to the Senior Bowl. And I’m going to say…they punt on the QBs this year. Michigan LB Devin Bush has gotten hot of late with coaches involved in the process. And word is that new Broncos coach Vic Fangio, fresh off coaching Chicago’s defense, may see a little Roquan Smith in Bush. With the 10th pick: Devin Bush, LB, Michigan

FMIA Mock Draft: Four Trades, Four QBs and the 2019 No. 1 Pick Will Be… – ProFootballTalk

10. Denver: Devin Bush, LB, Michigan There’s not a perfect player on the board for Vic Fangio’s defense, but so many teams need a rangy sideline-to-sideline linebacker (Pittsburgh would love for him to drop to 20, but I don’t see it), and many think Bush would be a great compliment to edge-rushers Von Miller and Bradley Chubb. Four or five teams between 10 and 20 would have serious interest in Bush if he falls past 10.

31. Denver: Drew Lock, QB, Missouri PROJECTED TRADE: Denver sends the 41st pick and a 2020 second-rounder to the Los Angeles Rams for this choice. Feel bad about predicting this. Sometimes in mock drafts, you want to get a player in the first round because you think he’s going to be a first-round pick, and you wedge him in and make the logic fit after that. I do not think the Rams want to pick at 31, and feel they can use a trade-down to get a two or three back after dealing fourth and second-round picks to Kansas City in 2018 for cornerback Marcus Peters. Denver likes Lock, and might be able to snag him as a two-year learner behind Joe Flacco while retaining the ability to use the 71st pick this year on a potential starter at a need position, like Texas A&M tight end Jace Sternberger. A move like this wouldn’t surprise me, but I also think the way Denver GM John Elway’s talking, he could punt on a young quarterback until the richer QB draft of 2020.

With both King and Breer throwing Bush to the #Broncos I have serious doubts he'll be the pick.

The most impactful draft-day trade for all 32 NFL teams

The trade: During the 2009 draft, the Broncos shipped their 2010 first-round pick to the Seattle Seahawks to move up in the second round to select cornerback Alphonso Smith.

If the Broncos do hold at No. 10 in the NFL Draft, their pick should come from this list | 9news.com

Does your team need a strong-armed quarterback? Or a big-play receiver? How about a road-grading run blocker? To help get you into the spirit of draft season, here’s a draft primer of the top prospects available on offense.

A reminder when you're reading anonymous scouting reports on a player's character pic.twitter.com/0gn8emuwpE

2) Derek Carr could get another enticing toy.

4) The board could play out perfectly for a first-round CB.

Kyle Trimble from Banged Up Bills evaluates Montez Sweat’s newly-released medical condition, an enlarged heart, and what it means for his draft stock as we approach the 2019 NFL Draft.

The Jets are surely smart enough to realize these dynamics, and to understand that a pre-on-the-clock trade was always going to be unlikely. If nothing else, anyone and everyone inclined to move up to get Murray or Bosa or Williams or a different player now knows that there’s a window to do so, and the Jets surely have had or will have had those conversations about what the price will be long before the 10 minutes of sand begin to slide out of the top of the hourglass.

Will Giants pass on a QB at 6 and take one at 17? – ProFootballTalk

As the draft approaches, there’s been quite a bit of chatter that the Giants will take their quarterback of the future in the first round -- but not with their own pick, No. 6 overall.

Trading down for your franchise QB is a new concept. Gettleman has also famously never traded down https://t.co/I3nxcy9bvp pic.twitter.com/rC2H41mAxG

We noted last weekend that there’s been talk around the NFL of the Seahawks trading defensive end Frank Clark. That talk seems to be getting louder as the draft approaches. Multiple reports in recent days have said a Clark trade is possible.

There was a report that the chances of a trade involving Seahawks defensive end Frank Clark had died down a week ago, but it flared back up again a short time later and appears to still be very much alive.

Peter King has Seattle trading Frank Clark to Kansas City for picks 29 and 63. I would take that deal in a heartbeat. pic.twitter.com/tYE6Klb9Si

“I don’t think I’m ever surprised at how high the quarterbacks go,” Taylor said. “There could be a lot of teams that often times don’t have a lot of first-round grades on guys that are going in the first round, and that’s just the nature of the business. It’s a critical position, so that doesn’t ever surprise me.”

Drafting Patrick Mahomes - How the Chiefs outmaneuvered the NFL

Acquiring Mahomes might have shifted the balance of power in the AFC for years to come. Here’s how the Chiefs traded up to get him two years ago.

NFL draft: Ranking every quarterback class of this millennium - NFL.com

Marc Sessler ranks all 19 quarterback draft classes of the millennium. Where does the impressive, Baker Mayfield-led group from 2018 check in? Which class owns the No. 1 spot?

It’s NFL Draft week and the Arizona Cardinals are on the clock come Thursday night. NFL Network Insider Ian Rapoport reports that Cardinals brass will have a final meeting this week to discuss their options.

Tried, hard, but this class underwhelmed in every way. https://t.co/PSbzR2LtSu

With 12 picks, including two in the first round, the Giants are in position to land a defensive playmaker and their future starting QB on Thursday.

The Ohio State quarterback bleeds Big Blue. “I do see him one day playing for the Giants,” his dad says. Here’s why New York shouldn’t pass on him.

Entering a contract year, the pressure is on the defensive end to produce. And the questions will only intensify if New York selects a D-line prospect.

Went in watching MSU CB Justin Layne, but got my first exposure to Utah State QB Jordan Love and, yeah, I get it pic.twitter.com/Yc7o2TVMni

Horse Tracks: Where is the 2019 Draft Class Weak? Where is it Strong?