Broncos Country thanks you, Demaryius 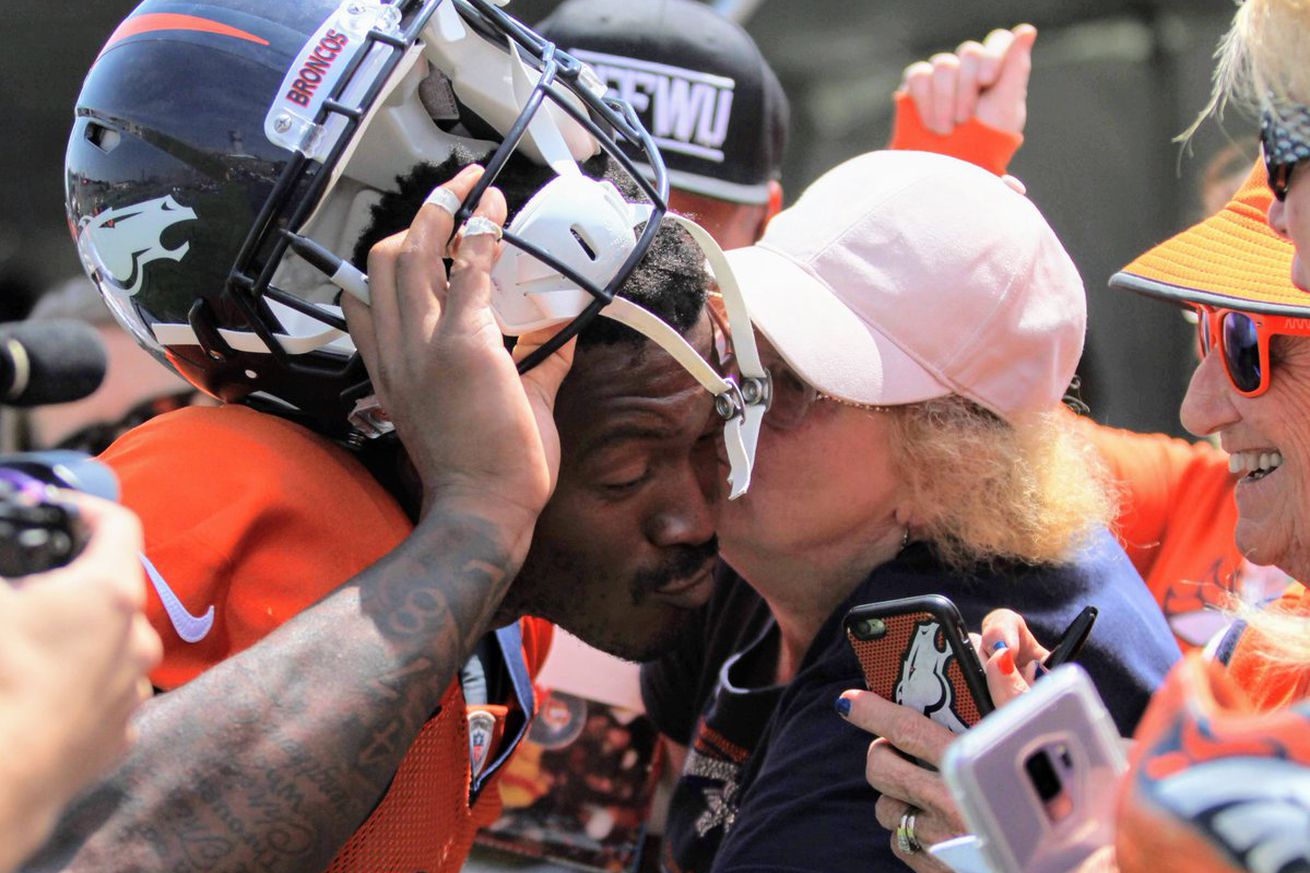 After an incredible nine and a half year run, the Denver Broncos have traded Demaryius Thomas to the Houston Texans. Today, we say goodbye to an all-time Broncos great.

Demaryius Thomas was first player drafted by Josh McDaniels and the Denver Broncos in the 2009 NFL Draft. He took a year or so to get going, but first with Tim Tebow and then Peyton Manning, Thomas exploded onto the NFL scene and remained there.

He finishes his career in Denver with 665 receptions for 9,055 yards and 60 touchdowns. All marks among the all-time leaders in Broncos history. He went to the Pro Bowl four times in nine seasons.

Today, the Broncos traded Thomas to the Houston Texans for a fourth-round pick. As fans, we are taking this moment to share our most favorite Demaryius Thomas moments as a Bronco and thank him for an incredible nine-year career here.

We wish you the best, Demaryius!

The moment I realized we had a special player in Demaryius Thomas was during the Tim Tebow run in 2011 when they got into a shootout with the Minnesota Vikings. Tebow, flushed out of the pocket doing crazy things, found Thomas open on a freelanced route. What happens next, is Thomas completely embarrassing one defender before powering his way into the end zone for the score. Thomas went on to make plenty more big time plays and is a surefire lock for the Broncos Ring of Fame when he finally does retire. - Tim Lynch

Making history with the G.O.A.T.

My favorite moment from DT is all the amazing moments he gave us as fans, and the special connection he shared with Peyton Manning during their time together in Denver.

When Peyton Manning retired, he said this in his farewell speech. "I’ll miss Demaryius Thomas telling me that he loved me and thanking me for coming to Denver after every touchdown I threw to him."

Well from the fans, we love you @DemaryiusT, and thank you for coming to Denver. pic.twitter.com/bS0jfqK4Ed

Well from the fans, we love you DT, and thank you for coming to Denver. - Jeff Essary

I never wanted to trade Demaryius Thomas - not even for a second, despite any of the good “business reasons” we should do so.

In case anyone is confused by my position...

I fucking hate that the #Broncos traded @DemaryiusT.

I am nostalgic for the days when teams had loyalty on both ends of that “business” equation, and I think DT gave the Broncos his best and deserved the right to start and finish his career a Denver Bronco.

I don’t want to hear about his “drops.” He had five consecutive seasons of 90+ catches and 1,000 yards. He was one of the few Broncos to keep fighting through the debacle that was SB48. He has 60 received TDs, second in team history. His 36 100-yard games are the best in Broncos history. Getting to 600 catches in 112 games is the fastest in team history. So don’t tell me this guy didn’t produce.

And I don’t want to hear that he gave up on this team. While he did benefit from future Hall-of-Fame quarterback Peyton Manning, he also put up with Tim Tebow, Trevor Siemian, Paxton Lynch and Case Keenum without ever complaining. He spent a lot of time this offseason mentoring the guy who will replace him - Courtland Sutton.

I loved DT’s quiet demeanor, his positive talk no matter the circumstances, his loyalty to the franchise, Mr. B and his teammates.

For me it’s not a single moment so much as it’s the player DT chose to be throughout his career in orange & blue. 114 consecutive games started, playoffs included. He was always out there forcing the other team to adjust how they played defense just to deal with him, no matter how tired or banged up he was.

I once saw Demaryius Thomas catch two touchdown passes in a game on Sunday despite barely being able to walk the previous Wednesday. He’s an incredible person and has been all the #Broncos could have asked for and more. He followed the Champ Bailey creed of letting his play talk.

When the team fell apart vs the Seahawks in the Super Bowl, DT was the guy out there trying his hardest no matter what. He owns the most productive season ever played by a Denver Broncos receiver, plus two others in the top 5. And throughout all that he was a dependable, solid player and an excellent teammate. No matter the circumstances. Go back to 2018 training camp and you’ll find examples of him coaching up Sutton & Hamilton, doing everything he could to help two young guys succeed even though he fully realized that they were there to do what they did today: to take his job from him.

There are plenty of people out there with a bad word to say about DT, but I’m not one of them. He wasn’t, and isn’t, a flawless player, but he was and is an incredible teammate and a quiet, steady leader. The Texans are getting a good one. And with Houston poised to likely win the AFC South this season, I can’t help but be happy for DT on one level, as he’ll get at least one last shot at a bit more NFL postseason glory before he hopefully signs the one-day contract that will put him back in orange & blue for good. - Taylor Kothe

All of the above

There are so many people in Broncos Country that seemed to turn on Demaryius Thomas with the departure of Peyton Manning. I don’t know that I get it. He has always been one of the leaders on this team. He battled through injuries for much of his time in Denver, and made huge played. He was approaching many of the numbers put up by Rod Smith, and headed toward a spot in the Ring of Fame. I don’t have any one moment that I want to write about. I’d rather just be thankful for the time and effort he gave to the Denver Broncos, the community, and Broncos Country. I wish him well in the future, and I know he always has a place in Broncos Country. - Adam Malnati

Being a Pat Bowlen Bronco

We remember the 80-yard touchdown catch that sent Broncos Country into delirium. We remember the effort he put forth in Super Bowl XLVIII when he recorded 13 catches for 118 yards and a touchdown. DT is one of the greatest Broncos in history, and he’s one of, if not the most, under appreciated and undervalued players in team history. We know the stats (see Laurie’s post above for a refresher). But what I will always appreciate, remember and value the most is that DT is a Pat Bowlen Bronco. What is that? A player who shows up everyday and goes to work. He doesn’t bitch, complain or whine. He doesn’t make excuses. He does his job. At the same point, he does incredible work in the community to not much fan fare. So he not only makes the team/organization better, he makes the community better. That’s a Pat Bowlen Bronco. That’s a member of the organization fans can be proud of. As someone who had the opportunity to cover Thomas, he always had a smile on his face. That’s contagious and not easily replaced in the locker room. I get the move from a business side, but I hate it from fan side. My hope is DT tears it up with the Texans. Thank you, DT. - Ian St. Clair

This can never be traded. pic.twitter.com/5n8PCYUdc9

Share your favorite DT moment with the Broncos in the comments section below.

Broncos Country thanks you, Demaryius