Leadership needs to begin with the quarterback 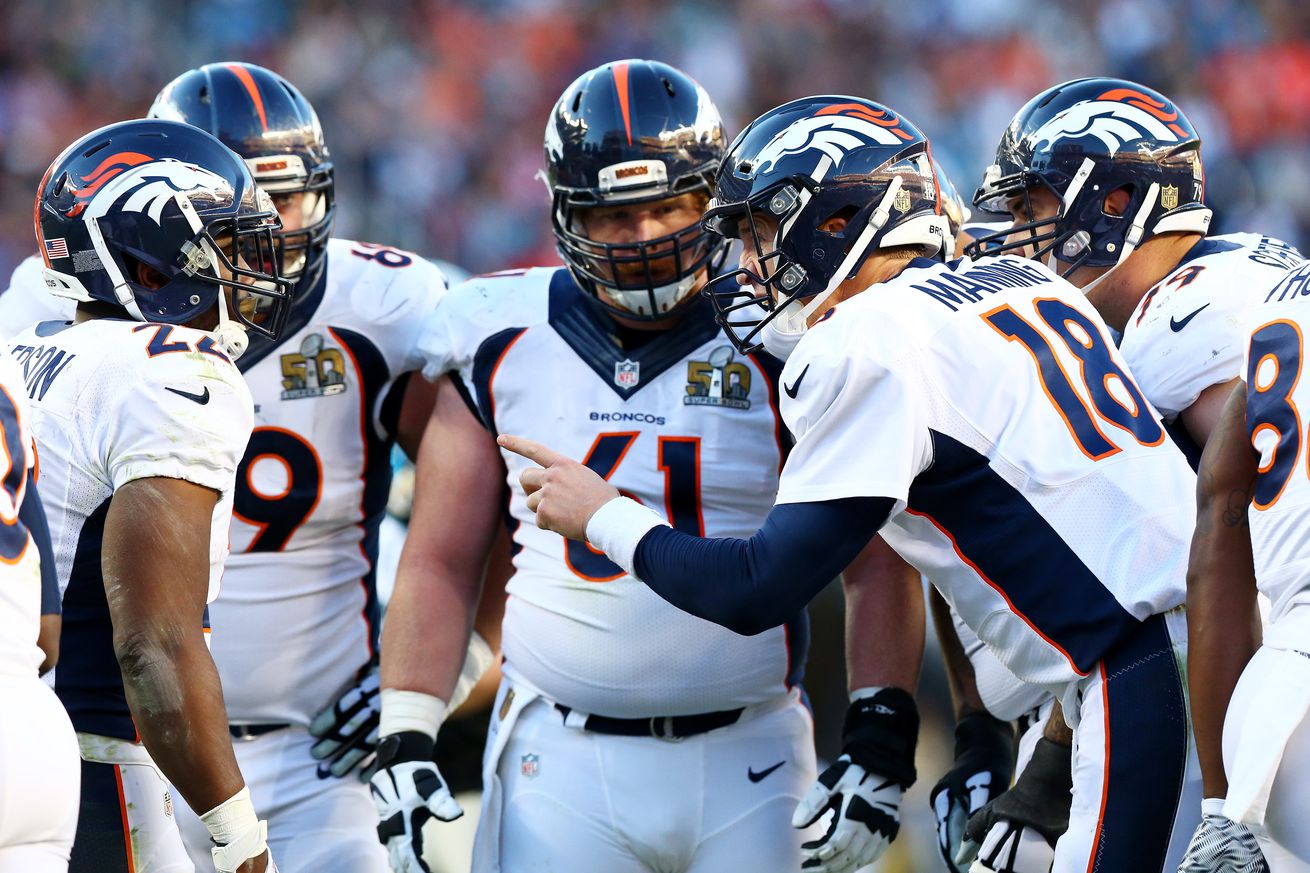 Sure we have a lot of players who are leaders and who can step up to take on a bigger Leadership role. But it's still the quarterback who needs to have the most ability to command his team.

A little has been said regarding a potential leadership void on the Broncos now that Peyton Manning has retired, Brock Osweiler has vacated and David Bruton has left for greener starting pastures.

But while several see great leadership potential among other offensive players like Emmanuel Sanders and C.J.Anderson or defensive stalwarts like DeMarcus Ware and Chris Harris Jr., I believe there could be more of a loss than we realize without our top quarterbacks on the roster.

Don't get me wrong, I don't think we're "in trouble," and I'm certainly not advocating for Manning or Os to be here, but I think any team without a quarterback as one of its big team leaders suffers more than we probably want to admit. If you look back at previous Broncos quarterbacks not named Elway or Manning, you can see this dynamic.

Tim Tebow and Jake Plummer had strong leadership quality, and they led the Broncos to success - partly from their ability and mostly from the confidence they inspired among their teammates. Conversely, Brian Griese or Kyle Orton both had mediocre talent, but that wasn't as big of an issue as their inability to be seen as the team's leader.

More than any other position on the football team, the quarterback needs to be a leader. Even Gary Kubiak noted this week during his press conference round table that not having Manning in the Locker Room will be missed because of that quality.

"Those guys will walk in that locker room this year, and he's not down there at that end," Kubiak pointed out. "A lot of guys leaned on him from a leadership standpoint. A lot of people in the organization, not just the players. So that will definitely be missed and that's a big locker to fill. I think we all understand that."

And it doesn't mean that Sanders or Anderson - or even Matt Paradis - couldn't do it. Or that Ware or Darian Stewart couldn't be that leader for the whole team.

But there is something about your quarterback - the guy who holds the position most responsible for steering the game - being a leader in the locker room.

So, say what you will about Mark Sanchez, but I think he actually has an advantage over Colin Kaepernick, Josh McCown, even Trevor Siemian and definitely any rookie John Elway may take in the draft because he does have that leadership quality - even if not the best player on the offense.

In fact, it was the poise and confidence he displayed in his presser that made me think Sanchez could actually lead this relatively same group of talented guys that just won a Super Bowl but is missing a commander. And as T.J. Ward pointed out - however euphemistic it may have been - Sanchez has experience, and he has experience in high-pressured games.

"We're going to be a different football team and it's going to be a different year," Kubiak admitted, adding that his approach is to focus on having the same standard but working with whatever guys he has on the team. "I've never been one to talk about, ‘We're going to do this,' or, ‘We're going to do that.' I think we need to get this next football team as good as we possibly can. I think we got everything we could out of last year's. I feel good about that, but now it's time to move on."

Can the Broncos win the Super Bowl with Mark Sanchez as their starting quarterback? - The Denver Post
Do you think Denver would really be willing to have Mark Sanchez under center when the team opens defense of its NFL championship in September?

REPORT: The Denver Broncos have interest in Josh McCown | Mile High Sports
With the signing of Robert Griffin III, the Browns are ready to move on from Josh McCown, and the Broncos are interested

Broncos on the hunt for a fullback to help with running game - NFL Nation- ESPN
Gary Kubiak didn't use utilize a fullback on many snaps last season. That could change in 2016.

Evaluating the top five players that John Elway let walk | Mile High Sports
One of the most difficult jobs of a general manager is to decide which players to re-sign and which ones to let walk. How has John Elway done in these decisions?

John Elway: 'We're better, and we'll continue to get better'
Retaining C.J. Anderson was a big part of that, the Broncos' general manager said at the NFL Annual Meeting on Monday.

NFL coaches join fans in angst over 'nefarious' catch rule - NFL Nation- ESPN
Count coaches such as Bill O'Brien and John Harbaugh as being in the same boat with confused fans when it comes to what the NFL considers a catch.

Patrick Robinson, Indianapolis Colts agree to terms
Free-agent cornerback Patrick Robinson is joining the Colts on what is reportedly a three-year deal.

NFL’s lawyer in Brady appeal is pressed to correct misstatements to Court | ProFootballTalk
When NFL appellate counsel Paul Clement made misstatements of fact to the U.S. Court of Appeals for the SECOND Circuit in connection with the Tom Brady case, NFLPA lawyer Jeffrey Kessler didn't correct him. After the hearing ended, another lawyer with an interest in the case did.

John Fox lauds Chicago Bears' youth movement - NFL Nation- ESPN
John Fox said he's pleased with the direction of the Bears, who have re-tooled their roster in the past year to become one of the NFL's youngest teams.

Sweet 16 run brings Iowa State and Fred Hoiberg together again
A road trip will take Fred Hoiberg out of Chicago for Iowa State's game Friday. But he hopes to be back in town to see them play on Sunday.

Leadership needs to begin with the quarterback