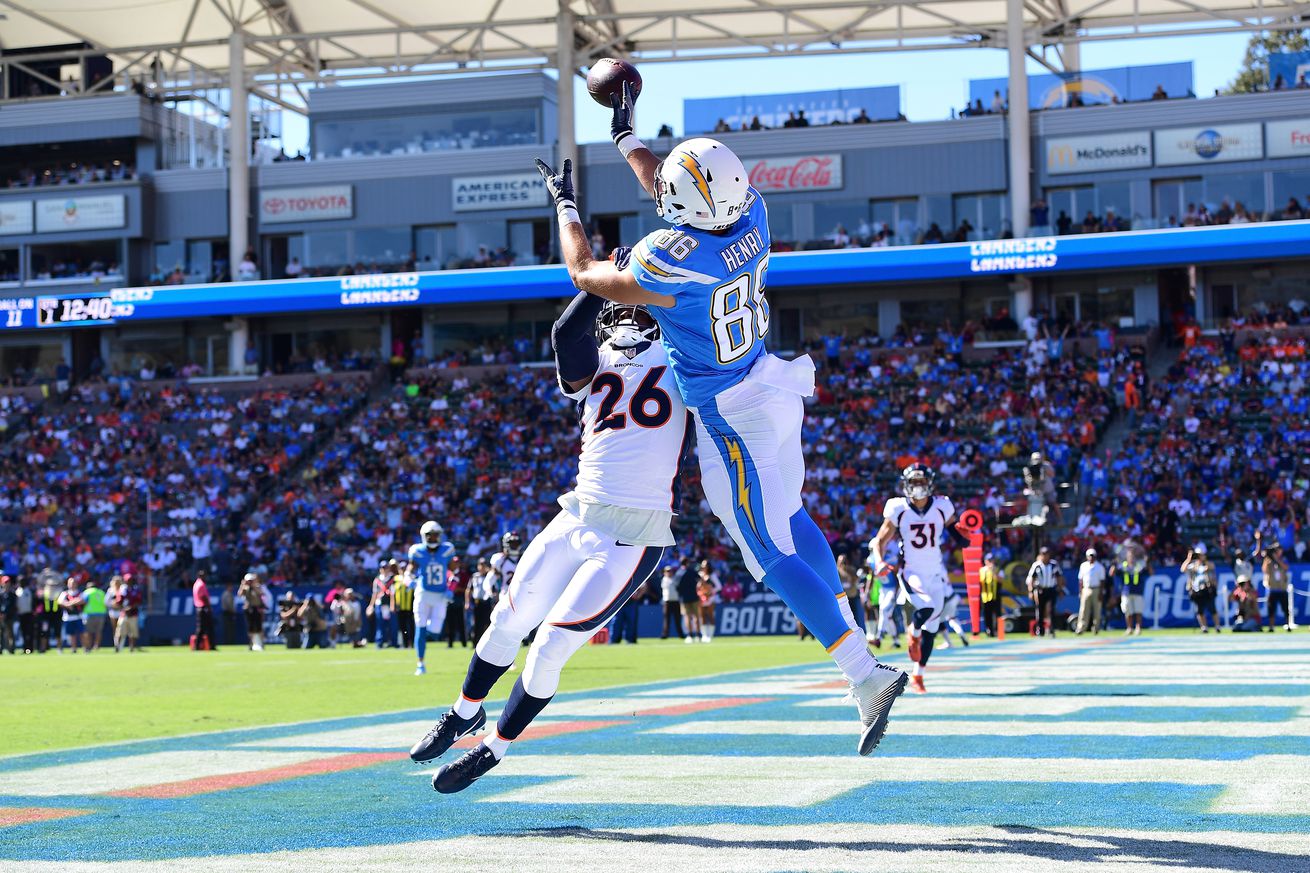 If you heard a thud, that’d be the Broncos dropping down the power rankings.

A bad loss to a bad Giants team was one thing. But getting shut out for the first time in 25 years the very next week? By the weakest of their AFC West competitors? That’s going to leave a mark, no matter how orange your glasses are. The Broncos’ historically bad offensive performance against the Chargers certainly hurt the team, not only in the standings but also in reputation.

Let’s inspect the damage in the Broncos’ Week 8 power rankings around the web:

Last week I expressed concern that the Broncos’ offense had been exposed as a paper tiger. Well, I was wrong. The Broncos’ offense isn’t a tiger or anything vaguely resembling something that dangerous. It’s more like a paper gerbil. Ugh.

The entire offense stunk it up, but Trevor Siemian was particularly bad. When things go south, the team looks at the QB for the spark that’s needed to turn things around. That was totally lacking from Siemian, and as a result the Broncos were shut out in what was likely the easiest of the four game stretch that will culminate in a home stand vs the Patriots.

There’s no silver lining this week. The Broncos got shut out, which hadn’t happened in so long that 18 of the guys on the roster (34% of the 53) weren’t even alive for the last one.

I expected I’d need to drop the Broncos some during this four game stretch, but now? Last week I dropped Green Bay 15 spots because they lost both their game and Aaron Rodgers. This week, the Broncos drop 14 spots. Yes, the shutout loss and what it says about our offense & our team’s prospects is roughly equivalent to losing a future Hall of Fame QB. The Broncos are staring the prospect of 3-6 in the face, and major changes are needed if this team is going to earn a playoff spot.

Per usual: Note that these are “hope” rankings based on the outcome of the most recent game, not power rankings and certainly not standings.

That said, I can’t fathom how the shutout didn’t earn a lowlight in the Low Spirits section of the post.

The Denver Broncos need to figure out who they are—and that's a team that can lean on its defense. Whether it's boneheaded mistakes from quarterback Trevor Siemian or costly turnovers, the Broncos keep shooting themselves in the foot. They're doing so because they keep the focal point away from the defense.

The defense was again great against the Chargers. However, A.J. Derby's fumble and the punt-return touchdown that was allowed were huge. Siemian hasn't been playing well and threw another interception.

Denver could be a Super Bowl-caliber team. All the Broncos need to do is trust the defense and stay conservative on offense. Yet the offense keeps making things competitive with its miscues. I keep waiting for the Broncos to fix this, but maybe it's not going to happen.

Perhaps this is going to be the same kind of Denver team we saw in 2016. That would be a shame because this is one of the great NFL defense we've seen.

Some pretty kind words here from Chris Simms. And while I appreciate them, I’m not sure the Broncos deserve them... or quite as much benefit of the doubt as he’s giving them.

5.7 percent. The Broncos have lost three of their past four games, with Trevor Siemian throwing two touchdowns (and five interceptions) over that stretch. The offense hasn't mustered more than 16 points in the past four contests, and Denver's chances of winning the division have dropped below 6 percent as a result.

Outside of the Cowboys game in Week 2, Siemian has thrown 6 interceptions and just 4 touchdowns.

The key player for any Broncos offensive turnaround is probably Demaryius Thomas. He had a big game against the Giants, but sandwiched between that was a one-catch, 11-yard game against the Raiders and a two-catch, 9-yard game against the Chargers. The coaches have to get him the ball and Thomas has to produce more. Thomas is a true No. 1 receiver and the Broncos can’t allow him to disappear for full games like they have.

I only included the ranking blurb, but the entire main body of Frank Schwab’s power ranking article for the week was about John Elway & the Denver Broncos. It’s worth a read. That said, I’ve got to take a bit of an issue with the blurb. Yes, the Broncos need to get Demaryius Thomas the ball more. But that starts with Trevor Siemian. DT has only 2 dropped passes on the year. So if he’s not dropping the ball much, then the issue must be somewhere in the process of delivering the ball to him. And that’s all Trevor.

If you thought a 21-0 road loss to the Bolts was ugly, just wait. Next up is a trip to Kansas City ... followed by a visit to Philadelphia.

Someone get Trevor Siemian a blindfold and a cigarette. This might get ugly.

Not much to glean from Sunday's game against the Chargers. Well, other than the fact that the Broncos actually managed to do worse than they did in their 23-10 debacle versus the Giants in Week 6. How about getting blanked 21-zip by the Bolts? Shocking. The theory was that Denver overlooked New York. The Broncos must have not even heard of the Chargers. (That's OK; half of L.A. hasn't, either.) The last time Denver got shut out was way back in 1992. That game was also in L.A. Rookie Tommy Maddox started in place of John Elway. Wonder what the former QB thinks of his current offense from the GM's seat.

What’s sad is that the crowd on Sunday was probably 2⁄3 Broncos fans. Broncos Country gave the team a 9th home game in Los Angeles, and the offense rewarded them by laying an egg.

The Denver Broncos (13th to 18th) continue to plummet as their running game disappears and Trevor Siemian reminds us that he’s not going to carry an offense.

Opposing defenses have decided to take away the running game and force Broncos QB Trevor Siemian to try to beat them. He can’t do it.

If only. The Broncos are actually facing fewer stacked boxes this season than most teams. But the team has abandoned the run game for some reason, and the constant issues in the passing offense are causing the Broncos to end up in big deficits in the 2nd half, which dictates even less rushing.

Their offense is offensive. They have to get more out of it or they can forget about the playoffs. They face a pivotal division game with the Chiefs. 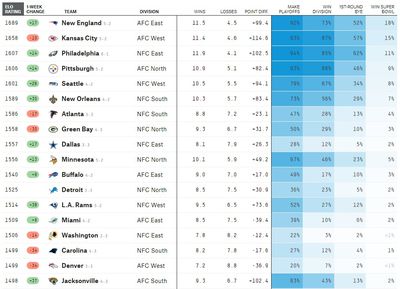 If you’re having a hard time reading that picture on your device, it’s probably because I had to zoom my screen out to take a screenshot that included the Broncos. They fell 10 spots to 17th, with a new expected W/L of 7-9 and chances of making the playoffs dwindling to just 20%. The odds that FiveThirtyEight calculates of the Broncos getting a first round bye or winning the Super Bowl are now too small to bother discussing.

Numberfire was my preferred stat site earlier in the season, but at this point I have to wonder how legitimate their algorithm is if it’s still got the Broncos as a top 10 team. That, and the wildly inconsistent Jaguars ranked 1st? And the Patriots just 10th? Yeah, it’s weird.

After two weeks, the Broncos ranked fifth in net points per possession and sixth in first downs per series. They now sit 23rd and 20th in both categories, respectively, and they have just one touchdown in their last 11 quarters of play.

Defense is keeping the Broncos alive; they lead the league in fewest yards allowed on a per-game and per-possession basis and rank second in yards allowed per play.

I can’t blame Mase for landing on the optimistic end of the spectrum. And the defense is truly amazing, and a worthy continuation of the historically good defense the Broncos have enjoyed for a couple of years now. But this time it doesn’t appear that the D can save an offense that’s even worse than the moribund 2015 unit. And that’s a shame.

Last week I wrote that failure in the four game stretch that just began with the Chargers would see the Broncos’ rankings plummet in short order. Unfortunately, so far, that’s been spot on. And the Chargers were likely the easiest of the four teams. The Chiefs’ defense is vulnerable, which is a nice little spark of hope, but the offense has been so bad lately that that opportunity might not even matter.

If the offense from the last two weeks shows up again against the Chiefs on Monday night, I’m predicting that more than half of the power rankers we track will have Denver somewhere in the 20s next week.