Talib: Still ‘nobody flyin’ in the No Fly Zone 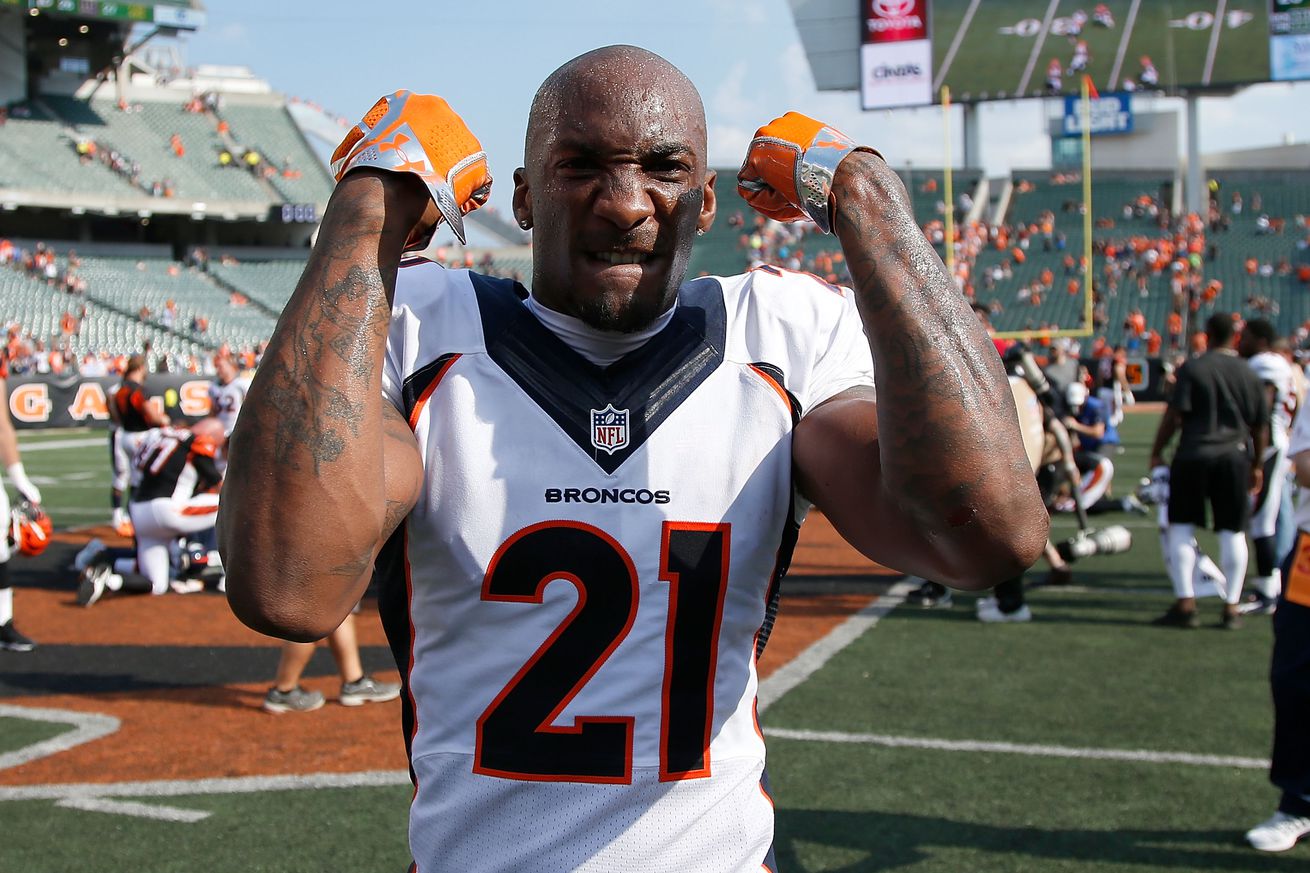 Even without T.J. Ward, the No Fly Zone is ready to keep the air space free when the Chargers come to town Monday.

Aqib Talib is hands down my favorite interviewee these days from the Broncos.

He keeps it real, man.

When Eric Goodman and Les Shapiro of The Afternoon Drive spoke to him Monday and asked about losing teammate T.J. Ward to the Buccaneers, Shapiro asked if it was “like when a friend dies, you mourn for a day and then move on?”

Talib interrupted immediately to remind Shapiro that no one has died.

“He ain’t die though. Don’t compare it to no dyin’ or no death. We’re happy for him. He’s making half-million dollars more, man. We look at the positive.” - Aqib Talib on T.J. Ward being cut

“He ain’t die though. Don’t compare it to no dyin’ or no death,” the cornerback said. “He went onto another team. He’s still in our group chat. We still holla at him. We’re happy for him. He’s making half-million dollars more, man. We look at the positive. Glass half full.”

Talib also understands that the NFL is a business and getting cut or traded - even when you least expect it - is the way it goes. That’s how it happened to him when he was traded from the Bucs in his fifth year in the league.

“I was brothers with all the guys when I left Tampa. I was born into the NFL with those guys. I was there four, four-and-a-half years, and it came out of the blue, had no idea getting traded. Bam! I was gone. Part of being professionals. Put us anywhere and we adjust, we adapt. We’re going to be cool.”

And he’s sure Ward is going to do just fine in Tampa.

“It was unexpected. But it was a great move for us. We’ve got a good backup. If Trevor goes down, we know what [Osweiler] can do. It’s security.” - Aqib Talib

“It’s football, man. It’s the nature of the business. We’ve all seen it happen before,” Talib said, noting that when you get “three super-talented safeties who are 23 years old,” the move wasn’t surprising. “Hey that’s part of what makes us professionals man, we can get somewhere and adjust so fast. T.J., man, he’s going to get to Tampa and adjust so fast and lead those guys.”

Speaking to the media at large on Monday, Talib was asked if the No Fly Zone would suffer without Ward.

As usual, he had the best quote ever.

#Broncos' @AqibTalib21 on the #NoFlyZone even w/o his homie T.J. Ward:

Mostly, Talib is ready to get the season started.

“I feel great. Not going to the playoffs, it seems like it’s been so long since we’ve played a real football game,” he said. “I’m ready for it to be here, man.”

And he’s ready to start it with Brock Osweiler as the new backup QB.

“It was unexpected. But it was a great move for us. We’ve got a good backup,” he said, adding that ultimately they didn’t know how much they could trust Sloter if Trevor went down. “If Trevor goes down, we know what [Osweiler] can do. It’s security.”

But as for looking ahead to just Week 1, Talib knows the Broncos’ heralded defense is facing one of the toughest quarterbacks in the NFL in Philip Rivers.

“He’s one of the best in our league. We’ve got to really prepare for him. Never going to be easy,” Talib said. “He’s one of the smartest guys in the league. He can make all the throws. He is super competitive, so it’s a great way to start the season.”

The segment is worth listening to just to hear Talib talk (from 2:30-7:00), but the hosts start an interesting conversation (that they don’t finish) discussing the various scenarios that could lead to the Broncos deciding whether to keep three quarterbacks on the roster - which is contingent upon Osweiler coming out of “football rehab” with glowing reviews and Paxton Lynch getting healthy by Week 5 or 6 as expected.

I will not even begin to discuss “what could be” with all the possible scenarios regarding the quarterbacks, but I’ll “throw it a few out there” from Goodman so you can argue about them ;)

If Osweiler “doesn’t show well,” then maybe the Broncos let him go once Lynch is healthy.

If Broncos get off to a slow start and Siemian is pulled and Osweiler isn’t that good, maybe they wait until Lynch is healthy.

If Siemian is terrific and Osweiler appears to be a good back up, Broncos are most likely going to hang on to No. 17 rather than “roll the dice with Lynch” in case Siemian were to get hurt and Broncos needed a backup in the playoffs.

Now, go discuss amongst yourselves.

Talib: Still ‘nobody flyin’ in the No Fly Zone