Broncos draft grades for picking Garett Bolles in the first round 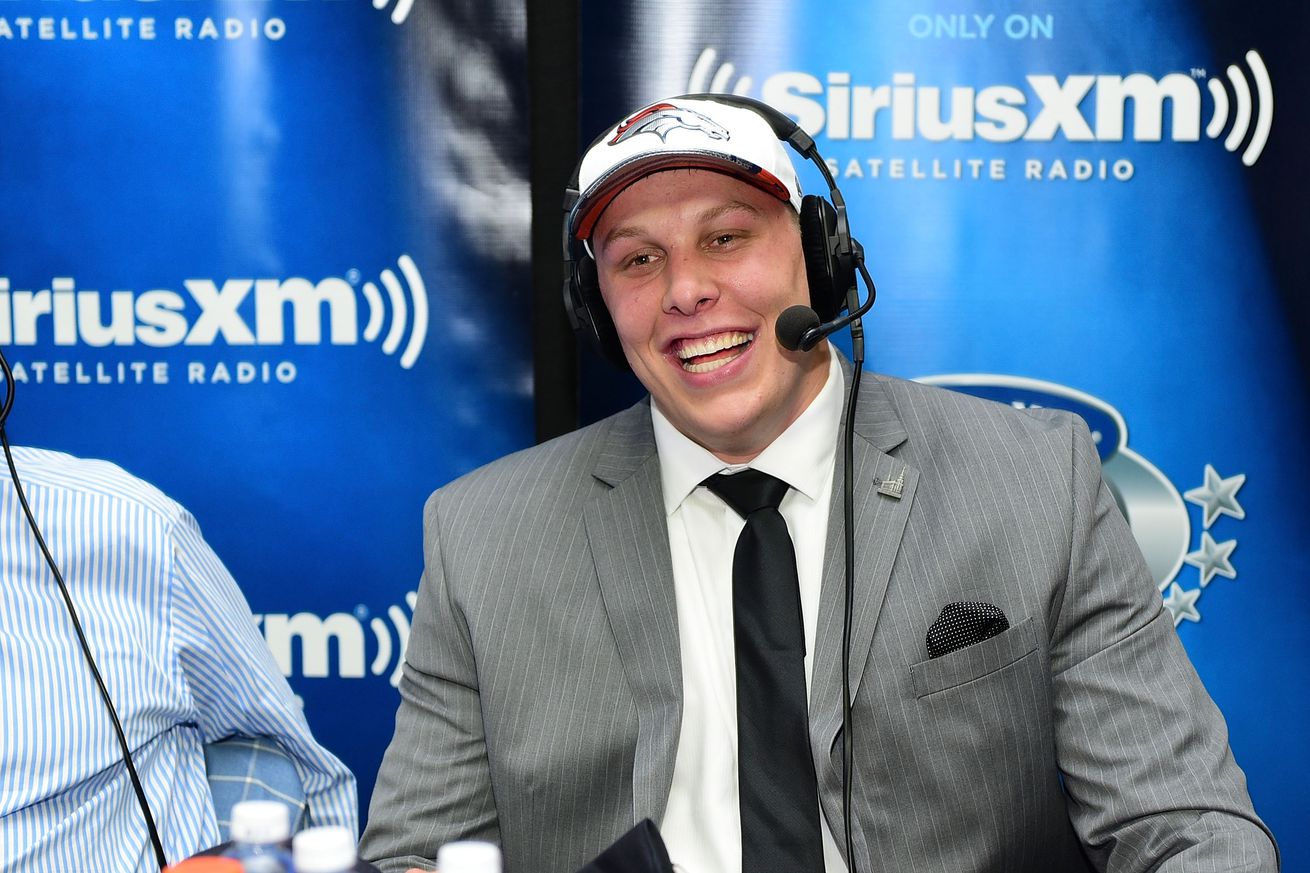 Here are the grades given to the Denver Broncos for their first round pick in the 2017 NFL Draft.

The Denver Broncos selected now former Utah offensive Tackle Garett Bolles with the 20th pick of the first round. While not a sexy pick, or even a popular pick, John Elway went with biggest need and now we all just need it to pay off.

If you ask fans what their instant grade for the pick was, they end up all over the place from A to F. We’ve included that poll again in this post.

Christopher Hart - C. It addresses a big need, but I am not sure he was the right move for Denver, especially with offers to move down and acquire more picks. With OT addressed, Denver can focus on other positions and hopefully bolster other positions of need on Day 2.

Tim Lynch - B. The Broncos drafted need. They liked Garett Bolles a lot, so they took him despite some elite talent at other positions falling to the early 20s. Bolles has the attitude and the nasty that John Elway wants in the trenches, so he might actually be the best pick they could have made for their current roster.

Ian St. Clair - B+. The Broncos drafted for need, but I think it’s clear they had him at the top of their board. I also tend to listen to guys who played the position and know a thing or two about this stuff. Both Ross Tucker and Mark Schlereth love the pick. This also is clear: Bolles is nasty, he will bust his ass and do whatever he can to be great ... on the field and off.

Laurie Lattimore-Volkmann - C+/B-. I was not in favor of taking an offensive lineman in the first round, despite the Broncos' obvious need for a better O-line. With so many good tight ends and corners, I would have gone that direction. But having the "offensive version of Derek Wolfe" isn't a bad thing, so I'll jump on the Bolles train.

Adam Malnati - D+. The plus is because Bolles addressed a need, but with so much talent on the board, this was a mistake. It was disappointing to see Elway get away from what makes the Broncos great, which is drafting the best player on the board. Not questioning talent, or work ethic. Just looking at players who remained on the board while Bolles walked out with his baby boy and wrapped him in that Broncos jersey. Made for a great pic, just not a great pick.

Sadaraine - C-. Denver picked a solid looking tackle who's already 25 in a draft that saw a lot of really great picks drop to #20. I'm not completely hating the pick, but I think our GM really missed a huge opportunity to add some serious talent to our team. I'm excited to know we won't be holding our only hopes in Ty Sambrailo at LT this year, but the arm-chair GM in me feels like this wasn't a great add for the Broncos long-term.

Jeff Essary - C-. This is a "damned if you do, damned if you don't" situation that Denver backed themselves into with the tackle position. If they passed on a tackle at #20, there would have been collective outrage as fans have been on John Elway's case for not prioritizing the line for years now. So what happens when we actually prioritize the line and take a tackle in the first round: we get stuck with one of the worst tackle classes to come out in years and other talent around us at #20 that we could have picked.

Scotty Payne - A. Draft grades are dumb, but I don't want to be left out so I'll add my two cents. The Broncos filled a need in a tackle class that really lacks depth. It's the guy they wanted and people who know more about offensive line play(Stink for example) like Bolles, so it's whatever. Bolles has a mean streak, is a nasty run blocker, and will join the Broncos and quickly establish himself as the Broncos left tackle.

I gave him an A because why not? It fills a big need and clearly was the player the Broncos wanted all along, so it works. Plus draft grades are dumb anyways so a high grade is always nice to see.

Now that the dust is settling on the first round, and we’ve all had a chance to sleep on some of the collective disappointment that I’m sure a lot of Broncos Country felt with this pick, let’s take a look at the grades given out around web for Denver drafting Garrett Bolles #20 overall.

The skinny: Garett Bolles is an athletic, tough-minded player. He's also an older prospect who has lived through a lot. Some teams have concerns about his ability to handle complex line adjustments. The team certainly needed a left tackle, but Ryan Ramczyk was also available here. It will be interesting to compare the careers of those two players.

He's an older player at 25, but he's a Day 1 starter for them at left tackle -- filling a major need.

Howard would have been tough to turn down had he made it one more spot. This, however, is where the Broncos always appeared to be headed in Round 1. The only real mystery was which tackle they would choose here in an attempt to fix their O-line. Bolles will be old for a rookie, but he also should be penciled in as Denver’s Day One starter on the left side, with Donald Stephenson and Menelik Watson battling it out on the right. Bolles’s ability on the move will give him a chance to be an elite run blocker within the Denver scheme.

I thought the Seahawks were going to jump the Broncos for Garett Bolles, but apparently not. Bolles is the most athletic offensive tackle in this class. He has some off-the-field issues, but not anything major. The Broncos have taken chances on players like that before though, and it's worked out, so Bolles seems like a solid pick. He obviously fills a massive need on the roster, as Denver had arguably the worst offensive line in the NFL heading into the draft. It's unclear if Bolles will pan out, but the Broncos actually have a chance to block well now.

Weaknesses: He's a soon-to-be 25-year-old who barely knows what he is doing on the field.

We had to get a picture of Garett Bolles with his baby into these grades: a kid so adorable Philly fans could barely boo him! Someday, Bolles will learn how to hold him. (Linemen don't carry things well.)

Bolles' inspirational story makes The Blind Side look like an infomercial for a juicer. He was kicked out of multiple high schools, built up a long teenage rap sheet of drugs and vandalism, and was kicked out of his home in 2011. Bolles' lacrosse coach took him in, and Bolles slowly put his life back together, went on Mormon mission and worked his way up from Snow College to Utah.

Tremendous. But can Bolles play?

If a 19-year-old produced Bolles' tape, he'd be projected as a high first-rounder in a future draft. The quickness, power, finish and energy are all there. But Bolles' technique often boils down to "go hit guy." He lunges, gets off balance, winds up on the ground, gets out-leveraged, and so forth. At 25 by the start of training camp, he will be a raw project who is older than players drafted two years ago.

It will be an uphill climb, which is nothing new for Bolles.

Menelik Watson and Donald Stephenson are penciled in as the Broncos tackles right now, Neither is an ideal solution, but there are no ideal solutions in this draft class. Bolles is a good upside selection. But if the Broncos really expect help right away at offensive tackle, they did this draft wrong.

Everyone knew the Broncos were going to take an offensive tackle. In Bolles they get a stupendous athlete and can play left tackle thanks to his foot quickness. I preferred Ryan Ramczyk of Wisconsin because he’s more of an all-around blocker, but you can’t fault the pick totally. His attitude will rub off on teammates.

It seems that the consensus among the major media outlets is that no one really loves the pick, but it’s hard to fault the pick given how bad Denver’s offensive line was and how badly they needed a left tackle. It’s hard to grade any pick too horribly when it fills such a gaping hole on the roster.

What are your thoughts on the draft grades Denver received? Any you disagree with?

Broncos draft grades for picking Garett Bolles in the first round