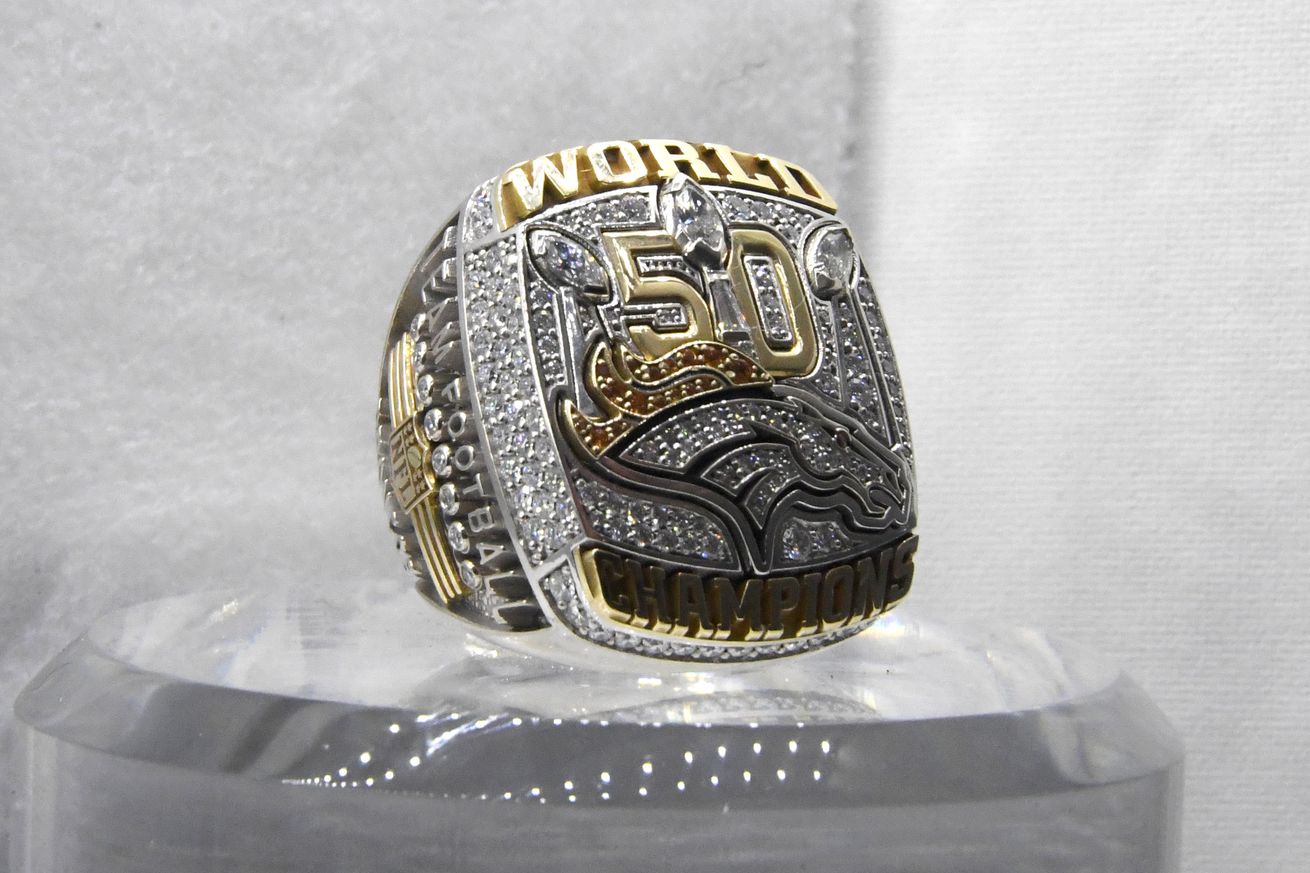 Jumping in on roster moves because it's never too early to talk about our future.

I have zero desire to talk about the game in Houston. I'm still savoring the last day of being The World Champions. Instead, I'm going to jump the gun and talk about our roster and moves we could make.

They say you should never draft a position of need, you should draft to build for depth and for the future. The reason is, if you have a glaring need, it means you've done something wrong. It means that you're expecting a rookie to fill a glaring hole. As a bonus, Drafting is cheap. It allows a team to spend elsewhere on re-signing current players and bringing in free agents.

Drafting a glaring need in a first round is often a recipe for disaster because most positions need a year or more to develop. Not to mention, if you have a gaping hole, it dumps a lot of pressure and play time on that rookie. Unfortunately, we have a few glaring needs. The question is, do we draft or buy?

Here's my list of what we need in order of importance and then notes on if we use the draft, Free Agency, or both.

Right Tackle. With three injuries to Trevor Siemian and Paxton Lynch being almost a rookie, Denver can't be messing around with a neophyte RT. They need someone in there to protect an injury prone QB or a new starter. Not a, learning on the job, guy. History shows, that a new starter like Lynch, is going to need a little more time in the beginning of the season to process. Both guys need better than what they had. My choice, Ricky Wagner. He's 27 and the best fir and price.

Left Guard. See above. It would best suit Denver to buy both. Ronald Leary, the former Memphis Tiger, is my top choice. Like Wagner, he's younger and less expensive than others. Plus, Dallas isn't bringing him back . Denver can work out a deal with Russell Okung to keep him. There's really not a better option, plus Denver needs some some continuity.

If we draft a LG, then he moves up the chain from a depth number and build for the future guy and needs to taken in the second round. Matt Paradis is also a concern. The type of hip surgery he had, can often be the beginning of the end. There are some decent centers in this class. One or two who could play Center and guard like Ethan Pocic. Drafting him could fill two wants at once.

Must add in here, finding good Guards and especially tackles from the college spread system is really tough. They're just not ready mentally and often haven't been coached for a pro-style. This can limit who we draft/ Not to mention, most tackles are guards int he NFL, narrowing it down even more. Here's a good article on why.

Our next need is a beastie Running Back. This is one of the few positions where rookies can excel. Especially with a stout Offensive Line. This would be my first draft choice. CJ Anderson brings so much knowledge and power to the position; however, he's yet to play a full season healthy. Devontae Booker showed power, but no vision. To find holes or to protect. Doubtful we keep Juwan Thompson, and Justin Forsett is done. Is RB a position we can get away from drafting? No. This is a need and a want. Plus, not a position to bring a FA in for.

While most of Broncos Country would love Christian McCaffrey, drafting him in the first round isn't where he should be picked. We need an every down guy like Dalvin Cook or Leonard Fournette. If we grab another, Kareen Hunt is worth a pick in a later round, same for Jamaal Williams.

A QB's best friend is a top notch RB. His next in passing system is a Slot and/or Tight End safety net. We have three signed TE's. Virgil Green is a blocker; however catching isn't his forte, plus I could see him being cut or traded. Jeff Heuerman and AJ Derby each showed flashes of being catching blockers, but in the offense we had last year, who knows what they're capable of? OJ Howard is a name everyone wants, but really think we can get a TE in the second to fill out any wants. This class has several. David Njoku and Michael Roberts potential fits.

We also have Andy Janovich. This matters because it means we'll be using him more creatively, which in essence means bringing in a smaller TS like Evan Engram, would be foolish unless we trade Jano. Before he got hurt, he was the top ranked FB. We drafted him in the sixth round, so a fifth round pick or for a player could happen.

Slot. Emmanuel Sanders has the speed, quickness and hands to be a slot. Not so sure about the durability of being the hammered guy in a crossing route. He's already had two concussions as our wideout. Not sure how long he'd last as the guy in the middle. IF we did put him there, it would help the team as its easier to find a wideout, than slot.

Outside of Khalif Raymond, the rest of our guys, if we keep them all, are wide outs or too slow for the Y guy. This is a position I see us drafting. Can we get by without drafting a slot or TE? Yes. Will we? No. Don't see Elway drafting a slot in the first round. Could see maybe McCaffrey in the second though. Ryan Switzer.

Interior line backer, defensive end and nose tackle. Three positions we may have answers for, but depth is needed and also to fill future needs. Todd Davis was lacking this year. Our DL exasperated it, but it was an issue. Brandon Marshall has been dealing with injuries the last two years, does the injury bug continue?

Sylvester Williams is gone. Will Adam Gotsis be the answer? Does Jared Crick step up or is he cut? Once again, we may have the talent in-house, but we need more.

Derek Wolfe is dealing with a continuing neck injury and DeMarcus Ware would need a new contract, and we're not sure where Vance Walker stands. That leaves DE a priority for not only depth, but need. Could Donatari Poe or Calais Campbell be brought in? We have 40 or so cap space to work with. Mike Sullivan is a cap guru, but not sure he can pay 3 OL and a NT. Some guys they could look at, Carlos Watkins, Haason Reddick, DeMarcus Walker, Derek Rivers, Ben Gedeon, Duke Riley, John Johnson.

So, to me our top need that can be filled rather inexpensively, to save for our OL is RB. We have ten picks. And possible players we could trade. Jano, Virgil and Siemian.  At least three picks should be used in trades. This could result in us drafting two in the first round or two in the second. No matter what Elway does, it's a safe bet he targets a RB (or two), a TE (or two), a WR, ILB, DE and NT. A CB would be nice, but there's not a lot out there. They did talk to Marquez White, but he's not Jalen Ramsey.

This is a just an appetizer, something to talk about while we pretend we care about tomorrow. Have a great weekend, all.

Ravens Offseason Priority #1: RT Ricky Wagner - Baltimore Beatdown
Baltimore Ravens franchise player Joe Flacco does many parts of his job description as a quarterback well. Making plays when pressured in the pocket is not one of them. Throughout his career, most...

Sean Payton to install a "scrambler" to keep players off social media | ProFootballTalk
Sean Payton's going to make sure none of his players pull an Antonio Brown. During a radio appearance Friday on the Tiki and Tierney Show on CBS Radio, the Saints coach said he will be utilizing a device which blocks players from using social media before and after games.

DeMarcus Ware likes the idea of potentially playing once again with Tony Romo, but the veteran linebacker knows the Denver Broncos have a plan for Trevor Siemian and Paxton Lynch.

Joey Bosa says Philip Rivers is all in for L.A. move | ProFootballTalk

In the aftermath of the announcement that the Chargers will move from San Diego to Los Angeles, reports/rumors/whatever emerged that quarterback Philip Rivers wasn't all in. Chargers defensive end Joey Bosa declared otherwise on Thursday.

Leonard Fournette previously described his controversial decision to sit out of LSU's bowl game as a mutual one between himself and his coach. On Friday, the RB said his coach made the decision for him.