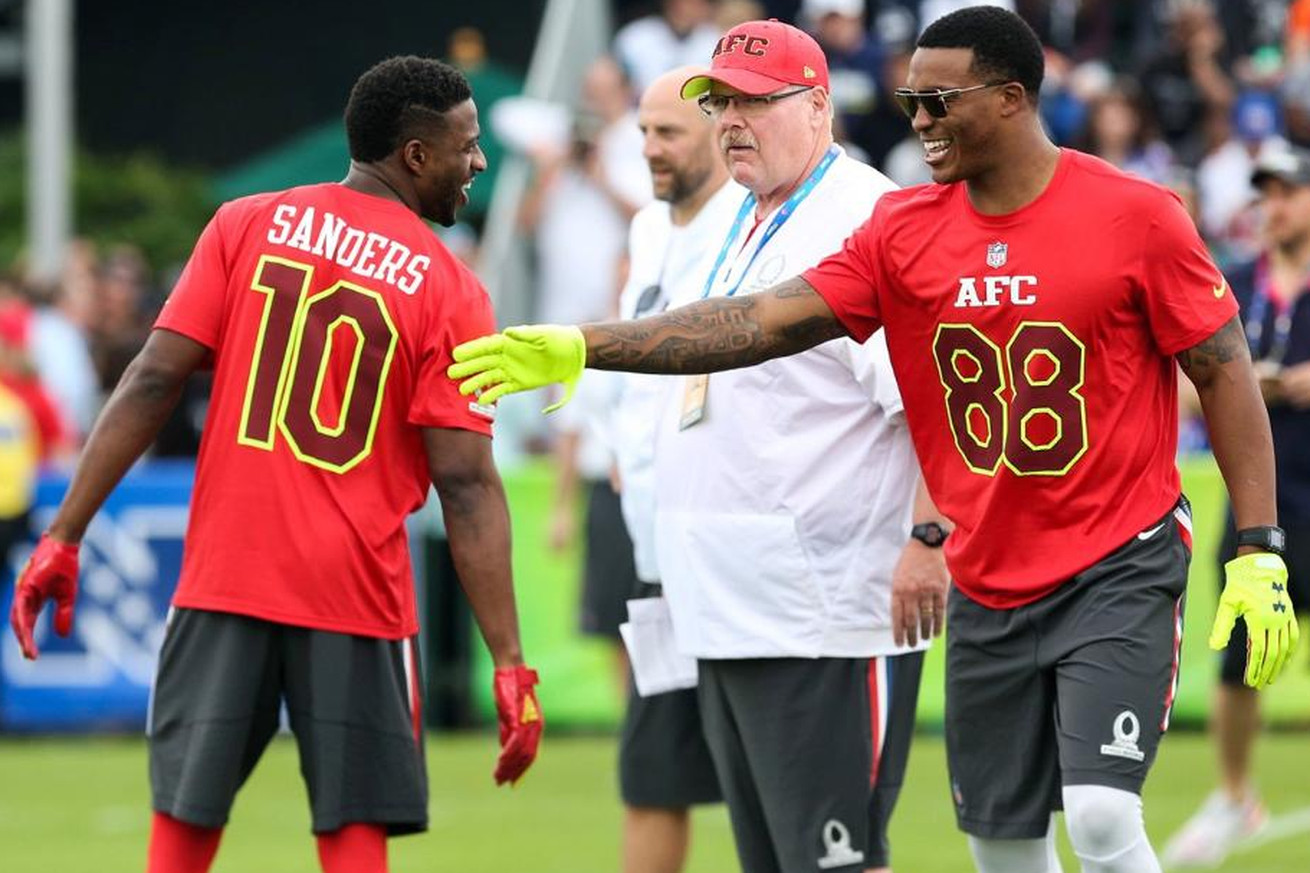 There’s not much going on, but ironically, there’s still football stuff to talk about.

It’s a Friday of essentially a bye week before the final game of the 2016-17 NFL season - featuring one team we hate and one we don’t care too much about - so with the endorsement of Wade Phillips, hopefully we can all just enjoy Lady Gaga next weekend.

But that means a grab-bag of topics to talk about today.

To Pro Bowl or not to Pro Bowl?

That’s not the question.

The question is - how can the NFL make the game something we actually want to watch?

Despite all its shortcomings, the Pro Bowl is still something players aspire to "make" - even with all the third, fourth and fifth alternates being given invitations because the "best" guys are either in the Super Bowl or hurt (or afraid of getting hurt).

So whatever players may say (it’s always "an honor" if they make it and "no big deal" if they don’t), rest assured, they love putting the Pro Bowl on their football resumes (and probably don’t mind the extra cash either).

and at the #ProBowl pic.twitter.com/erdy6bmDei

As the most irrelevant and uninteresting All Star game of the major sports, the NFL at least tried this year to improve the experience by adding back a Pro Bowl Skills Showdown (which may in retrospect provide more entertainment than the game given the inclusion of dodgeball) and by once again pitting the NFC against the AFC.

But if this event is going to appeal to fans as something resembling a football game, the NFL needs to get back to having it be prestigious and not just a big party for the third alternates who haven’t played football since early January.

The fact that fan voting is included is a nice idea in theory but it makes the game a popularity contest rather than a good and fair evaluation of the best players at the position. Coaches and players are much better at choosing true talent among their peers and would field a more skilled team reflecting current studs rather than just fan favorites and/or stars from the previous season.

With the addition of fans being able to retweet any post promoting a player for the Pro Bowl as a "vote" this season, the selection was particularly ridiculous. Although many of the more popular players are also among the best, the rosters aren’t terrible - though I dare say there were plenty of snubs from the Broncos defense in the initial tally. But the system for choosing is flawed and should be abolished and revamped.

Move the game back to after Super Bowl weekend

I kind of liked moving the game between Championship weekend and the Super Bowl, but it definitely takes away from the prestige when it can’t feature players on the two best teams in the NFL (except of course when those teams might be the Patriots, Seahawks, Raiders, Ravens or Chiefs).

But otherwise, the best players - even those in the Super Bowl - should have the opportunity to play.

Safety is a concern and some players won’t play in the game because of fear of injury, but a half-assed football contest is just silly. Either host a flag football game in a jello pit with a three-Mississippi pass rush count, or make it a football game.

Levy heftier fines for illegal hits if you want, but if these players want the distinction of being called All Stars, then they should play like All Stars. If they don’t want the risk, then they don’t get the title.

I’m sure there are a host of other good ideas, but those are my initial thoughts.

Well, those, and always have a dodgeball tournament.

Andrew Mason mentioned a few sleepers for this year’s draft who could be potentials for the Broncos and would be intriguing players to fill some needs on offense while also likely being the best player available.

[email protected]'s got his eyes on some sleepers down at the @SeniorBowlhttps://t.co/SC6ZdqTaL2

Taylor Moton (RT) Western Michigan - Mase called this guy an "outstanding right tackle with a very strong lower body" who is "hard to get dislodged in pass protection but also has quick feet to power downfield in the run game."

Michael Roberts (TE) Toledo - Though the big money will be on Alabama’s O.J. Howard as the best tight end of the 2017 draft class, Mase called Roberts a "good value." With his big 11 3/4-inch hands, Roberts "catches everything, is a huge redzone threat, who also delivered as a blocker" this week at the Senior Bowl.

What the likelihood is that either lands in Denver is way too much speculation for me, but both sound like extremely promising players for our struggling offense.

Praise for the coaching hires

Grading and ranking is always a must in sports, and both NFL.com and SBNation took the bait to comment on the offseason head coaching hires. NFL.com put the Broncos’ hiring of Vance Joseph the third-best hire of the six, and SBNation gave the Broncos the highest marks of the group with an A.

"Joseph is set up to succeed in one of the NFL's strongest organizations, with a top defensive roster and former Chargers head coach Mike McCoy as his offensive coordinator. Promoting secondary coach Joe Woods to defensive coordinator provides continuity on Denver's stronger side of the ball. This ranking partly reflects Denver's track record under Elway. His judgment on these large-scale decisions deserves the benefit of the doubt." - Gregg Rosenthal

"Vance Joseph is unproven, but he’s not exactly walking into a rebuilding project here.

Some will point out Joseph’s only season with the Dolphins didn’t result in huge upticks on the stat sheet. However, it’s difficult for a coach to put his imprint on a defense in just one season. The fact that the Dolphins proved to be resilient enough to play their way into the playoffs this season, after so many dismal years, speaks well of his work there.

Remember, it was Denver’s offense that was the team’s biggest problem this season. Keep an eye on who he hired to be his offensive coordinator - former Chargers head coach Mike McCoy will get that job, one he’s had before from 2010-12." - Jeanna Thomas & Ryan Van Bibber, SBNation

This is all well and good - and nice affirmation from analysts not breathing the Mile High air - but even better are some comments from players/coaches down at the Pro Bowl - about Coach VJ as well as some of his assistants.

Philip Rivers said he knows Denver is happy to have McCoy back on the coaching roster.

"Mike was good, He had a vision of how he wanted to do things, and guys bought in. He was very respectful of what we’d done in the past," Rivers said. "We didn’t have the years we wanted to have...But he’s a good coach. Good man. I know Denver’s probably fired up to get him back."

"The Denver Broncos couldn’t have gotten a better hire. He helped me a lot. Whether it was catching punts, reading gunners or all those good things." - Tyreek Hill on Brock Olivo

Tyreek Hill, who wreaked havoc on the Broncos this past season with his special teams prowess, said the Broncos’ new ST coach Brock Oliva will be a great hire.

"I think Brock does a good job of fundamentals - breaking down the film and just teaching hard work and work ethic," Hill said. "The Denver Broncos couldn’t have gotten a better hire. He helped me a lot. Whether it was catching punts, reading gunners or all those good things."

"If he needed a nail, he used a nail. If he needed a hammer, he used a hammer," Wake said, noting that the Dolphins had to use a lot of personnel throughout the season due to injuries. "Each guy had an opportunity to be at the point of attack. Whether it was corners blitzing off the edge, linebackers blitzing up the middle and obviously [defensive] ends and nose tackles getting after the quarterback. He definitely used the guys that we had to our best skill set."

Tony Romo isn't Denver Broncos' solution, he delays them finding one - Denver Broncos Blog- ESPN
The two Super Bowl teams and the two they beat to get there all have homegrown QBs. That should be a lesson, as the Broncos consider Tony Romo.

Opponents' perspective on Broncos' coaching staff
It looks like a great group.

Grading every NFL head coach hired in 2017 - SBNation.com
Six teams will have new head coaches in 2017. Which ones hired the right candidate? (hint: only one team got an A).

Ranking NFL coaching hires: Anthony Lynn at No. 1 - NFL.com
Will Anthony Lynn's Chargers be in the playoffs a year from now? What's the most encouraging thing about Sean McVay's tenure with the Rams so far? Gregg Rosenthal ranks the hires from this cycle.

MTS notebook: Cooper Kupp among Senior Bowl Day 3 stars - NFL.com
Cooper Kupp starred again on Thursday, capping a strong week of Senior Bowl practices for the rising WR. He wasn't the only pass-catcher who had scouts in Mobile buzzing, though.

That's so Browns: Super Bowl overflows with ex-Cleveland guys - Cleveland Browns Blog- ESPN
It's not easy being a Browns fan, and having to watch several former Cleveland players and coaches in the Super Bowl will be uniquely painful.

NFC triumphs in revamped Pro Bowl Skills Showdown - NFL.com
The new, reimagined skills challenge at the 2017 Pro Bowl in Orlando, Fla. did not disappoint. Conor Orr breaks down the thrilling action and highlights from the day's events.

Bill Belichick: Most of plan will be installed before Super Bowl arrival - New England Patriots Blog- ESPN
The Patriots will practice four times at Gillette Stadium before leaving for Houston, where most of their work will be situational.

Super Bowl LI -- Georgia gas station suspends sale of Sam Adams beer
A Georgia gas-station manager says he had to do something to show America "that Atlanta has a passionate fan base" -- so he's halting sales of the Boston-based beer Sam Adams.

Way-too-early Super Bowl LII odds for every NFL team - 2017
Which teams are Vegas favorites, and which ones are long shots for next year's Super Bowl in Minneapolis? NFL Nation reporters examine the odds for all 32 franchises.

Ranking Super Bowl-winning head coaches - Is Bill Belichick of New England Patriots best ever? NFL 2017
Patriots coach Bill Belichick could get his fifth championship soon, cementing his case among the best all time. From 1 to 31, John Clayton ranks every coach who has won a Super Bowl - and one Broncos coach makes the Top 10.

Ranking the greatest QB seasons in NFL history
Is Tom Brady the GOAT? Comparing today's players with old-time greats has always been a problem. But it's not impossible. We created a metric to rank the NFL's all-time best TD-throwing seasons.

Meet Class of 2016 - NFL players who graduated to stardom
From draft busts who hit their stride to quarterbacks who revitalized their game to rookies who performed like veterans, here are the players who earned the right to turn their tassels over.