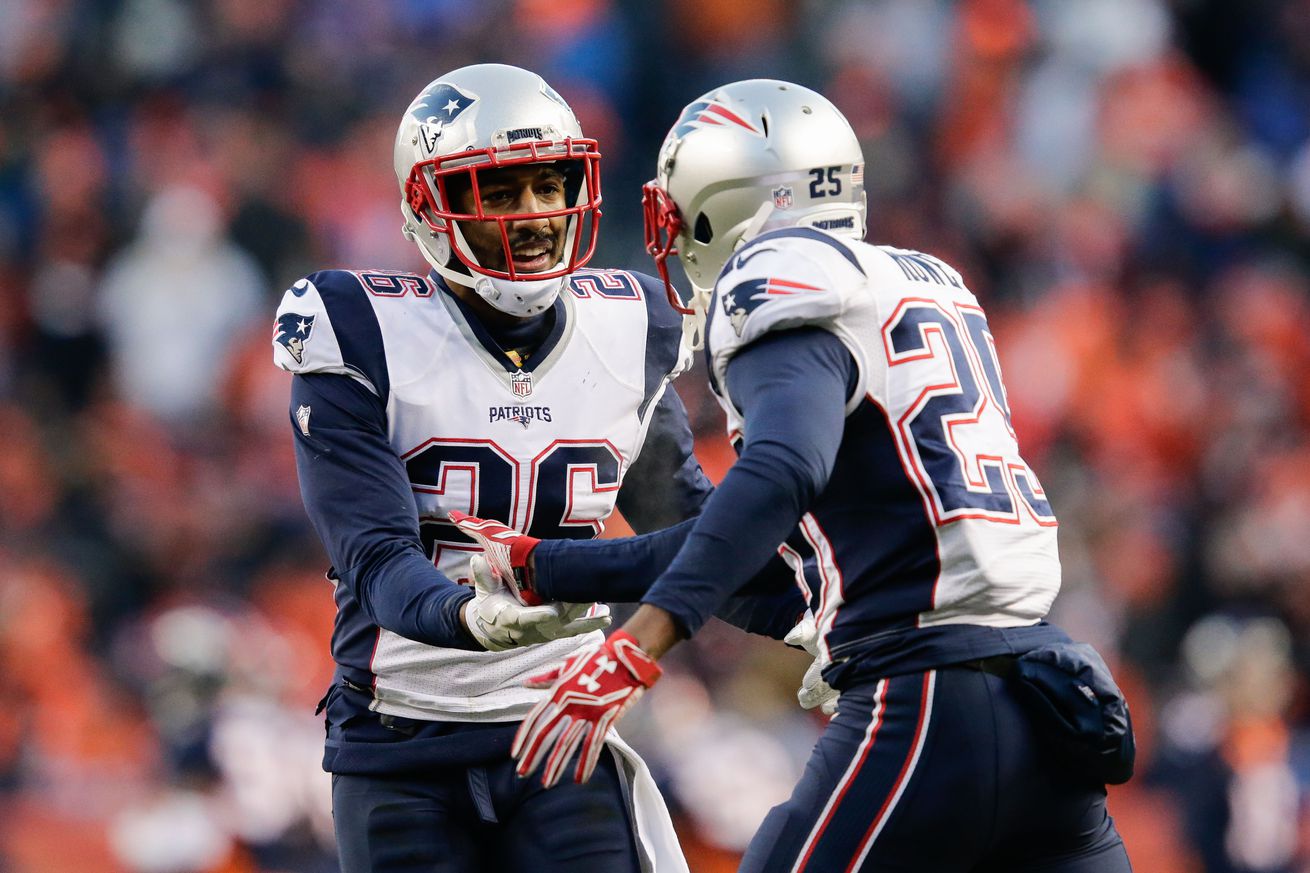 The Denver Broncos (8-6) have seen their playoff hopes basically vanish in 16-3 home defeat to the New England Patriots (12-2).

The Denver Broncos needed a win in the worst way this week against their AFC rival New England Patriots. In the frigid cold sub-18 degree weather, the game figured to be one conducting business as usual and the other desperate for a win.

Vechain Blockchain Technology Powers …
87 Ideas to Start a Side Hustle Busin…
Making a reusable produce bag using a…
My progress is my own business
World of Warships: Legends Review

On defense, the Broncos reminded Tom Brady that he doesn’t have good games in Denver for a reason. All game long, the defense did their job. Unfortunately, Trevor Siemian and the offense derp’d their way to a red zone turnover and complete ineptitude everywhere else.

This 16-3 blowout is entirely on the players on offense and now the playoffs are highly unlikely for the reigning Super Bowl champions.

The Broncos opened the game with six defensive backs in the hopes of keep Tom Brady’s options rather limited. It worked as the defense forced the Patriots into a three and out and a punt to Jordan Norwood.

Kalif Raymond was inexplicably deactivated for this game, which means Norwood would immediately muff his first punt and the Patriots recovered.

The defense would then force another three and out, but the good field position allowed New England to jump into an early lead.

The good news was, Tom Brady was 0/3 in two drives to start this game.

With their first offensive possession, Justin Forsett immediately gets involved with a first down run, but then Trevor Siemian made a throw behind Virgil Green that was broken up. Green was double covered on the play. After a solid six Yard run from Forsett, Siemian threw two yards short of the sticks to A.J. Derby for no gain and a punt.

The Broncos run defense was very active early in this game as they forced another third and long against Brady and the Patriots that they were unable to convert.

Forsett began to show that the run game might have been around for a while, but Devontae Booker just wasn’t seeing the running lanes. After a first down run, Siemian hit Green again for a near first down. On second and one, Siemian threw into what looked like triple coverage to Demaryius Thomas that was caught and turned upfield for a 23 yard gain. The pass was perfect.

A quick swing pass to Forsett netted another five yards to put the Broncos into the red zone. On third down, Siemian overthrew Booker in the end zone to force a Brandon McManus field goal attempt.

Dion Lewis gets the Patriots first first down of the day on his first carry on the next drive with a 14-yard gain and followed that run up with an eight yard gain. Another run and a holding penalty on the defense moved the Patriots beyond midfield.

From there the Broncos defenses stiffened to force another third and long. Brady missed another pass on a wheel route to end the drive. At this point in the game, Brady is 0/6 passing the ball.

Backed up near their own endzone has been a nightmare for the Broncos offensively, but not today. A quick toss outside and a run from Forsett inside get the Broncos out to their own 20 yard line.

On first down, Siemian made a great play just to get the ball away from a blitzing Logan Ryan that went incomplete. From there, Siemian attacked down the field to Jeff Heuerman to get the Broncos out past midfield.

Another quick pass to Heuerman for nine yards setup a short run from Booker to get another first down. A draw play to Booker picked up another five yards, then Siemian hit Thomas for the first down near the Patriots 20 yard line.

The Broncos had yet to convert a third down and ended the first quarter with a third and three situation.

Siemian threw off his back foot and this time Ryan was ready to jump the pass for the interception. Ryan returned it all the way to the Broncos 40 yard line. Not only did Siemian telegraph the pass, he had poor mechanics to add to the interception opportunity for Ryan.

Jared Crick made his presence known with a strip/sack on Brady. The fumble was recovered by the Patriots at midfield. Brady completed his first pass on the next play to Julian Edleman for a first down.

The Brady to Edleman connection started to heat up as two more completions between the two got them into the red zone. LaGarrette Blount would rush them into the end zone to convert the turnover into a touchdown.

Siemian was unfazed by the interception and began driving the Broncos down the field with two third down conversions and some big throws.

After a sack, Siemian was faced with a third and twelve and made a beautiful throw to Jordan Taylor to convert it and was looking red hot. Was.

A short run and an incompletion put Siemain into another third and long. This time, with nothing developing down field, Siemian hit Forsett short for a six yard loss and bounced the Broncos out of field goal range for a punt.

Trevor Siemian at this point was 15/21 for 153 yards, but three points is just not going to cut it. The Broncos red zone offense needs some work.

From their own eight yard line, the Patriots took to the ground to try to get another drive going. Tom Brady got his first third down conversion of the day on a four yard pass to James White on this drive.

They would convert another third down, just barely, out to their own thirty yard line to bring the game to the two-minute warning.

Derek Wolfe left for the locker room on this drive and unsurprisingly the Patriots run game picked up immediately afterwards. The Broncos defense came alive near midfield to end the Patriots drive.

Gary Kubiak, with well over a minute left in the half, decided his offense and Trevor Siemian isn’t good enough to move the ball into field goal range.

Andy Reid would be proud of Gary Kubiak's clock management there. He clearly has no faith in the #Broncos offense...

The crowd, rightly, booed this decision.

With a chance to get back on track, the Broncos immediately give up a sack and on third down Siemian makes a nice throw to Derby who dropped it for a nice three and out for Denver to start the second half.

Fortunately, the Broncos defense has some skills. After stuffing a first down run, Aqib Talib stopped a pass over the middle. On third down, Shane Ray blew through for the sack on Brady to end their drive.

Two runs from Forsett got the drive going in a good way, but a holding call on Russell Okung on the second one killed that momentum.

On second and 18, Siemian overthrew Thomas who could have made a catch had the ball been better placed that would have set up a third and manageable. Instead, Siemian would be faced with the impossible on third down and threw it short to Thomas for a ten yard gain and a punt.

After converting a third down in their opening series, the Patriots got things going with an 18 yard pass to Chris Hogan - the longest offensive play by the Patriots in the game to this point.

Just past midfield, faced with a third and five, Brady hit Edleman again for a big first down to the Broncos 29 yard line. The Broncos defense finally stiffened with a some significant pass rush on Brady from DeMarcus Ware to end the drive and force the field goal.

Siemian went deep on his first throw to Emmanuel Sanders that was caught, but the throw carried Sanders out of bounds. After a short run from Booker, Siemian on third and seven went deep the other way to Thomas who had the pass broken up. The throw was slightly underthrown, but completely catchable.

If the throw was on target, Thomas would not have had to slow down to try for the contested throw. If you want to look at it without any bias.

A three and out with the defense needing the offense to do something is completely appropriate for the 2016 Broncos.

Brady, on third and one, from his own nineteen yard line hit White for a big first down across the middle of the field. From there, the Patriots ground out yards to get past midfield. On third down, Hogan dropped the first down pass to end the drive.

The Broncos averaged 8.62 yards per passing play in the first quarter ... that pace has dropped to 2.69 yards in the last two quarters.

Needing a big drive from the offense, the Broncos promptly go three and out on their next drive.

Brady looked a bit rattled to start the next drive with two straight incompletions, but both were due to indecision from Brady and pressure from the Broncos defense. On third and ten, Brady hit White short and stopped by Todd Davis to force the punt.

Emmanuel Sanders finally got his first catch to start the next drive, with a seven yard drive. After a short run, Siemian would take a sack on third down back at their own five yard line to lead another three and out.

The Broncos have run 15 plays for 9 yards in the second half.

From here, the Broncos defense finally couldn’t keep the game at hand. And why should they? The offense is worse than its been in most of our lifetimes. The mulligan here shouldn’t go to Trevor Siemian, it should go to the Broncos defense.

Siemian opened things up with a nice pass to Derby for sixteen and then a twenty-one yard pass to Sanders to get the Broncos into Patriots territory.

After a batted pass, Siemian would take a sack to knock the Broncos back to the 45 yard line. On third and 15, Siemian threw off his back foot to Thomas. The throw was on the money and put the Broncos into a manageable 4th and 2. Siemian hit Thomas inside the 20 yard line, but was his hard in the midsection and dropped the ball.

The ball kind of floated on Trevor as Thomas was open for quite a while before the ball got to him.

That was the game, basically. Patriots would run the clock, Broncos would get nothing done.