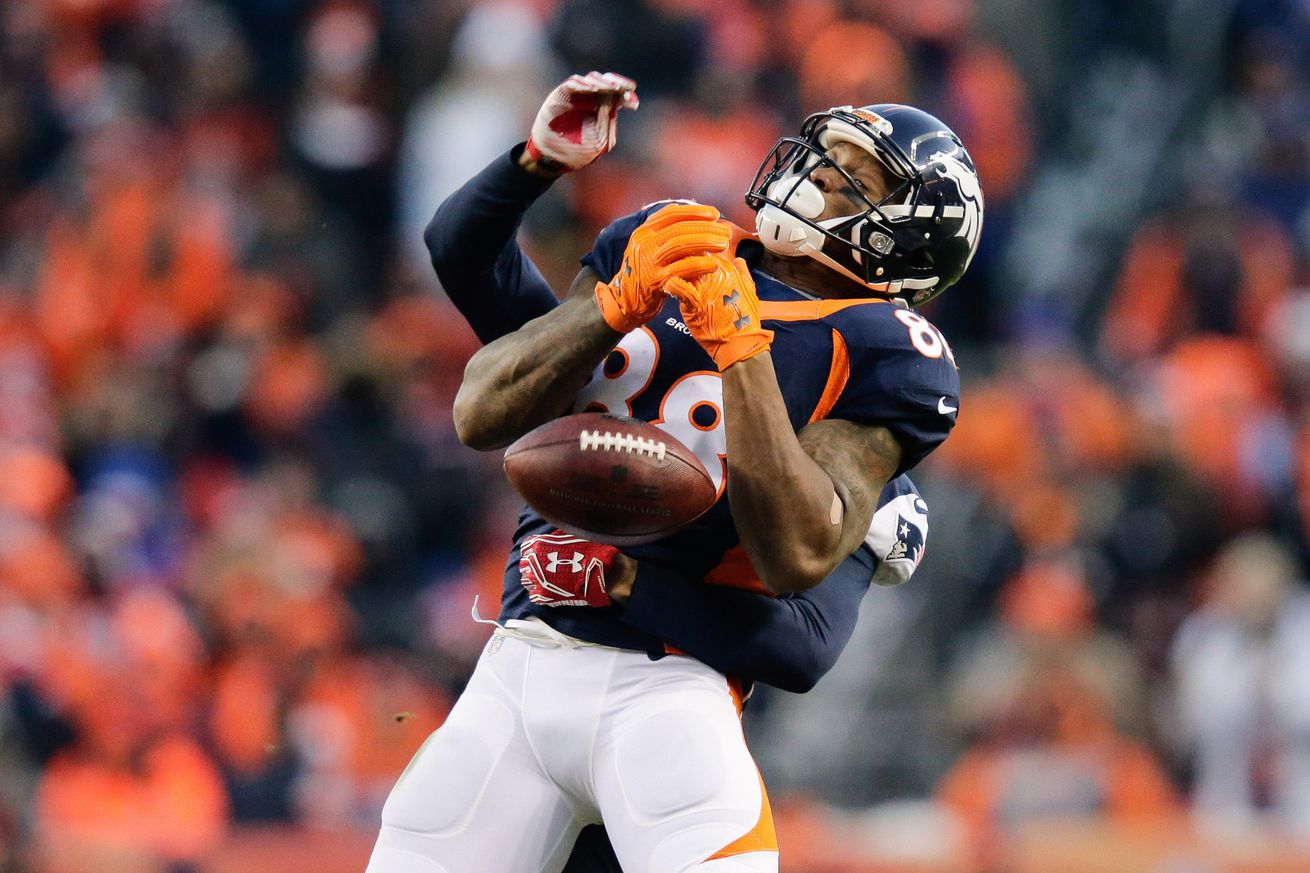 The Denver Broncos imploded offensively against the New England Patriots and lost at home by a score of 16-3. With an 8-6 record, it will take a miracle for them to make it to the post-season.

The Denver Broncos hosted the New England Patriots Sunday afternoon in their biggest game of the season.  While the defense played admirably and did their best to limit Tom Brady and the potent Patriots offense to only 16 points, the Broncos' offense must have not gotten the memo on the importance of this game.  As a unit, they were lackluster as usual and failed to do anything of note for the course of the game as the Broncos were defeated soundly by a score of 16-3.

The Patriots received the ball first to start the game, but the Broncos' defense did their job and made a statement early on forcing New England into a rare three-and-out on offense.  Denver was poised to have good field position, but Jordan Norwood muffed the ensuing punt, which resulted in a turnover and gave the Patriots the ball at Denver's 31 yard line.

With their backs against a wall, the vaunted Broncos' defense held strong once again and didn't allow the Patriots to convert a first down on the following drive. Stephen Gostkowski was able to connect with a 45 yard field goal to give New England a 3-0 lead with just over twelve minutes to go in the first quarter.

Trevor Siemian and the Broncos' offense took the field for the first time of the game and on their first play of the drive, registered a first down courtesy of a off tackle Justin Forsett run that was good for thirteen yards.  That was the most success they'd have the rest of the drive, as they quickly fizzled out and failed to convert on third down and were forced to send out Riley Dixon to punt the ball back to the Patriots.

For the third time in a row, the Broncos' defense was able to hold their ground and not give Tom Brady and the Patriots' offense anything to work with and promptly sent them off the field with another three-and-out series.  With the staunch play by the defense, the offense was able to feel that momentum and put together an eight yard drive that went for 55 yards and resulted in a 33 yard field goal by Brandon McManus to bring the game to a 3-3 tie.

After having no success through the air in their first three drives going up against the impeccable No Fly Zone, the Patriots switched it up on offense. They finally began to have some success against Denver's defense by rushing the ball with Dion Lewis, who was able to rip off some decent runs and register some first downs on their fourth possession of the game.  But once more, Denver's defense was able to come up big on third down and force the Patriots to their fourth punt of the first quarter.

Inspired by the play of their defense, the Broncos' offense finally started to come alive.  Led by Trevor Siemian, the team put together an impressive ten yard drive that went the length of the field, but on the drive's eleventh play, Siemian threw a poor ball to Emmanuel Sanders that was intercepted by Logan Ryan.  Ryan could have gone the distance if it wasn't for Demaryius Thomas who tracked him down and tackled him inside Denver territory.

The interception turned out to be a disaster and the Broncos' defense finally showed vulnerability and the Patriots were able to take advantage of the turnover and go the distance, capping off a seven play, 46 yard drive with a one-yard touchdown run by Legarrette Blount, putting New England up 10-3. That score was his fifteenth of the year and solidified himself atop the Patriots' record books for the most touchdowns by a running back in a single season.

On the next drive, the Broncos marched down the field again and were within striking distance of a score, but opted to punt on fourth and fourteen on the 37 yard line instead of attempting a long distance field goal with McManus in cold conditions. The Patriots were stopped with just over a minute to go in the first half, but the Broncos didn't use any of their three time outs to keep more time on the clock and were content to go into halftime down by only seven points.

The Broncos offense reverted back to their usual lack of efficacy and struggled immensely in the opening part of the third quarter. They failed to get a first down on their two first drives of the second half and put the defense in tough positions.  On their second drive of the second half, New England was able to net another three points on the scoreboard thanks to a 40 yard Gostkowski field goal with a little over five minutes to go in the third quarter.

The Broncos' offense tried to get the ball rolling with their third possession of the second half and on third down, Siemian unloaded a well-thrown bomb down the left sideline to Thomas, alas, he ended up dropping it. Once again, the Broncos offense failed to get a first down, which was their third straight drive that resulted in a three and out.

The Patriots had the ball in the final moments of the third quarter and in the beginning stages of the fourth quarter, but thanks to the stout play of the Broncos' defense, Denver's offense was able to get the ball back with twelve and a half minutes to go in regulation.

It didn't matter, because the offense did what it does best — suck.  Another drive, another three and out.  Rinse, repeat.  It's exhausting to have to watch this poor play weekly, but it's even worse having to type the same words over and over again. The Patriots were given good field position and on their next possession, they were able to notch another field goal and extend their lead to 16-3 with eight minutes to go in the game.

As the final minutes of the game came to a close, the Broncos weren't able to do anything to get them out of the hole they had put themselves in.  A tragic performance indeed.  A winnable game that the Broncos fumbled away because they lack the talent, creativity and play-calling on offense to make things work.  I'll leave you all with this final quote that sums up how a majority of us feel about the state of the franchise we love right now and will provide a rant about the future of the team in my quick hits section.

This @broncos offense is neither effective NOR entertaining. It's a grind, it's annoying watching this week after week. #broncos

It might not be a popular opinion, but given the Broncos' woeful play offensively and issues on the trenches on both sides of the ball, I'd rather see the Broncos lose out against the Chiefs and Raiders as opposed to winning any of the next two contests. This team needs a wake-up call.  It needs an entire revamp on the offensive side of the ball.  The only player on the offensive line worth a hoot is Matt Paradis, the rest of them are unfit to be starters in the NFL.

Furthermore, they also lack firepower and talent at tight end, running back and receiver. The front office has tried to upgrade these positions in the draft and free agency over the past few seasons, but have gotten few positive results.  Cody Latimer is a bust.  Jeff Heuerman is on his way to becoming a bust.  Ronnie Hillman never panned out. Montee Ball punched his way out of Denver.  The list goes on and on.  Simply unacceptable.

Free agency and in particular the draft should be used to bolster all of these issues. Unfortunately, the Broncos haven't been able to draft well at all in regard to offense and I don't have much faith that they'll improve their scouting and evaluation talents given the history there.

There needs to be some major changes in the teams' coaching ranks as well. Offensively, the team seems unprepared and out-coached on a regular basis. I'd be surprised if John Elway is content with what he has seen transpire over the last several weeks of the year and remains satisfied with the status quo.  I'd expect big moves to be made in regard to all the aforementioned discourse, if not, then Elway needs to seriously reconsider his position at Dove Valley.

What is going on right now with the Broncos is simply unacceptable, and it is up to Elway to help fix the mess that in a way, he has helped create by failing continuously on draft selections and not taking a serious approach to improving areas that are devoid of talent on the roster for several seasons.

I look forward to seeing the Broncos lose out and end the season at 8-8.  I certainly hope the teams behind us in the playoff chase win games because right now, all I care about is the team getting a higher draft pick in hopes to get the best talent possible in this years' draft.  Maybe that's expecting too much, because outside a handful of selections in Elway's tenure as GM, they have done a poor job finding players who can make a difference there anyways.