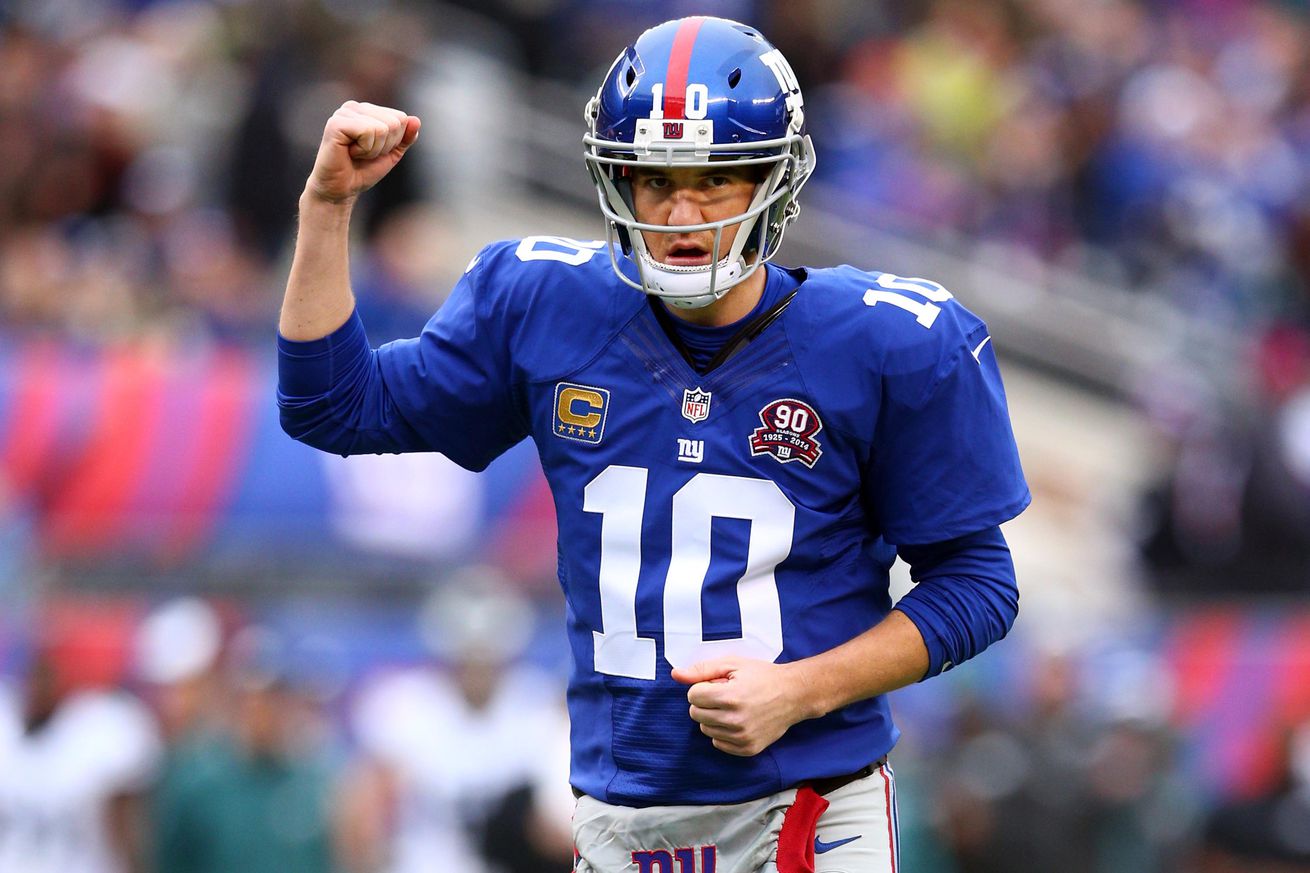 NFL Insiders think Eli Manning is one of the 10 best quarterbacks in the league, but are they still selling him short?

Even with training camp in full swing and actual (albeit preseason) football just a couple sleeps away, ESPN just won’t quit with these rankings. This time they are ranking 33 NFL quarterbacks (Insider content).

They broke the 33 quarterbacks up into five different tiers:

Tier 1: Can carry his team each week. Team wins because of him.

Tier 2: Can carry team sometimes but not as consistently.

Tier 4: Might not want this guy starting all 16 games.

Tier 5: Do not think this guy should be starting.

So then, how do people in the NFL view the Giants' signal caller?

One head coach on Eli Manning: "He has lost a little off his fastball, but in this system, I think he could be a 1."

Manning's 65 TD passes over the past two seasons rank third in the NFL behind Brady and Rodgers, who have 69 apiece. Manning has thrown nearly as many interceptions over that span (28) as Rodgers and Brady combined (29), but there's no question he's enjoying a revival.

"I've seen him be just elite and I've seen him kind of be Eli at times, but still, he has won a couple championships," a defensive coordinator said. "He is really bad at times and you scratch your head. He has taken his team from the kickoff and won and he has also come from behind to win. He came from behind against Carolina last season."

Manning piled up 10 TDs with one INT during wild games against the Panthers and New Orleans last season. He led the Giants back from a 28-point deficit in the third quarter against Carolina, tying the score in the final two minutes. Down 14 in the fourth quarter at New Orleans, Manning led the Giants into the lead.

"They kept Ben McAdoo and that lets Eli grow another year in that system that is completely different from anything Kevin Gilbride ran," an offensive coordinator said. "I think Eli is only bound to get better. Having a healthy [Victor] Cruz and then Odell Beckham Jr. having another year in the system, that should get better and better."

Teams with defenses as bad as the Giants' D has been recently almost never contend. Manning has proved he can excel in championship situations if the Giants can get him there.

"I think he is the kind of guy that if he gets to the playoffs, his give-a-crap factor is so low that he ends up just getting it done," a head coach said.

Can anyone really disagree with ranking Manning as the ninth-best quarterback in the league? Given what we’ve seen from him, and the Giants over the last few years, it isn’t an unfair rating.

I do think you could make the argument that he is still underrated — so I will.

There isn’t a quarterback in the league that can win regardless of the talent around him (including the recently retired Peyton Manning). Brady has looked remarkably human without Rob Gronkowski and Aaron Rodgers had the worst season of his career as a starter without Jordy Nelson.

Likewise, I think we are only now seeing the kind of quarterback play of which Manning is truly capable. He spent most of his career in an offense that could be almost unstoppable, but also incredibly unstable. Both it’s strength and weakness were based on the fact that little was defined until after the snap. The nature of that offense both helped Eli carry the team to it’s latest championship, and also lead the league in interceptions and make what would appear to be head-scratching mistakes.

But now we are seeing Manning in a truly quarterback-friendly offense that plays to his strengths, and he is undergoing what is being called a career resurgence. Perhaps with mastery of the offense, a young corps of receivers who should be here for a long time, an improving offensive line, and a rebuilt defense, Eli will move up the list some more.

Elsewhere in NFC East, Tony Romo is the 11th-ranked quarterback. Neither Kirk Cousins nor whoever will be the starting quarterback for the Philadelphia Eagles are in the top 18.

Everything You Need To Know About Amcrest IP Cameras