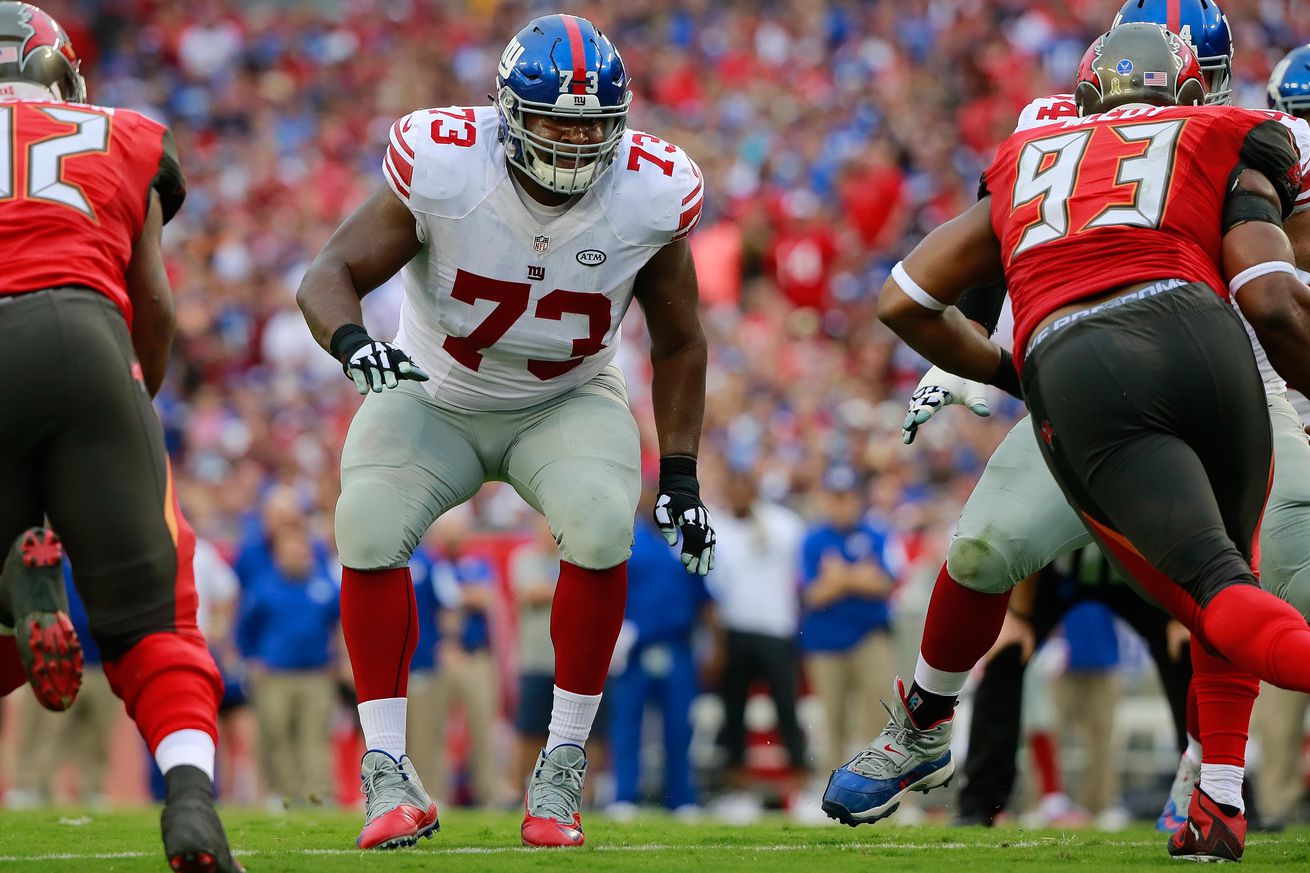 No matter what team Newhouse plays for, fans seem to end up wishing he was on someone else's team.

Marshall Newhouse. His mere names causes a collective shudder across much of the New York Giants fan base. Giants fans aren't the first ones to react that way. Newhouse was also found wanting, and was eventually unwanted, during NFL stops with the Green Bay Packers (2010-2014) and Cincinnati Bengals (2015).

Newhouse, though, continues to find jobs. And playing time. A 2010 fifth-round pick by the Packers, he has now played in 76 regular-season games, starting 50 at either left or right Tackle. Newhouse doesn't live with blinders on. He is aware of what is written about him in the media and said about him by the fan base. He told NJ Advance Media this spring that he isn't bothered by it.

Drafted in the fifth round of the 2010 NFL Draft, Newhouse was inactive all season before being placed on IR near the end of the year. He started 13 games at left and right tackle in 2011, started all 16 games at left tackle in 2012, then lost his job in 2013, when he started only two games. Green Bay, incidentally, went 24-7 in the 31 regular-season games Newhouse did start.

SB Nation's Acme Packing Company referred to Newhouse as "one of the favorite whipping boys of Green Bay Packers fans" when he became a free agent before the 2014 season. APC pointed out that Newhouse was the worst-rated tackle in the league in 2011, per Pro Football Focus. Per APC, Newhouse's career summary with the Packers:

When he signed with the Cincinnati Bengals, the Milwaukee Journal-Sentinel wrote that "The Packers probably had little or no interest in re-signing Newhouse because his career had reached a dead end in Green Bay and they have depth at tackle."

Evan "Tex" Western of Acme Packing Company had this to say when I asked him for thoughts on Newhouse's time withe the Packers:

Marshall Newhouse's time in Green Bay was relatively brief, but ended up as quite the roller-coaster ride. The former Packer was thrust into a starting role in 2011, his second NFL season, due to an injury to left tackle Chad Clifton. He then kept the left tackle job in 2012, in large part due to a lack of other options at the position. When the team started a pair of rookies ahead of Newhouse in 2013, his fate in Green and Gold was sealed. 4th-round pick David Bakhtiari got the left tackle job in camp after Bryan Bulaga tore his ACL, while undrafted rookie Don Barclay beat out Newhouse for the starting job on the right; that spelled Newhouse's departure as a free agent the following spring.

Still, Newhouse has some redeeming qualities. He played reasonably well as a backup in 2013, mostly on the right side. In hindsight, right tackle was probably always the better position for him, and the Packers might have been better off moving Bulaga to left tackle in 2011 rather than waiting until 2013 to do so. Furthermore, Newhouse is a professional, and is by all accounts a class act and a hard worker. Based on his time in Green Bay, his best fit would be on a team needing a veteran player to back up some young linemen and help out as a spot starter. If you need him to start, definitely put him at right tackle.

A year in Cincinnati

The Bengals signed Newhouse to a one-year deal for the 2014 season. He moved into the starting lineup after seven games. Disenchanted, the Bengals benched Newhouse after five games.

When he became a free agent after the season, ESPN said "the backup struggled most of the season when he relieved [Andre] Smith. It got so bad that the Bengals went out and signed veteran Eric Winston, who ultimately ended up starting ahead of Newhouse."

Newhouse is, despite the criticism he gets, a friendly guy. He is well-spoken. Here is what he told me prior to the 2015 season about his career to that point:

"I have high standards for myself, I always have. There are definitely times when I didn't play up to my standards. and the team's standards." Newhouse said. "At the same time I was on good teams and I was a big part of helping teams win a lot of games.

"I know I'm an asset. I know that I'm better than I was. That's just the maturity part of playing football. Guys who assert themselves can definitely improve, and I feel like I'm on that track."

The Giants signed Newhouse to a two-year, $3 million contract. Then-offensive coordinator Ben McAdoo was familiar with Newhouse from their time together in Green Bay, which meant Newhouse already knew the offense. He was a veteran player with experience at both tackle spots. That made him the perfect "swing tackle," a veteran player who might not be great but knew what he was doing and could play on either side in an emergency.

Newhouse, entering his fifth NFL season, wasn't supposed to play. He was supposed to watch Will Beatty play left tackle and rookie first-round pick Ereck Flowers play right tackle. Unfortunately, the emergency before the Giants ever hit the practice field, with Beatty suffering a torn pectoral while lifting weights. That pushed Flowers to the left side and Newhouse into the lineup on the right. The emergency also lasted longer than anyone imagined. Beatty was expected to return after eight games, but he never made it back. That meant Newhouse played the right side all season, which was never the plan. It is also a big part of the reason Beatty is no longer a Giant, which is a story for another time and place.

The results were predictable. The Giants had to play around the deficiencies of their offensive tackles much of the time in 2015. Flowers, as nearly all rookie left tackles do, struggled mightily. He battled, playing valiantly much of the year on a bum ankle, but the results weren't great.

Newhouse? Well, he played the way he has played throughout his career. Which means he showed why he is better-suited to be a short-term fill in than a full-time starter. The PFF numbers:

As much as Pro Football Focus hates his work and Giants fans would love to see the team drop him like a bad habit, Newhouse did one good thing for the team in 2015. He stayed reasonably healthy, starting 14 of 16 games. That's more than Beatty did. Or Geoff Schwartz. Or Brett Jones. If that hadn't been the case, the Giants could have ended up with Emmett Cleary playing right tackle, or Pugh moving out to right tackle while someone like Dallas Reynolds tried to play guard. While Pugh, obviously, could handle right tackle those scenarios are even less desirable than Newhouse starting games.

Right now, Newhouse remains the starting right tackle for your New York Giants. The fan base has a problem with that. Newhouse's teammates do not.

"Marshall's a great player. He's been in this system and he knows how to play in this system ... I'm very, very confident in Marshall as our right tackle. He's a helluva player," said Justin Pugh.

"Everyone wants to try to get on the right side of the line, but I have no worries whatsoever. I know what those [Newhouse and John Jerry] guys bring to the table."

"I really like the guys we have in our room and I think the fact that it stayed consistent personnel-wise says something about the group we have, and I think guys believe that we can do some really great things together, and it is just going to take that consistency, being out there as much as possible with that same group."

The Giants don't appear to be believe they have anyone on the roster who is an upgrade from Newhouse. Second-year man Bobby Hart practiced almost exclusively with the second team in the spring and does not appear to be a legitimate candidate to start. Byron Stingily was hurt all spring. Emmett Cleary was playing inside at guard.

The Giants' efforts in free agency have been well-documented. They missed out on Russell Okung and Donald Penn. As of now, they have been unable to sign Eugene Monroe. If not Monroe, the Giants still may find a replacement on the free-agent scrap heap or among players cut during the preseason.