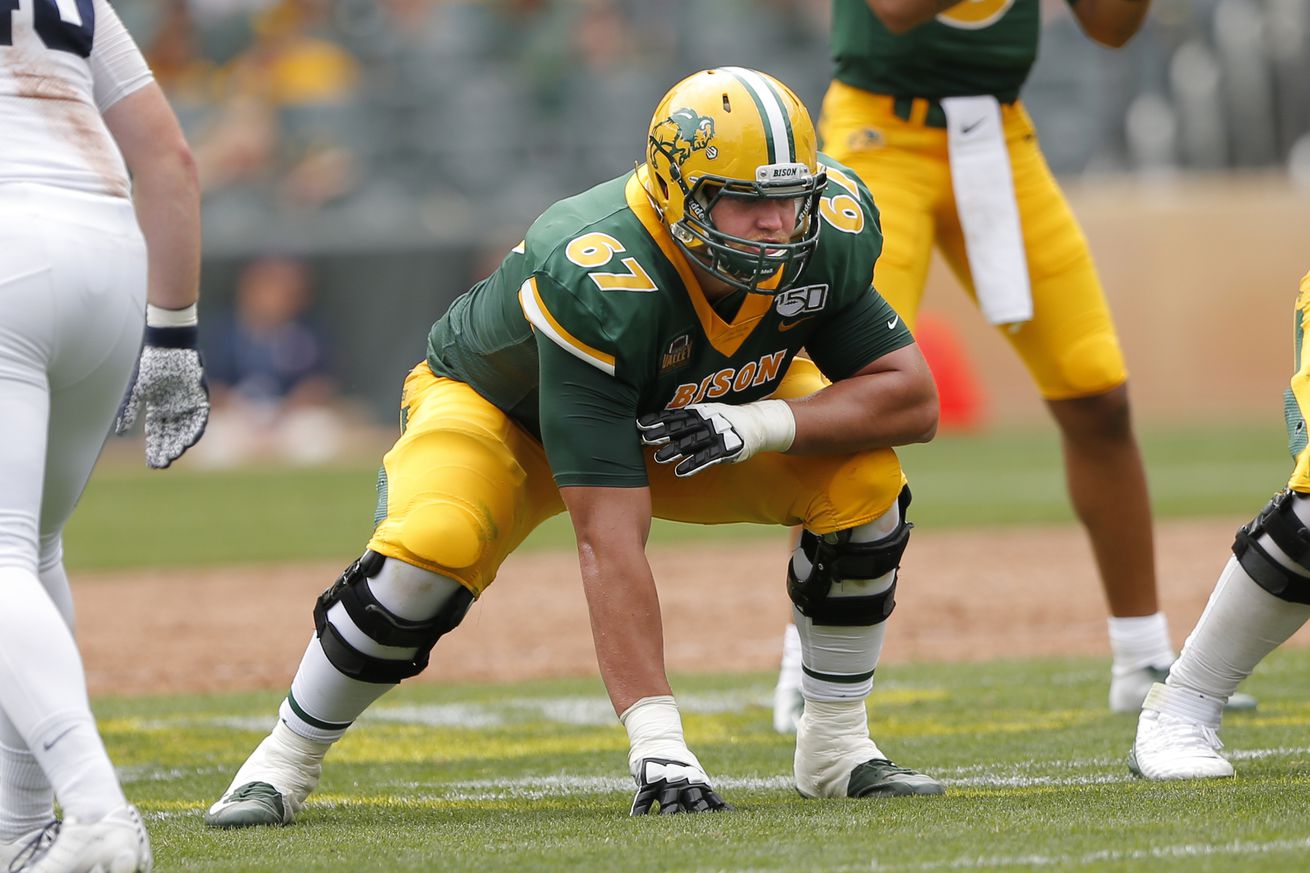 Could Volson lock down one of the open spots on the Giants’ offensive line?

It always happens that top prospects from the big schools get the most attention at the start. They’re often the most physically impressive players and they’re certainly the prospects with the most exposure.

Over the course of the Draft Process, however, smaller school prospects are uncovered and given a chance to shine. That often happens at the All Star games and NFL Scouting Combine. Every year there are players who seemingly come out of nowhere to rocket up draft boards and get drafted earlier than anyone would expect — and go on to play well in the NFL.

This year that might be offensive lineman Cordell Volson from North Dakota State University. Volson is an experienced starter for the Bison, playing right Tackle, left guard, and right guard over the course of his college career. He’s an athletic, nasty blocker who has played no small part in NDSU’s continued dominance over the FCS.

And he could be a real small-school find for a team like the New York Giants who need help just about everywhere on their offensive line.

Cordell Volson of North Dakota State University is an experienced, powerful, and versatile offensive line prospect with the potential to play a variety of positions at the NFL level.

Volson has started 41 games for the Bison, playing right tackle, left guard, and right guard over his time there. He has, at times, moved from the edge to an interior position mid-game and done so without issues. Volson has a versatile frame, listed at 6-foot-7, 313 pounds and plays with very good leverage to mitigate his height when playing guard. He is a natural knee bender who plays with good hip and pad level to settle into his stance and sit into his sets.

Volson does a good job of firing out of his stance when run blocking and consistently creates movement along the line of scrimmage. He keeps good leverage throughout the rep and is able to uncoil his hips and explode into defenders. Volson also has the athleticism and lateral agility to be an effective zone blocker, pulling guard, working to the second level, or getting out into space on screen plays.

He has good lateral agility to mirror speed rushers on the interior, as well as plenty of strength to anchor against power rushers. He shows good football intelligence in understanding the blocking scheme from multiple positions and is capable of picking up late pressure.

Volson has great competitive toughness and plays with a definite mean streak. He routinely drives defenders 5 or 10 yards downfield and tries to leave defenders on the turf with pancake blocks. Volson gives consistent effort on every play and is always looking for work when he isn’t actively blocking.

While Volson is also a capable pass protector on the edge at (right) tackle, though his kick-slide is a bit choppy and he can struggle with speed off the edge. Likewise he can occasionally lose his balance and wind up on the turf. Volson will also need to work on his discipline with hand placement. He has very heavy hands, but they can be wild and wind up outside defenders’ frameworks. That could draw holding penalties at the NFL level, particularly against NFL caliber athletes and technicians.

Cordell Volson projects as a starting guard at the NFL level with the potential to play tackle as well.

His experience at both left and right tackle gives him good versatility to compete for a starting job right away and fit in wherever teams have openings. Volson might be able to play tackle as well at the NFL level, but he will need to improve his footspeed and kick-slide. As it stands now, Volson should at least be able to give an NFL team depth at right tackle* and fill in there in a pinch.

*I specify right tackle due to his experience at the position. I don’t differentiate between left and right tackles from an athletic standpoint.

Volson should be pretty scheme diverse as a guard prospect, and can play in any but the most athletically demanding blocking schemes. He’s at his best playing downhill in a man-gap power run game, but is perfectly capable of stressing defenses laterally as a zone blocker.

As with (almost) all prospects, he does need some development, and Volson will need to improve the consistency of his hand placement as well as his foot speed. He can let his hands get wild at times and slip into almost bear-hugging defenders. That has the potential to translate into frequent holds as he gets used to dealing with NFL-caliber speed and power at the next level. That said, coaches will likely fall in love with Volson’s mean streak and the effort he gives on every play.

Small school prospects face an uphill battle compared to prospects from powerhouse football factories. However, Volson has the traits to see his profile rise significantly over the draft process.