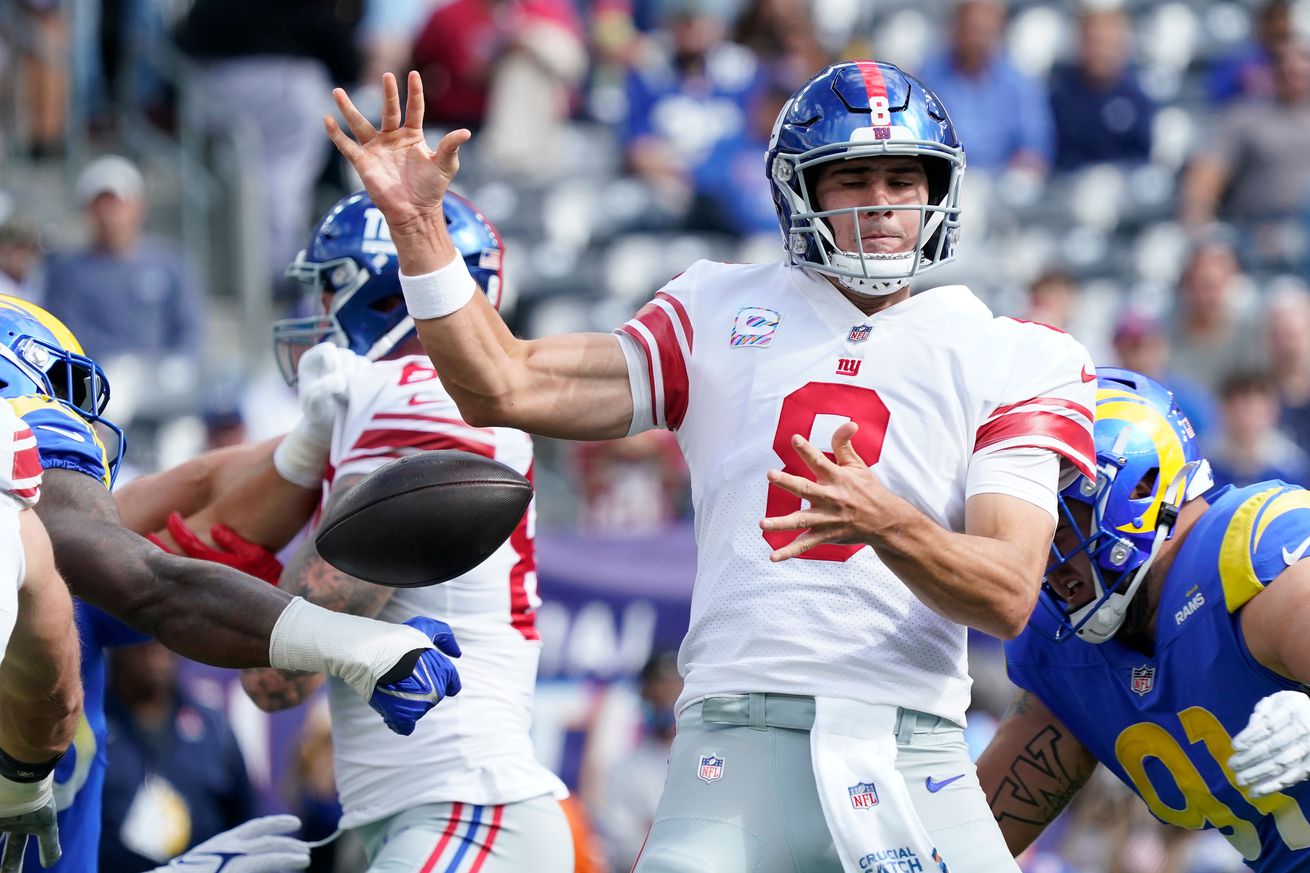 When you think it can’t get worse for the Giants, you are somehow always wrong

I think the New York Giants are challenging my creativity. I keep thinking they can’t look worse. That the games can’t look uglier. That there has to be a bottom to this pit of miserable football they have fallen into. I keep looking for new ways to explain it when it does continue to get worse. I am running out of ideas.

MetLife Stadium was probably half-full when the game started. By game’s end there were only a few thousand fans Left. Why the ones remaining were torturing themselves, I have no idea.

This one was so bad, the Giants made such a pitiful showing in a non-competitive 27-point loss, that Rams coach Sean McVay was ticked off. At his own team. For not embarrassing the home-standing Giants by even more.

Despite win, McVay is visibly, audibly bothered by penalties and slow starts on offense, and with his own calls/grasp of game flow. Says he doesn’t want to keep repeating those things week after week.

I know that McVay’s “anger” was just for show. Honestly, though, I wish we would see some of that from Judge. I know he doesn’t want to rip players. I know he wants to build guys up and not tear them down. I know. I know. I know.

Yet, I get tired of quotes like the one you are about to read. Because when you don’t see tangible signs of anything getting better they become empty words.

‘Our goal is to get better as a team as the season progresses. That goal doesn’t change,” Judge said Sunday evening. “There’s a lot of ball left to be played. There’s a lot of ball left to be played. We’re in Week 6, so to turn around and start tapping out now – I don’t know what kind of mentality other people have, I don’t quit things, these players don’t quit things. We’re not going to do that, so anyone who’s got that mentality of woe is me, what did you think was going to happen? Did you just think you were going out there, roll the ball out and walk over every opponent? It’s the National Football League, teams are good. You’ve got to play better than them in those 60 minutes every Sunday to have success.”

Where are the signs that anything is getting better?

The Giants couldn’t block the Rams, which started on the first play when Leoanrd Flody blew past Nate Solder for a strip-sack of Jones. Arguably, the best offensive players they had left when the game started were Kadarius Toney and Andrew Thomas. They couldn’t keep them on the field as both left with injuries. They couldn’t cover Rams’ wide receivers. Daniel Jones couldn’t throw straight, hold the ball, or find the guys in the white shirts. Maybe he was confused because the Giants, apparently trying to honor the 2011 Super Bowl team that was feted at halftime, wore their road white jerseys. The Rams were in blue, which the Giants usually wear at home.

Things were so ridiculous in the second quarter that at one point Matthew Stafford dropped a shotgun snap, still managed to complete a bubble screen to Cooper Kupp, then watched the play go for 25 yards as Giants’ defensive backs Julian Love and Xavier McKinney tackled each other and Kupp ran free.

C.J. Board’s reward for a 37-yard kickoff return? A broken arm that will probably cost him the rest of the season.

This can’t all about injuries

OK. Let’s be realistic here. Saquon Barkley didn’t play. Kenny Golladay didn’t play. Darius Slayton didn’t play. Toney and Thomas were out of the game before they could truly make a difference. C.J. Board got hurt, probably ending his season. Blake Martinez, Nick Gates, Shane Lemieux and Rodarius Williams are already done for 2021.

“I have faith in the guys on our roster. Whoever’s at the game, you’ve got to produce. That’s it,” head coach Joe Judge said. “It’s what we practice for all week. When you come to the game, you’re a professional, you’re expected to go out there and produce.”

Next man up and all that. It’s all well and good. But, Dante Pettis isn’t Toney. Collin Johnson isn’t Golladay. Reggie Ragland isn’t Martinez. Without Thomas, the Giants might not have one starting-caliber NFL offensive tackle.

Still, I don’t think what we saw Sunday can be all about injuries. Can it?

Not when Rams’ receivers were running free all over the field. Not when the Giants couldn’t stop the run, giving up 131 rushing yards. Not when they couldn’t convert on third- and fourth-and-1 situations in the second quarter when the game wasn’t yet a blowout, using a quarterback sneak and a halfback dive with all-world defensive tackle Aaron Donald in the middle of the LA defense.

Let’s dive into more ‘things I think’ after the latest Giants’ debacle.

Thomas is playing really well. That’s about the only nice thing you can say about the Giants’ offensive line after Sunday.

Remember all that stuff I wrote about second-year offensive tackle Matt Peart needing to play? Well, maybe not.

The 2020 third-round pick got to play most of the game on Sunday, and was pretty abominable. He played a few snaps at right tackle when Nate Solder briefly left game. He played most of the game at left tackle after Thomas added an ankle injury to his foot woes. He was beaten badly for two sacks while at left tackle, one resulting in a strip-sack of Daniel at the Giants’ 12-yard line. Peart spent way too much time running after defenders who had blown past him.

Solder, 33, surrendered eight pressures last week vs. Dallas. He wasn’t much better on Sunday. The game started with Solder getting beaten for a strip-sack by Leonard Floyd. The Giants temporarily held off the inevitable beating by actually recovering that one.

The Giants were unable to run the ball when it mattered. With their tackle situation, and with in-season free agent signee Matt Skura and former Washington Football Team practice squad player Wes Martin at left guard that can’t be a surprise.

Even Korey Cunningham, elevated from the practice squad got a series. Predictably, it looked like he was responsible for surrendering a sack while stationed at right tackle.

Daniel Jones sneaking on a fourth-and-1? Two days after clearing concussion protocol? Devontae Booker up the middle on a third-and-1? Those are about as standard and conservative as you can get on short-yardage play calls. Which, honestly, make no sense when your offensive line is being manhandled by the Los Angeles defensive front. Yet, those were the calls on two first-half short-yardage plays. Both, to no one’s surprise, failed.

When you have a quality offensive line and you are the better team, you might be able to get away with those vanilla “here we come, try to stop us” play calls. When the opponent is clearly better and your offensive line is in shambles you need to be more creative than that.

After all of the times I have disagreed with Judge for not going for a first down on fourth-and-short inside the opponents’ 40-yard line, I think I was flabbergasted to see him leave the offense on the field on fourth-and-1 at the Giants 41-yard line with a 3-0 lead late in the first quarter.

The Rams stopped Jones on a quarterback sneak, then proceeded to reel off touchdowns on four of five possessions to blow the game open by halftime.

The analytics on this one were iffy, not being definitive either way. I just didn’t understand the choice here, especially considering how conservative Judge has been in these situations thus far in his coaching tenure. I would have loved this call from the Rams’ 41-yard line, but not from the Giants’ side of the field.

Recommendation : Toss-up (+1 WP)
Actual play: D.Jones up the middle to NYG 41 for no gain (T.Reeder). pic.twitter.com/jA7SFLvcGB

I felt bad for Daniel Jones

I think Judge’s explanation that “We’re going to compete for 60 minutes” when asked why Daniel Jones was still in the game at the end is tone deaf. Jones suffered a concussion just a week ago. This game was over when the fourth quarter started. The Rams emptied their bench throughout the final 15 minutes.

Jones threw three interceptions. He obviously had little chemistry with Dante Pettis. He was off target much of the day and made some bad decisions. I can’t kill the guy, though. He really had no chance to succeed with the JV receiving corps out there and Ram rushers in his grill all day.

Giants’ defensive end Leonard Williams wasn’t happy that fans booed the Giants on Sunday. I think this is one time a player should have kept his true feelings to himself.

“They do bother me honestly. Obviously, we’re in our own home stadium. I don’t want to be hearing boos from my own fans. I understand that they have a right to be upset as well because they’re coming to see us put good football on the field. We haven’t been winning up to date. But at the same time, I don’t know, I don’t like that,” Williams said.

“I don’t think anyone deserves to be put down no matter who you are. I’m not going to go to a salesman and tell him that he’s not a good person or ‘boo’ this person because he’s not doing his job or something like that.”

Oh, Leonard. Yeah, I get it. Your feelings are hurt. But, you have a nice, fat three-year, $63 million contract to curl up in when you go to sleep at night.

What do you expect fans to do? They pay a ton of their hard-earned money to sit in the stadium. They have watched a miserable product for the better part of a decade. The Giants are 17-51, the worst record in football since 2017.

Sorry, but I’m not sorry that the fans who were optimistic enough to show up let you and your teammates know they aren’t happy with the product they are paying to watch. Give fans a reason not to boo, they won’t.

The Giants need to be sellers

The NFL trade deadline is Nov 2, just a couple of weeks away. I think it’s obvious the Giants need to be sellers. Evan Engram and Jabrill Peppers, in the last years of their contracts, are obvious trade candidates. Maybe James Bradberry, with a $21.863 million cap hit next season, and Darius Slayton, too.