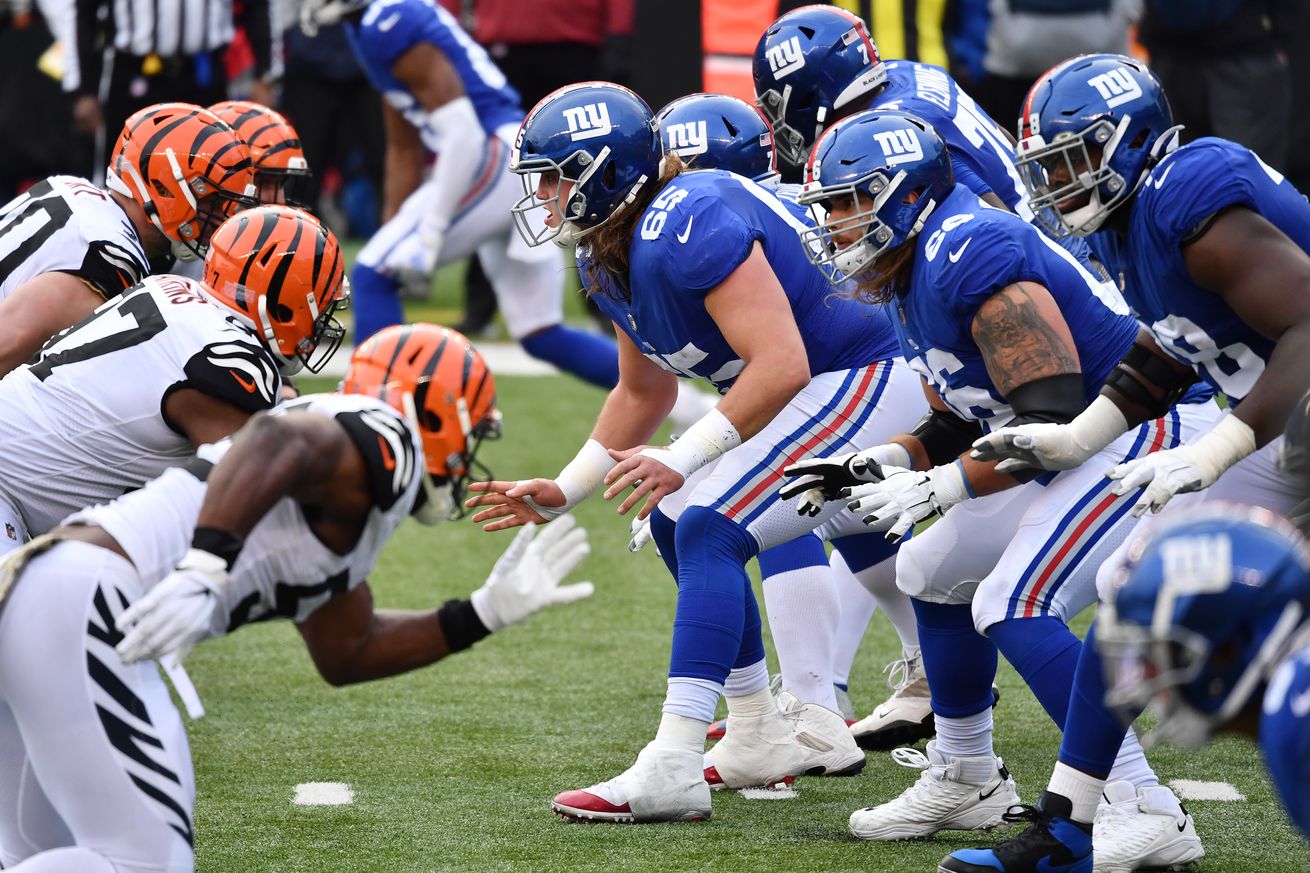 Young Offensive line dealt with a lot of adversity in 2020

The 2020 season was a difficult one for the New York Giants offensive line.

The starting left Tackle opted out of the season due to the COVID-19 pandemic. That meant rookie left tackle Andrew Thomas had to play that spot.

How to Declutter and Live in a Clean …
Thor, the archetype of the epic hero …
Homebuyers anticipate lockdown exit a…
Seal Shore campsite
Never Underestimate the Furry Fandom

Rather than draft a center or sign one in free agency, the Giants chose to convert Nick Gates to the position. Ultimately, that proved to be a terrific decision. It contributed, though, to a rough beginning.

The pandemic wrecked a much-needed offseason as the Giants adjusted to a new scheme and new players. They won’t admit it, but the Giants were ill-prepared at the beginning of the season to face some of the league’s best defensive fronts.

Despite all of that, the news about the offensive line might be better than the end of season metrics indicate. The Giants do appear to have several ascending players worth going forward with on their offensive line, a better position than they have been in over the past few seasons.

“We’ve got some really nice, young pieces. Nick Gates stepped in there. He’d never played offensive center before. We drafted Will (Hernandez) and Shane Lemieux. You have (Kevin) Zeitler and Andrew Thomas who acquitted himself very well when he had that rough patch and then he got himself rolling again,” GM Dave Gettleman said in his end-of-season videoconference. “I think this offensive line can compete. You can cherry pick here, cherry pick there, in terms of which game you want to pick and how the offense did. The offensive line showed very good progress. They’re big, they’re young, they’re strong and they’re tough and smart. This O-Line has a chance to be pretty damn good.”

Let’s look at those pieces Gettleman was talking about.

Look at the raw statistics and the selection of Andrew Thomas with the fourth overall pick in the 2020 NFL Draft looks like a misstep by the Giants.

There is much to like about Thomas. After an abominable start during which he allowed 36 pressures, including five sacks, over seven games, the rookie was much better over the final nine games. He allowed five more sacks, but only 21 total pressures over that season-ending nine-game span.

Thomas, the youngest player on the Giants’ roster in 2020 at the age of 21, handled a difficult season that featured a switch in offensive line coaches, with maturity.

He said in a season-ending videoconference that he is “running my own race” and not worried about comparisons to Becton or the other tackles in his draft class.

Thomas also made it clear that he has not lost confidence and believes he can play well at the NFL level.

“If you know who you are, know what you bring to the table then it’ll all eventually come out.”

The Giants hope the player they saw throughout most of the second half of the 2020 season is the one they get going forward, and that he eventually proves their decision to make him the first tackle taken from an extraordinarily talented group proves to be the right one.

A rookie fifth-round pick, Lemieux was inserted into the lineup at left guard Week 8 when Will Hernandez went on the Reserve/COVID-19 list. He never relinquished the job.

PFF hated Lemieux’s pass blocking, grading him at a miniscule 16.9 in 299 pass-blocking snaps, and charing him with five sacks and 25 pressures allowed. When Lemieux graded at 0.0 in pass blocking against the Cleveland Browns in Week 15 I asked Sam Monson of PFF to explain.

“He has 4 losses in 21 pass blocking snaps, and they’re all bad losses, including one catastrophic one. His pressure rate is atrocious and the manner of his losses is even worse,” Monson replied.

When Lemieux lost in pass protection, he did tend to lose badly. Still, the Giants liked enough of what they saw to relegate Hernandez to what amounted to spot duty.

“I think he’s got a tremendous upside, but we’ve gotta keep working at it. The only way he’s going to get better is to go through these little periods of ‘shoot I got bull rushed here, how do i need to put my hands, do I need to separate, do I need to sit, where’s my back foot?’ “ DeGuglielmo said. “All these little pieces … now he knows, now he felt it, he’s gotta put it into play … It might take two or three shots.”

If the second half of the season is an indication, the left guard job is Lemieux’s to lose entering 2021.

Hernandez has never become the mauling offensive line anchor he was projected to be when the Giants made him the 34th overall selection in the 2018 NFL Draft. Still, it was stunning to watch him fall so far out of favor that he played only 10 snaps in Week 16 and never saw the field in the Giants’ Week 17 season finale.

The Giants never expressed any dissatisfaction with Hernandez after he returned from the Reserve/COVID-19 list. In the season’s final seven games, though, he only played 20 or more snaps twice. It was apparent, though, that the Giants preferred the skill set and upside of Lemieux.

Hernandez’ PFF grades was 58.1 (a disappointing 50.1 as a pass blocker, a pedestrian 59.1 as a run blocker). Hernandez gave up 25 pressures in 336 pass-blocking snaps, one every 13.4 snaps. That’s not much better than Lemieux, with the difference being only one of those pressures became a sack. Still, Hernandez was only 81st among 94 qualifying guards in pass blocking efficiency.

Hernandez was, of course, drafted before Joe Judge became head coach. If the Giants chose to move on from Kevin Zeitler this offseason it is going to be interesting to see if they look to Hernandez to win that job or if they try to fill that hole in the draft or free agency.

Gates played every offensive snap in 2020. After an admittedly rough start in which he said “I wasn’t very good for the first four or five weeks” as he transitioned to a position he had never played, Gates settled in. He should be the Giants’ starting center for the foreseeable future.

Gates is also an “alpha” personality who showed both leadership and a fiest “don’t mess with my guys” attitude.

“I think that’s just offensive line play. You gotta be a tough, gritty kinda guy to play offensive line. You’ve gotta have a little bit of attitude,” Gates said. “You gotta get after guys … you kinda gotta set the tone.”

The veteran guard was good in 2020. Just not as good as he has been throughout his career since the Cincinnati Bengals made him a first-round pick (27th overall) in 2012.

Zeitler’s overall PFF grade (65.9) was the lowest of his nine-year career by nearly 10 full points. The 28 pressures he allowed were just one behind the career-worst 29 he allowed in 2017. In 2018 with the Cleveland Browns, Zeitler led all guards with a 98.8 pass-blocking efficiency score. This year, he was 33rd among 58 guards who had at least 355 pass-blocking snaps.

The Giants have a decision to make on Zeitler, who turns 31 in March. His cap hit of $14.5 million is second on the Giants only to Nate Solder’s $16.5 million. Do the Giants keep him and hope that 2020 was not a sign of slippage? Or, do they save $12.5 million against the cap by cutting him? If they did that, they would have to hope Hernandez or Lemieux could handle that spot, or that free agency or the draft would bring a replacement.

The Giants signed the veteran with the intention of using him as a swing tackle, a versatile backup who could do an adequate job at left or right tackle and even fill in at guard in an emergency. That is a role Fleming had filled capably for the New England Patriots and Dallas Cowboys over the first six seasons of his career.

That changed when Solder opted out. Fleming became a full-time starter at right tackle for the first time in his career. Predictably, the results were mixed.

Still, over the final eight games of the season Fleming allowed only one sack and 11 pressures. He had four games in which he did not allow a single pressure.

It will be interesting to see if the Giants bring Fleming, who can be a free agent, back in 2021. Third-round pick Matt Peart could ascend to the starting right tackle role, leaving Fleming to fill the role he was originally brought to the Giants to play — swing tackle.

When the Giants drafted Peart at the end of the third round, those Big Blue View asked about the UConn right tackle — including head coach Randy Edsall — opined that Peart had a bright future but would benefit from not having to be relied upon as a rookie.

The early-season struggles of Thomas and Fleming led the Giants to begin giving Peart snaps at both right and left tackle. Over Peart’s first half-dozen or so appearances he played well, leading to calls from yours truly and others to get Peart into the lineup in place of Fleming.

Then, things went downhill for the rookie.

Peart had a poor game against the Philadelphia Eagles and played only 10 snaps. He then landed on the Reserve/COVID-19 list and when he returned the Giants had replaced Marc Colombo with Dave DeGuglielmo as offensive line coach.

Peart had a poor effort Week 14 against the Arizona Cardinals, compiling a 0.0 PFF pass-blocking grade and giving up a sack and two pressures in just seven pass-blocking snaps, didn’t play Week 15 due to an injury, had another poor game Week 16 and never got on the field Week 17.

The long-range plan seemed to be for Peart to become the starting right tackle in 2021. We will have to see if that remains the case after Peart’s end-of-season struggles, or if the Giants go in another direction.

Backup center Spencer Pulley didn’t play a single offensive snap and was on the field for only seven special teams snaps. He carries a base salary of $2.325 million and a cap hit of $2.75 million. The Giants could save all of that money by cutting Pulley.

Veteran guard Chad Slade played three snaps, which is three more than he played all of 2019 when he was inactive for every game. Slade spent most of the season on the practice squad as an insurance policy.

Jackson Barton is a developmental offensive tackle claimed off waivers early in the season from the Kansas City Chiefs. He never appeared in a game.

Kyle Murphy is an intriguing former undrafted free agent out of Rhode Island. The Giants promoted him from the practice squad in mid-November, but he never appeared in a game. I have always believed the Giants did that to prevent another team from poaching Murphy during the second half of the season.

What happens with Nate Solder will also bear watching. He opted out of the 2020 season, but is under contract for two more years. The nine-year veteran will be 33 next season. Solder carries a $16.5 million cap hit for 2021. Will the Giants cut him and save at least $6.5 million against the cap, or keep him as a possible alternative to Fleming?