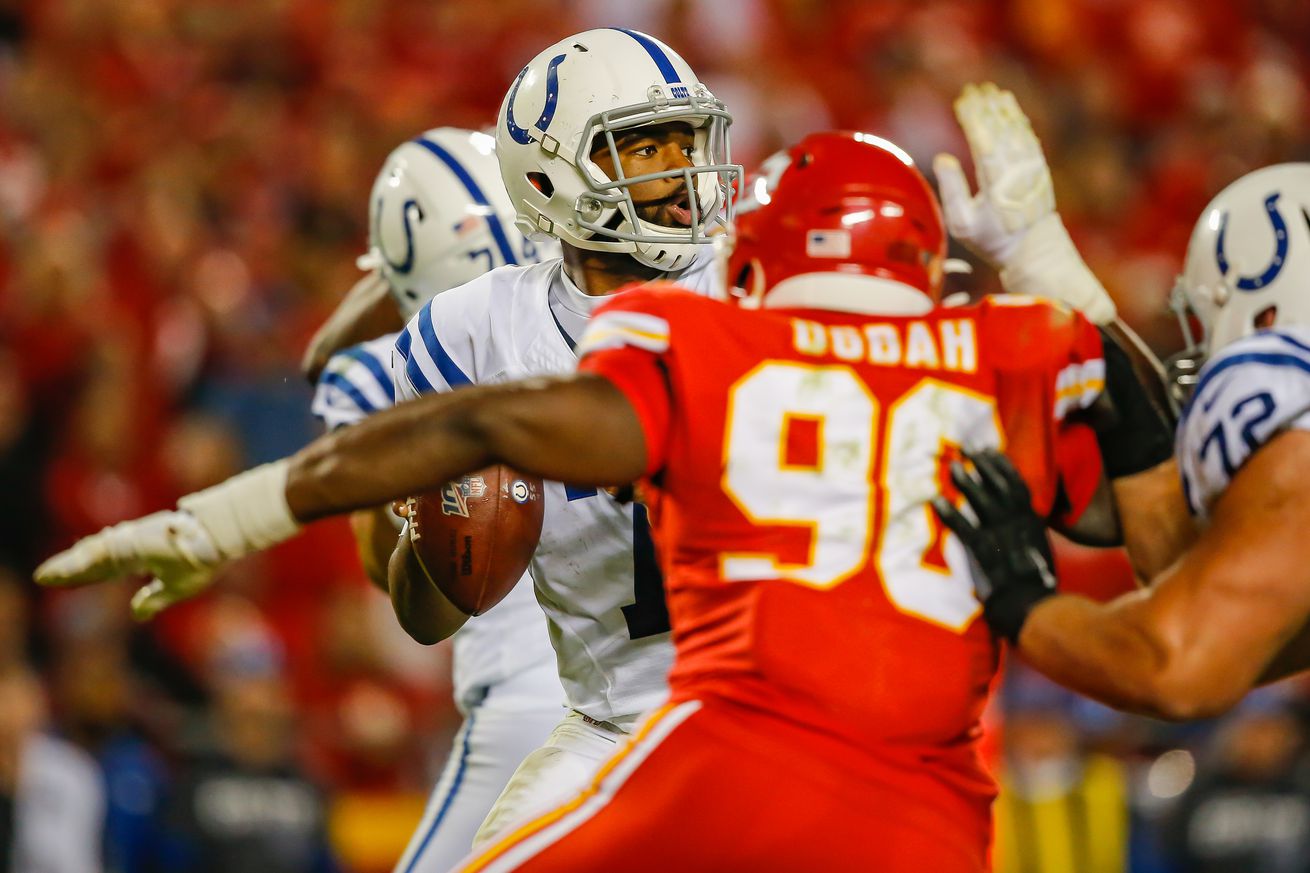 Trying to save? These 5 players can help the Giants do just that!

The New York Giants are in a state of modification. For the first time since 2016’s spending spree that resulted in the resigning of Jason Pierre-Paul, and the additions of Janoris Jenkins, Damon “Snacks” Harrison, and Oliver Vernon, the Giants have cap room — just under $62 million as a matter of fact, and after the likely releases of Alec Ogletree, Rhett Ellison, Kareem Martin, and possibly Antonie Bethea, that number could reach around $81 million.

There are tons of enticing free agents that the Giants can afford with all this cap space, but there are also key depth pieces who could be brought in to compete for starting jobs and key roles. I want to go over a few of these low-cost free agents that won’t necessarily break the bank, but have high upside and may fit what the Giants are trying to do under new head coach Joe Judge.

Ogbah is a former second-round pick in 2016 by the Cleveland Browns who was made expendable after the Browns acquired Oliver Vernon from the Giants. He is 6-foot-4, 275 pounds and tested in the 91st percentile in the 10-yard split (1.58) and the 40-yard dash (4.63), while also testing 83rd percentile in the broad jump at just over 10 feet for the defensive ends at the Combine. Ogbah possesses great length with 35½-inch arms and 10-inch hands, so from a measurable and athletic standpoint, he checks the necessary boxes.

He’s more known for being a solid run defender than a high-end pass rusher, for he isn’t overly bendy and he does have some stiffness in his hips. Ogbah has earned 19 sacks, 19 batted passes, and 85 hurries, with two seasons of 5.5 sacks. He’s an athletic 26-year-old EDGE defender, who is a free agent from a team that just won a Super Bowl, and he’s very affordable.

There’s a glaring need at the EDGE position for the Giants. While they may sign a more prominent pass rusher, someone like the Jaguars’ Yannick Ngakoue or the Ravens’ Matthew Judon, it is still essential for the team to bring in players like Ogbah for the rotation.

Defensive coordinator Patrick Graham loves to go 2-4-5 and 1-5-5, with a lot of EDGE type of players lining up in a fluid, unpredictable, manner and Ogbah can fit into this equation with his hand in the dirt or a 2-point stance. Vinny Curry and John Simon were both free agents in 2019 who had similar stats to Ogbah and they landed a one-year, $2.25 million, deal and a two-year, $4.15 million, deal. respectively. Ogbah is 26 and Curry was 31, while Simon happened to be 28. I expect Ogbah to make something considerably more than Curry and Simon, due to the state of the EDGE position’s talent level and Ogbah’s age, but it won’t be something to break the bank and the Giants should check out their options with the former second-rounder out of Oklahoma State.

The 6-foot-2, 194-pound, Titans’ receiver is now a free agent. Sharpe was utilized heavily when the Titans ran 11 personnel this season; the problem is that the Titans didn’t run 11 personnel too often, given their state as a run-first team with multiple tight end sets. Sharpe was stuck behind star rookie A.J. Brown and former top 10 pick Corey Davis, while also playing behind Adam Humphries in certain situations. Sharpe played only 44 percent of the offensive snaps (444 snaps total), but there are reasons to like him; he’s a good blocker, which Dave Gettleman appreciates, he’s 25 years old with three years of experience, he’s a solid route runner, and he’s going to be cheap.

In 2019, Sharpe had 25 receptions on 35 targets, with 20 of those receptions coming on first down, along with four touchdowns. According to Pro Football Focus, he ranked 41st in the league in route running, 40th in overall offense, and 13th in drop rate for on-target passes, a pretty solid showing according to their metrics. Jaguars’ wide receiver Chris Conley was 26 and coming off of a very similar year last offseason and he commanded a two-year, $4.6 million deal, while the Colts Donte Moncrief signed a two-year, $9 million deal. Sharpe will be affordable, he gives a lot of effort, and he would be a solid addition, but not one that would athletically wow anyone, but there may be another wide receiver free agent that could do that...

An electric playmaker, the former first-round pick by the St. Louis Rams should be a target for the Giants. Austin has spent the last two years with Jason Garrett in Dallas, and Garrett utilized his skill set to maximize the athletic ability of those Cowboys’ offenses. With only 21 catches and 12 rushes through those two seasons in Dallas, Austin was able to score four touchdowns on that limited work while always being a threat on special teams. He played a total of 307 snaps in 2019. His contract would not be large and he can impact two key phases of football.

The addition of Austin would add a unique athlete to an offense that is going to get the most out of Evan Engram, and already has the most athletically dynamic running back in the league. The trio of Engram, Barkley, and Austin as an athletic tertiary piece, along with the toughness and skillsets of Sterling Shepard and Golden Tate, would make for a tough offense to game plan against.

Austin’s presence as an athlete can make a difference by itself if utilized correctly, and it won’t come at an unreasonable price whatsoever. I feel it’s a low cost, moderate reward, with the potential for a few contest-winning plays that could help sway a few games - sounds like a good deal to me.

A 6-foot-4, 215-pound, safety who is stiff in the hips and possibly too long for his own good at times, but possesses a very long wingspan, which does come in handy when playing the middle of the field. He’s also excelled on special teams while starting four games in the last two years on defense. He only has 78 total tackles in his career, but Kearse has moved around. He played predominantly at the strong safety position, but there were times when the Vikings would have him at corner or even playing deep. Kearse had six passes defended during the 2019 season and he was mostly relegated to the third safety role in Minnesota because of Harrison Smith, Andrew Sendejo (at times), and Anthony Harris. The latter being a player the Giants may want to look at for bigger money.

Could there be more potential with Kearse? Was he stuck behind incredible talent and never got a chance to shine? I feel the Giants should peer in Kearse’s direction because he’ll come at a very low price and the Giants need some defensive back depth, as well as special teams players. The signing would be low risk and Kearse could end up being released in the offseason if it doesn’t work out, but a shot on a long defensive back like Kearse isn’t the worst thing in the world.

Luvu’s going into his third season out of Washington State. He’s an Exclusive Rights Free Agent which is a distinction given to any NFL free agent with less than 3 accrued seasons, whose contract ran out. A player with this status may only sign with their original team if that team places a minimum salary tender on the player. Luvu has talent, but Jets’ defensive coordinator Gregg Williams didn’t utilize him this year, which leads me to believe the Jets may not even offer Luvu the ERFA.

This is where it gets interesting: under Williams, Luvu played 6 percent of the snaps, recording 5 tackles, 1 sack, and mostly participating on special teams. Under Todd Bowles and Kacey Rogers in 2018, Luvu’s rookie season, he recorded 22 tackles, 5 tackles for a loss, and 3 sacks on 40 percent of the defensive snaps. Luvu became a third-down rusher who would generate pressure with Bowles. He had 18 pressures in that rookie season, and the defense Bowles runs is a base three down, odd front, defense. Graham runs a lot of multiple fronts, but he uses a lot of three down, odd front, four linebackers, and Luvu would fit in well in that base type of look. He would also excel in Graham’s 2-4-5 and 1-5-5 looks, as a fluid moving second-level defender who could stunt or use his above-average quickness to force pressures. Luvu must clean up his tackling and become stouter against the run, he’s only 6-foot-3, 236 pounds, but he would be an excellent addition, at a low cost, for a team that needs to generate pressure.