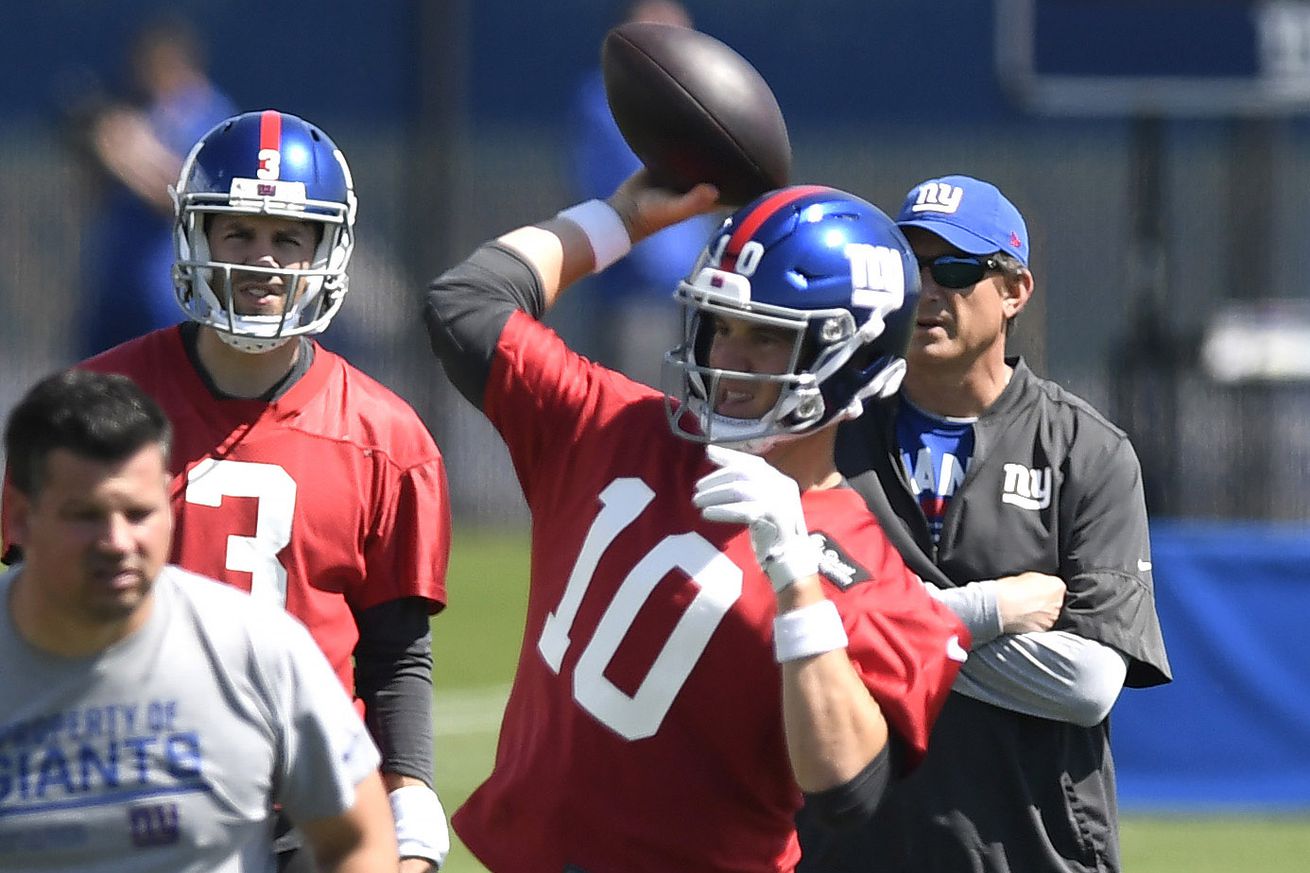 “Every time they (players) come on the field with their helmets on it’s about the ball, it’s about the ground, it’s about getting yourself better and they handled today just like they have the other OTAs,” Shurmur said. “Good work. It was very competitive.”

Here are some of the takeaways from Tuesday.

Odell Beckham Jr. was cleared for Practice as he continues his recovery from last season’’s fractured ankle. He did wide receiver drills and ran a handful of pass routes without any defense. [Full story]

Giants have “come a long way”

With a new coaching staff, the Giants are learning new offensive and defensive schemes. How far along are they in that process?

“We’ve come a long way. There are hours and hours of work in the weight room, in the meeting room and on the practice field, and when you watch a practice, I think it’s important that they are playing fast with no anxiety, and when a mistake occurs, which happens in practice – now Jacksonville didn’t see that mistake, so as long as we don’t repeat it, that’s what practice is for,” Shurmur said. “So that’s what you go through. They’ve got to come out here and do it and those mistakes that were made and I noticed a handful and then there are some other things that you didn’t quite notice and you will see on tape, you get them corrected and you move on. So that’s why you have to practice a team game.”

Defensive tackle Damon Harrison can be highly entertaining when he chooses to be. Tuesday, he chose to be. He greeted media with a caustic “what the hell you all want?” remark that drew laughs.

Asked why he skipped some of the voluntary workouts he said, again to laughs, “I was minding my damn business.”

His best stuff came when he was asked about rookie running back Saquon Barkley.

“I’m excited to get out there in training camp so I can hit his ass,” Harrison said. “I told him it’s not Penn State, he’s not going up against Josh Banks (a reserve Giants defensive lineman) at Wake Forest.

“Get in-between the lines, get the ball in your hands I don’t care what anybody says it’s time to work. I don’t think we’re going to be able to hit him too hard, but I’m gonna hit him.”

Landon Collins (forearm) did limited work, much like Beckham. Safety Darian Thompson and defensive lineman Josh Mauro rode exercise bikes and worked on the side. The reasons are unknown. Rookie defensive end R.J. McIntosh and second-year man Avery Moss, who were held out of OTAs, also did not practice.

Eli Manning: Defense a test to play against

While Eli Manning is learning another new offense, he is facing a completely revamped Giants defense in practice every day. He finds himself challenged by what defensive coordinator James Bettcher is trying to build.

“They’ve got some good stuff,” Manning said. “It’s great work for us going against a blitz-heavy style of defense where we’re making a lot of calls. Offensive line’s getting tested every day. I’m going to be tested just trying to read the coverages and disguises and everything. I think it’s been great work.

“They’re making some plays. They’ve got talented guys on the other side. Every day is competitive, trying to win the day.”

Before practice began on Tuesday the Giants made a roster move. They added tight end Scott Simonson and waived undrafted rookie cornerback Aaron Davis with an injury. Simonson has played 18 career games in three seasons with the Oakland Raiders and Carolina Panthers. He has only one career reception. He spent last season on Carolina’s injured reserve list with a back injury. He was not tendered by the Panthers and became an unrestricted free agent.

The Giants now have Simonson, Garrett Dickerson, Ryan O’Malley, Jerell Adams and Kyle Cater competing for spots behind Evan Engram and Rhett Ellison. Shane Smith, a fullback, is also listed as a tight end on the team’s official website.