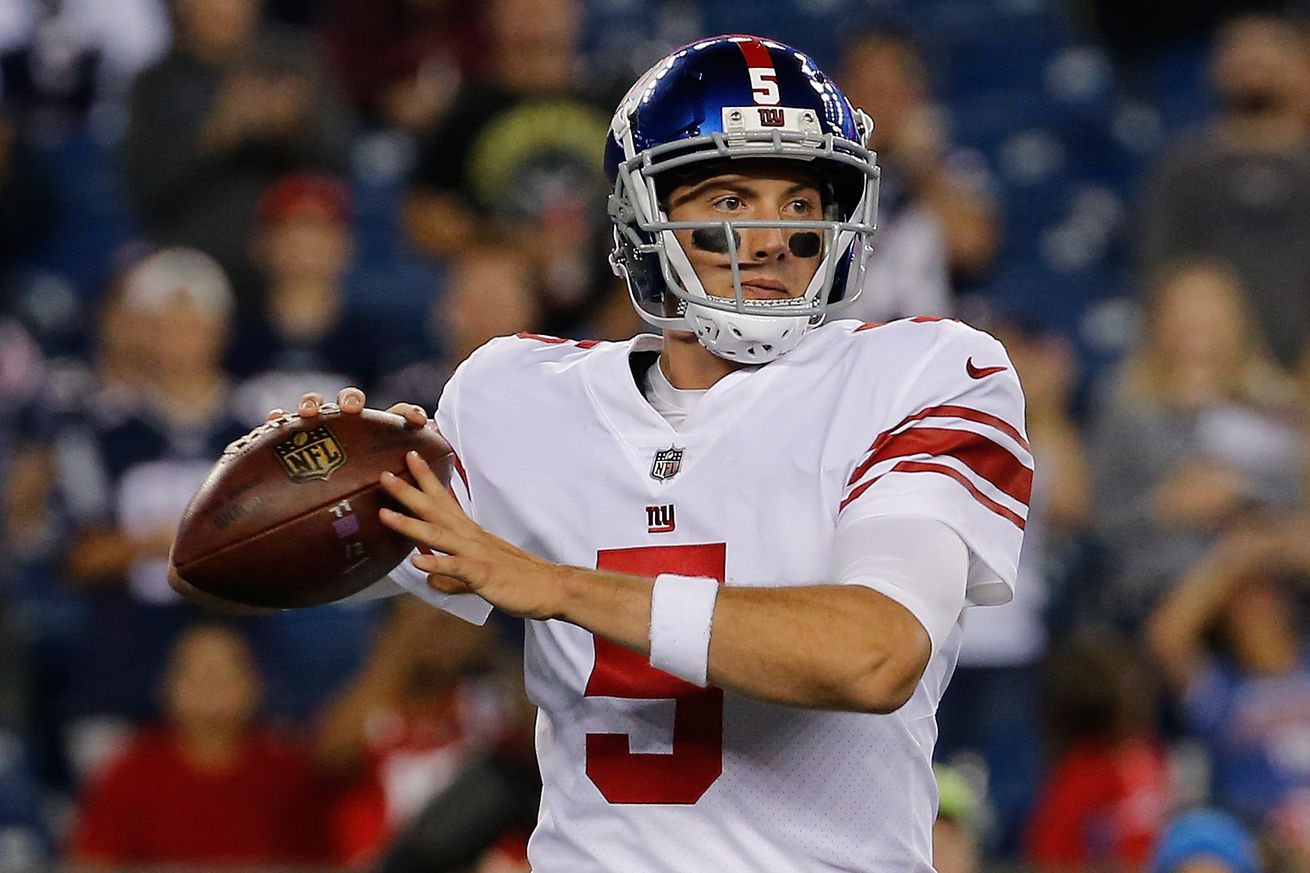 Let’s open it up and see what comes tumbling out

The New York Giants’ offseason remains in a holding pattern. The team cannot hire Pat Shurmur as head coach -- if indeed that is what they are ultimately going to do -- until Shurmur and the Minnesota Vikings are done playing. So, what should we do?

MICRO BUSINESSES
ALBUM: Master KG – Jerusalema (Deluxe…
Car Sex The Best 6 Positions
How to Choose a Web Designer for Your…

Well, how about opening up the Big Blue View Mailbag?

Michael Patrick Conlan asks: If John Mara wants the Giants to be good next year how does selecting a QB at Number 2 make any sense? That QB would basically sit for the next two seasons until he gets up to speed. None of these so-called franchise QBs would start next season and Eli Manning / Davis Webb are already ahead of them. Seems like a contradictory statement.

Ed says: Of course John Mara wants the Giants to be good next year. He wants them to be good every year, but it doesn’t always happen. As for drafting a quarterback at No. 2, it makes a lot of sense. Hopefully, it will be a long time before the Giants pick this high in the draft again. They need to identify a quarterback of the future, and chances are someone taken in the top two picks in the draft is more likely to be that guy than someone taken in the third round, like Webb. As for how long a guy like that would sit, who knows? Have you looked around the league at how many rookie quarterbacks play? We don’t yet know for certain who the head coach is. We don’t have any idea if Eli Manning will be back next season. We don’t know who will play well, who won’t, or who might get hurt. Also, the draft is not just about the upcoming season. If the Giants think taking a quarterback is the best move for the long-term good of the franchise, that is what they will do.

Joe Santello asks: What are the odds that we trade this pick for a boatload of picks? In my opinion, it’s the only option at #2 with this many mediocre quarterbacks and so many QB hungry teams?

Ed says: Anything is possible. It is, though, far from the “only” option. Selecting a quarterback is undoubtedly an option. Doesn’t matter who you, me, or anyone else likes. It only matters who Dave Gettleman and the head coach like. Could be Saquon Barkley, though I will be honest and say that is not an option I personally would favor. Maybe it’s a trade down. Maybe it’s offensive lineman Quenton Nelson or defensive end Bradley Chubb. There are any number of options, some better than others based on your opinion of the players.

Ed says: I am really not sure what Shurmur will do for an offensive coordinator. I would not expect it to be a guy like Todd Haley (just let go by the Pittsburgh Steelers) or John DeFilippo (Philadelphia Eagles’ QB coach). Those guys will want to come in and have carte blanche to install and run their own systems. Shurmur, with a long history of success as an offensive coordinator, won’t give them that. The Giants will run Shurmur’s offense. My expectation is perhaps a young, first-time offensive coordinator who will help implement Shurmur’s system. As for special teams, I would watch for ex-Giants assistant Larry Izzo or former Carolina Panthers’ special teams' coach Thomas McGaughey, who is obviously familiar to Gettleman.

Maks Roman asks: We know there is quite a substantial chance Spagnuolo is back as the DC. Not a lot of people are thrilled with it, most reactions range from “meh” to “ Oh God, no!” Personally, I have the “meh” opinion and therefore here’s my question:

Who do you think should be Giants DC next season?

Ed says: I think bringing Steve Spagnuolo back as defensive coordinator makes a lot of sense. There are pros and cons, and as I said in the recent ‘Big Blue Chat’ podcast, more failure on Spags’ resume than you would like. There are, however, circumstances surrounding a lot of that he could not control. Spagnuolo hired Pat Shurmur as offensive coordinator in St. Louis, so there is a trust factor there already. That will be important, since Shurmur is an offensive-minded coach. For more of my thoughts on Shurmur’s potential staff, see the post I devoted to that.

Tyler Auffhammer asks: After losing the starting job early this season (amid injuries), Paul Perkins did not recover. Meanwhile, Orleans Darkwa had a solid season with Wayne Gallman learning behind him as the #2. Darkwa is a free agent, as is Shane Vereen, and they still have Perkins and Gallman. What do the Giants do with their backs heading into 2018?

Ed says: I’m not sure. Again, Gettleman hasn’t talked about it and the Giants do not officially have a head coach. That said, I would like to see Darkwa back. Provided, of course, it is on a reasonable contract. I would let Vereen go, and I will be surprised if the Giants don’t do that. The question really is do the Giants want to use a lot of resources in free agency or the draft to add to this position? I wouldn’t, as I believe it is a secondary priority. We will see how they feel.

Jessie Ortiz asks: It’s obvious they need O-line help and a future QB but running back can be upgraded as well. If Le’Veon Bell hits the market, any chance they lay out the cash to grab him?

Ed says: Absolutely not. This is why fans are not general managers. They see a big name and think “my team has to go get that guy.” It doesn’t work that way. First of all, the Steelers are not letting Bell go anywhere. Second of all, the Giants have many other things they need to spend money on before spending beaucoup bucks on a running back. They have an offensive line to fix. They desperately need linebackers. They have to find money to give Landon Collins a big contract this year or next. There is Odell Beckham Jr. to consider. If they want a big-time running back they could draft Saquon Barkley. I think running back is down the Giants’ list of priorities and not a good way to spend big money. Besides, how often do big-money free-agent deals for running backs actually turn into good investments?

John Gmen Hester asks: What’s the deal with Davis Webb? Why is there no confidence that he can succeed Eli and we can go another direction in the draft?

Ed says: Who says there is “no confidence” in Webb? No one can say that with any authority. We don’t know what Dave Gettleman thinks of Webb. We don’t know with 100 percent certainty that Pat Shurmur is going to be the head coach. If he is, no one has any idea what Shurmur thinks of Webb. Right now, we couldn’t tell you whether Shurmur has ever even watched Webb’s college film. I wouldn't make any assumptions at this point.

William Ridley asks: There has been a mass exodus of coaches. Do you know if it is because they think they’ve underperformed and would be fired anyway or they aren’t happy with the moves of Reese/McAdoo/Gettleman?

Ed says: The head coach got fired. Usually, the assistant coaches get fired in that situation, too. The Giants did not do that, but they told assistants they were free to find other jobs. New head coaches do not inherit old coaching staffs. They bring in their own people. Occasionally there are holdovers, but when that happens there are usually connections between those assistants and the new head coach -- like Pat Shurmur and Steve Spagnuolo. Sometimes a long-term assistant can be kept on, but the head coach hires his assistants. The fact that coaches have left says nothing at all about the Giants or the new regime. It just says these guys needed jobs and found them. Why wait around, find out three weeks from now Shurmur doesn’t want you on his staff, and be shut out of the job market?

Richie Laureano asks: I think we should draft the best player in this year’s draft, (RB) Barkley! Do you think Browns will take him at #1 and draft a QB at #4?

Ed says: I can’t speak for the Browns. I would, however, be absolutely astonished if Cleveland does not take a quarterback with the first overall pick. They have to get that position straightened out before they can become respectable. As for Barkley, anything is possible but my guess is the chance the Giants would select him No. 2 would be a slim one.

Jorge Passapera asks: The Giants are officially in rebuilding mode — they have needs on both sides of the ball. So, come draft day what would you do with the second pick? Would you go with Josh Rosen, Quenton Nelson, Bradley Chubb, Saquon Barkley or would you trade the second pick?

Ed says: Given my choice of players, none of the above. I am on the Sam Darnold train. At this point, I am not a Rosen guy. If the Giants select him, fine, they get paid to study these guys and have a lot more info about and knowledge of players than I do. He just isn’t the guy I would prefer. As for trading down, if the quarterback they want is taken by the Browns I’m fine with trading down (as long as they stay in the top 10) and collecting a couple of extra picks. As for rebuilding mode, the only team in rebuilding mode in the NFL is the Browns. The Jacksonville Jaguars went 3-13 a year ago and are playing in the AFC Championship Game on Sunday. The Giants want to be as good as they can as fast as they can.

How to Choose a Web Designer for Your Small Business Website