Meet the rookie: A closer look at Evan Engram 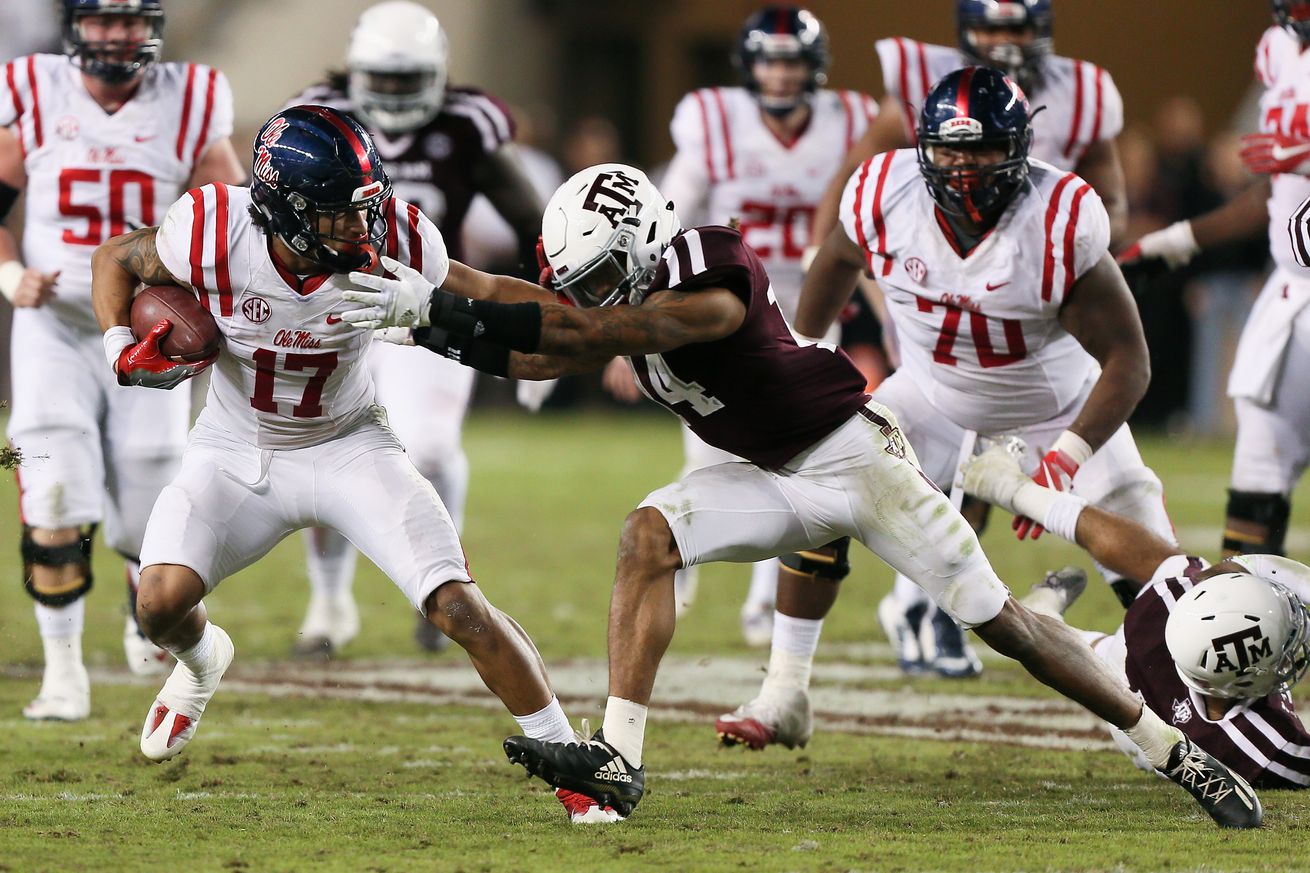 What does Evan Engram bring to the Giants’ offense?

Jerry Reese and the New York Giants surprised the draft community by selecting Ole Miss tight end and H-back Even Engram in the first round. It was expected that they would be attracted to Miami tight end David Njoku or perhaps even trade up for Alabama’s O.J. Howard when he fell. However, the Giants stood pat and went with the athletic and versatile Engram.

Many might have ignored Engram throughout the draft process based on his perceived value or his size. But now that he is a Giant, let’s take a closer look and see what Engram brings to New York.

The biggest concern with Engram is his size and how that effects his ability to block. After season after season of poor blocking from Brandon Meyers, Larry Donnel, and Will Tye, Giants fans had their hearts set on a big tight end renowned for his blocking. At 6’3”, 234, that isn’t Engram, but is he better than advertised?

The concerns that Engram’s size limits his blocking ability are valid, and he will likely do most of his work on the perimeter and at the second level in the NFl.

However, to say that he can’t block at the line of scrimmage is an exaggeration to say the least.

Let’s take a look at a play against Florida State.

Engram lines up about as close to “in-line” as he ever does in the Ole Miss offense and blocks No. 44. To save everyone time googling the FSU roster, that is 6’4”, 280 pound defensive end DeMarcus Walker.

Engram initially looks as though he is going to release into a route, but at the snap of the ball drops his hips, gets position, and shoots his hands into Walker’s chest and gets them inside of his shoulders. Engram uses great technique here and does a great job of keeping his base wide and pad level low. And despite being outweighed by about 45 pounds, he is able to drive Walker back about five yards off of the line of scrimmage.

The run only winds up picking up a couple, but that isn’t Engram’s fault. He lays a terrific block here.

And it isn’t a fluke.

Let’s take a look at Engram in another game and against another defensive end.

Against Texas A&M, Engram lines up in his more customary position off the line of scrimmage, though still fairly tight to the offensive line.

This time Engram is going against 6’6”, 260-pound defensive end Daeshon Hall. Engram shows no hesitation getting upfield for his block and once again does a great job of getting his pad level down and using leverage to his advantage. Engram uses great technique here, getting under Hall’s pads, has good hand placement, keeps his base wide, puts his helmet in Halls chest, and drives him backward.

He isn’t able to move Hall quite as far as he did Walker, but he does enough to open a hole for an 8-yard first down run which ultimately leads to a field goal for Ole Miss.

Engram did plenty of blocking (against Hall, as well as linebackers and defensive backs) in Ole Miss’ game against Texas A&M, and while not all of it was stellar, he does a much better job than he gets credit for.

Engram’s real claim to fame is his receiving ability. Engram is a phenomenal athlete with a rare blend of height, weight, and speed for a pass catcher, and he brings dynamic ability to the table.

The Giants’ offense saw it’s points-per-game production decline by a full touchdown from 2015 to 2016, and they are expecting Engram to put points on the board, so let’s start with what he brings as a red zone threat.

Ole Miss is in the shotgun with a single back, the same formation the Giants played on the majority of their offensive snaps in 2016. Engram is lined up as a “big slot” and is matched up on a 6’0”, 206 pound safety.

Engram wastes no motion getting into his route, exploding off the line of scrimmage with good suddenness. He quickly uses up the entire cushion and when he gets within a yard of the safety uses a subtle move with his hips and shoulders to fake a post route before sticking his inside foot in the ground and breaking hard for the post route. The safety is only barely able to recover in time to get to Engram, but he has no hope of defending the pass. Engram uses that vertical leap to high-point the ball and this isn’t really a contest.

The Giants also needed a player who can attack defenses’ seams, split linebackers and safeties, and exploit the Cover 2 shells that frustrated their offense in 2016.

That’s what he does here against Florida State. Engram is lined up on the other side of the formation but still as a “big slot.” The defense appears to be in a classic Cover-2 shell over a blitz. Engram gets a free release and puts it to good use, streaking down the seam. Once again he uses a very subtle move, faking a corner route. That is enough to freeze the deep safety while Engram’s speed gets him behind the middle linebacker. Before either defender has the chance to recover, Engram is showing off his hands and snagging the ball in the end zone.

One of Engrams other notable strengths is his hands and body control. Let’s look and see how he could bail out another occasionally erratic Ole Miss quarterback from a famous football family who wears number 10.

Going back to Texas A&M, Engram is lined up in the H-Back position and he runs a wheel route. The defensive end is in coverage on a zone blitz and picks up Engram as he passes through his zone. However, Engram is just too fast for the safety to stick with and he is quickly behind him. This was almost a failed play when Chad Kelly badly underthrows Engram, almost throwing it into the dirt at his feet. However, Engram is able to get down and make the fingertip catch and just keep the ball off the turf.

It’s a nice example of adjusting to the ball and really shows off his hands and catch radius.

Finally, let’s take a look at what he can do with the ball already in his hands.

This is a pretty simple concept where Engram runs a crossing route through the void in the Aggies’ coverage. It is a concept the Giants commonly use with their tight ends, though it usually doesn’t have the bubble screen aspect this one has. Kelly fakes the bubble screen to draw the coverage down, opening up a huge hole for Engram.

But where the tight ends the Giants have fielded in the past might catch the ball and try to bull their way to the first down marker, Engram is able to stop, use a jump-cut to make the defender miss and rack up another ten yards after the catch. That is the kind of athleticism and agility the Giants haven’t had there without using Shane Vereen, Odell Beckham, or Sterling Shepard — and none of them can match Engram’s size.

No, he isn’t built like he’s a few buffets short of playing the offensive line, but to say that he can’t block and can’t help the run game is a mistake. Engram should be able to routinely block smaller linebackers and defensive backs at the second level and on the perimeter. Those are the blocks that can turn an “okay” run into a big gainer. But assuming his technique is solid, he is capable of blocking defensive ends and rush linebackers and actually open holes near the line of scrimmage. He won’t be earning his pay as a blocker, but he is definitely more capable than he gets credit for.

Engram’s ability as a receiver is self-evident. Like Odell Beckham Jr. and Sterling Shepard, Engram is a sophisticated route runner. He knows how to use his routes to get separation as well as his athleticism. He has the ability to be a reliable check-down option, rack up yards after the catch in space, threaten defenses deep, attack seams, and be a red-zone threat. Engram’s ability to do all that from a variety of positions.

Engram has the tools to be an impact player and give Eli Manning options he just hasn’t had before.

Meet the rookie: A closer look at Evan Engram