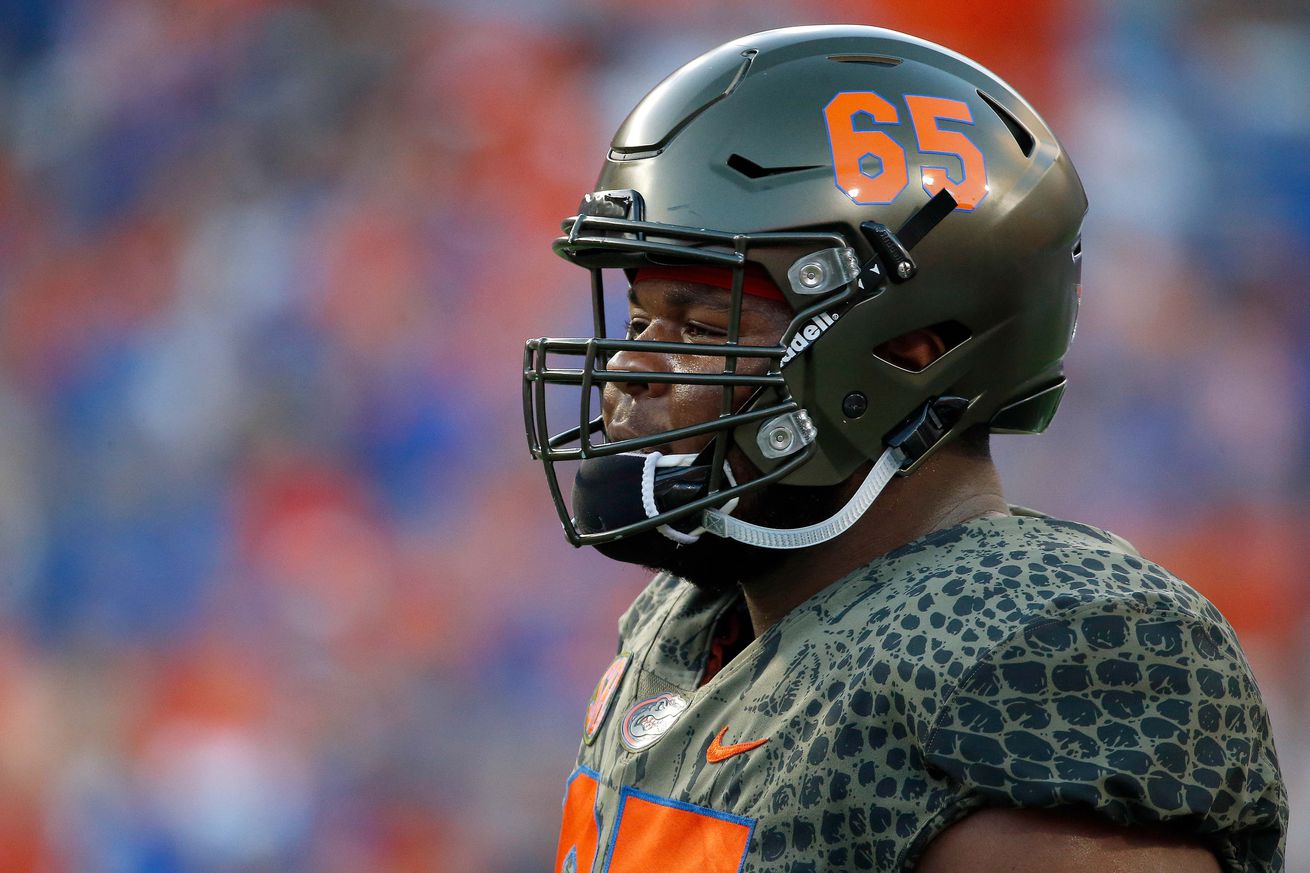 Taylor weight 380 pounds when he played at Cocoa High School, with colleges put off by his size. He originally committed to the University of Miami, but after losing 50 pounds, the University of Florida offered him a scholarship and he changed his commitment. Taylor was originally slotted as a guard coming out of high school, but he played as a true freshman in all 13 games for the Gators, starting 12 of them, at right tackle. As a sophomore, the started nine games at right tackle before moving over to left tackle for the final two games of the season. As a junior, Taylor played in all 13 games with 12 starts at right tackle.

Taylor has a hamstring injury leading up to the Combine and did not perform any of the drills other than the bench press. He elected to only perform position drills at Florida’s Pro Day.

What they are saying

Stephen White, SB Nation: On the whole, I thoroughly enjoyed watching Taylor’s film because he really likes to get after people and it shows. I see him as a guy who can come in and start from day one at right tackle and be an anchor for his offensive line for the next decade, barring injury. He can be a tempo setter who brings an attitude and an edge to the running game and who can also hold his own just fine on passing downs. If for some odd reason he doesn’t work out at tackle, Taylor also appears to move well enough to kick inside at guard if need be, too. At 6’5 and 312 pounds he has the size to play either position, and evidently the people say his arms are “long enough” too. I think he is worthy of a mid-first-round pick at least, and certainly higher for a team that either has a need at right tackle, and/or has to face several guys in that murderer’s row of edge rushers I noted up above. Taylor will match up with those guys about as well as any right tackle could, in my estimation. So I suggest those right tackle-needy teams run, not walk, to turn his name in on draft night if they are fortunate enough to get the opportunity to select him.

Lance Zierlein, NFL.com: Throwback right tackle with adequate foot quickness for pass-protection duties and above-average size and nastiness to fit the “road grader” model. Taylor strains to cave, kick or drive his opponent out of the way. His feet are good enough to slide out on speed rushers and redirect them past the pocket, but his hustle to protect his edge will expose him to inside moves from power counters. He’ll need technique work in the run game and has to keep his weight in check, but he should be an early starter at right tackle or guard with a positive impact on the run game right away. Comparison: Vernon Carey

Mel Kiper, ESPN: Taylor is a mauler on the edge. He has played both left and right tackle for the Gators, and his technique is still raw, but he has the potential to be the first offensive lineman off the board. Some teams might like him at guard, too, and the versatility is a plus.

Eric Edholm, Yahoo Sports: Upside: Massive, hulking right tackle with a mean streak. Big, heavy hands – if Taylor gets his paws on you, it’s over. Harnesses his good core power in the run game and will move people against their will. Great length and reach (85-inch wingspan) to wall off defenders with ease at times. Seeks to bully people and can unleash the nasty. Can be the anchor of a right-handed run game – turns out edge setters wide and can crash hard inside on down blocks to create nice lanes in the power series. Nice finishing skills on full display most games. Downside: Can be more of a finesse player in the run game than you’d expect – a little too much get-in-the-way blocking. Still can strain to move bigger defenders at times. Strength development is on the right track, but he might need even more work to better harness his natural power. Not yet a true road grader (but has the potential to become that). Lets rushers get into his body and can’t always redirect hands quickly enough. Gets his hands too wide, and technique will need refinement. Comparison: La’el Collins

Joe Marino, The Draft Network: A three-year starter for the Gators, Taylor improved in every season, culminating with a dominant junior campaign. Taylor offers a rare blend of mass, length, mobility and power that make him an ideal starter at right tackle. He does have some technical improvements to be made with his hands and playing with better leverage, which are fixable issues. Taylor has the upside to become an impact starter and fixture in a quality NFL offensive line.

Charlie Campbell, Walter Football: Taylor has a lot of unique qualities as a pass blocker. Despite being such a large offensive lineman, he is a really good athlete who has speed and shows the ability to bend at the knee. He has quick feet that he uses to mirror speed rushers, and his strength and length allow him to sustain blocks well to keep edge defenders from turning the corner. With his weight and strength, Taylor is able to anchor and hold up against bull rushes. While he played at right tackle for Florida, Taylor has the feet and athleticism to play on the left side if his NFL team wants to put him there. In the ground game, Taylor has the potential to be a road-grader. He is strong with a thick frame. There are times when Taylor knocks defenders off the ball and opens up gaps for his back. He can generate movement in the ground game to supply some excellent lanes for his backs. Aside from being able to play power man, Taylor is quick to the second level and packs a punch when he gets there. Taylor shows nice awareness to hit combo blocks on defensive linemen and linebackers. With his athleticism and quickness, Taylor could be a fit in a zone-blocking scheme as well. Taylor could use some developmental time in NFL because he is not consistent yet. He is raw and needs development. Comparison: Morgan Moses

This is an easy yes, and you probably already knew that. If Taylor is on the board with Miami’s 13th overall pick, they absolutely have to be considering him, if not, as White said above, the Dolphins should “run, not walk, to turn his name in on draft night.” I selected Taylor in the SB Nation 2019 NFL Writers Mock Draft and I think he absolutely fits the rebuild the Dolphins are doing right now. Taylor is an easy pick for me, and he immediately plugs into the offensive line, replacing Ja’Wuan James at right tackle and gives Miami their bookend tackles with Laremy Tunsil on the left. If Miami is really looking to build the foundation of the team, Taylor fits that role.