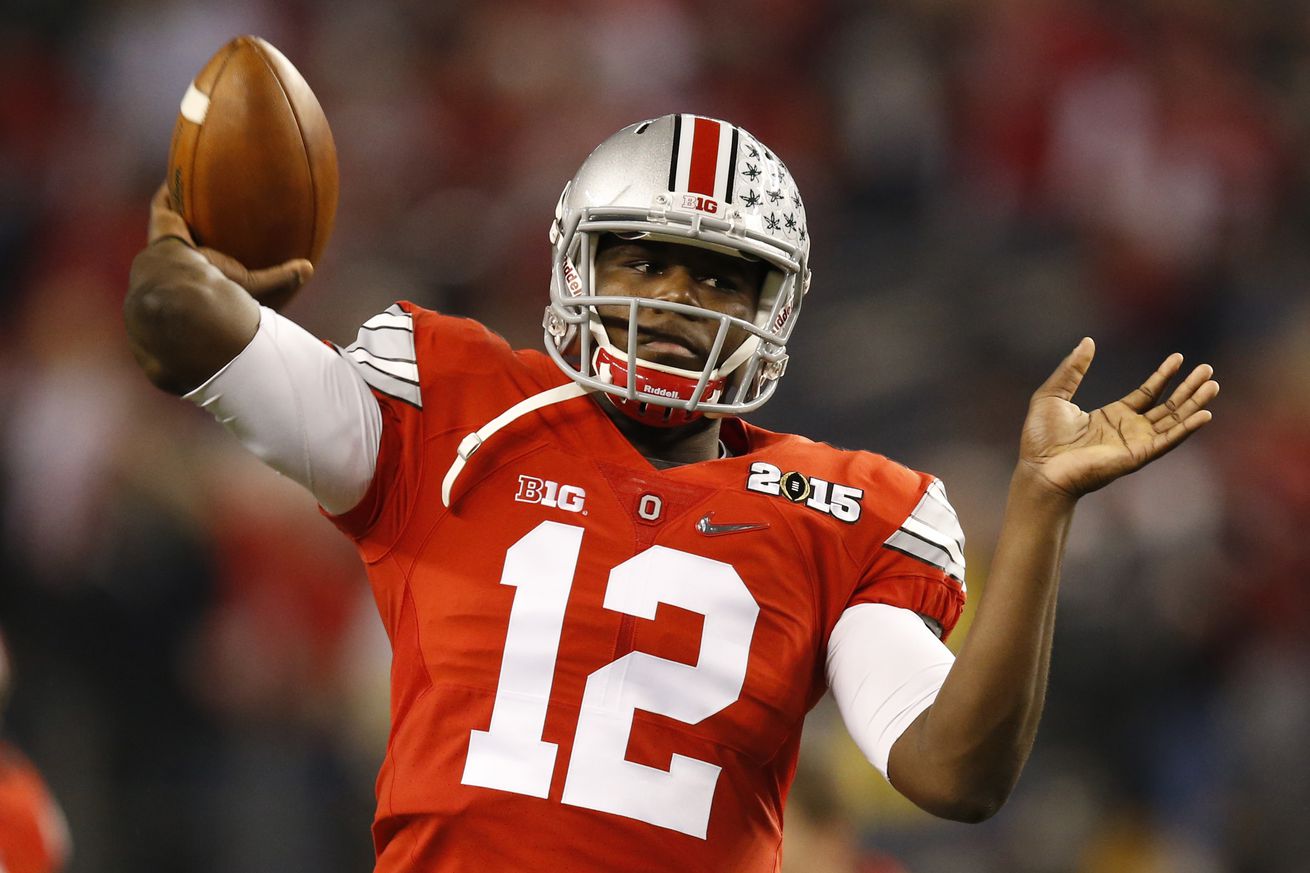 Last offseason, the Miami Dolphins signed quarterback Ryan Tannehill to a $96-million contract extension. Through the hiring of new head coach Adam Gase, the Dolphins expect Tannehill to flourish in his fifth year as a starter. Even so, the Dolphins will look towards the draft to find a quarterback the team can develop for the future. Who better than Ohio State Quarterback, Cardale Jones?

Wentz, Goff, Lynch, Cook, Prescott, and Adams.  Those are just a few of the quarterbacks NFL teams are doing their homework on in hopes of finding the next great field general.  Even though he might not get drafted as high as some of the aforementioned quarterbacks, Cardale Jones has the skill-set and work ethic to succeed in the NFL.

Cardale Jones was born and raised in Cleveland, Ohio.  Throughout his high school career, Jones played under head coach Ted Ginn Sr. at Glenville High School.  Rivals.com rated Jones a three-star recruit coming out of high school.  He would later commit to THE Ohio State University.  Jones seemed firmly cemented behind Braxton Miller and J.T Barrett at the time, however; all that would change during his sophomore season.  After both Braxton Miller and J.T Barrett sustained injuries, Cardale Jones was forced into his first real test in the Big Ten Championship game vs Wisconsin.  Jones played fantastic throwing for 257 yards and three touchdowns.  The Buckeyes would defeat the Badgers 59-0, advancing to the first ever College Football Playoffs.

In the AllState Sugar Bowl, Cardale Jones faced Nick Saban and the #1 ranked Alabama Crimson Tide.  Jones threw for 243 yards, one touchdown and one interception.  Best of all, the Buckeyes managed to knock off #1 ranked Alabama, 42-35.  The Buckeyes were now headed to the College Football National Championship to take on the Oregon Ducks.  The National Championship game was the biggest of Jones’ career.  Coming into the game, no one gave the Buckeyes a chance.  Jones took control of the offense and did exactly what he did in the two games prior.  He completed 16 of 23 passes for 242 yards, one touchdown and one interception.  He also added 38 yards and a touchdown on the ground.  The Buckeyes were once again National Champions, due in large part to Cardale Jones.

Cardale Jones is a defensive coordinator’s worst nightmare.  At 6'4, 250-pounds, Jones is physically built like a tank.  He has the ability to run over opposing linebackers or hurdle over them gaining extra yards in the process.  Here, Jones drops back to pass and immediately feels the pocket collapsing.  He decides to take off up the middle, lowering his shoulder and trucking straight through Oregon's linebacker.  His second effort allows him to gain an additional two yards, and the first down.

The next play looks like a designed run from the start.  Jones drops back to pass and immediately takes off running. This time instead of trucking over the defensive back, he decides to hurdle over the defender.

Cardale Jones is a legit weapon in the run game.

He can also tackle like a linebacker if necessary.  In this play, Jones throws and interception and then makes the defensive back pay for what he's done.

His nickname "12-gauge", represents the cannon for an arm in which he possesses.  With the flick of a wrist, Jones can throw a rifle soaring passed enemy defenders, effortlessly downfield.

Jones does not get rattled when the pocket collapses.  In fact, he seems to thrive when pressure mounts.  With a defender in his face he is able to throw a perfectly placed ball for the touchdown.

Jones has great presence in the pocket.  Here, he uses his quick feet to move around the pocket, keeping his eyes downfield.  After he moves forward in the pocket, Jones rolls to the right completing the pass  Yes, the pass could be thrown better, but his awareness in the pocket is very good.

Cardale Jones lacks the experience that many of the other prospects have.  After being named the starter prior to the 2015 season, Jones was unable to keep the job inevitably losing it to JT Barrett.  This tells me he didn't work hard enough or put in the necessary time to remain the starter.

Jones also has issues with accuracy.  When watching tape, he would routinely miss short and intermediate throws. He has trouble with zone defense, as emphasized in the clip below.

For all the great plays he has made throughout his short-lived college career, there are still quite a few throws that make you scratch your head.  With pressure in his face Cardale Jones loses the football, resulting in a fumble.

Jones is far from perfect and will need the right coaching staff to succeed in the NFL.

Cardale Jones has the skill-set to be a big time quarterback in the NFL.  He is viewed by many teams as a developmental quarterback and will most likely be selected on the second or third day of the draft.  Nonetheless, whatever team decides to draft Jones will be happy with the player they obtain.  His big 6’4, 250-pound frame makes it nearly impossible for defenders to knock him down. As a passer, Jones stands tall in the pocket, using his deceptively quick feet to move flawlessly as pressure approaches.  Jones has a cannon of an arm that enables him to make throws other quarterback’s cannot.

Even though the Dolphins have Ryan Tannehill, the team is in dire need of bringing in competition to compete with the fifth-year starter.  Jones has everything you could ask for in a NFL quarterback.  With time and the right coaching, Jones could be one of the NFL’s thirty-two starting quarterbacks.  He has the skill-set, the desire and the knowledge to succeed in the NFL.  Whether the Dolphins decide to use a mid-round pick on the 23 year old quarterback is anyone’s guess.  One thing is for certain, Cardale Jones has an opportunity to succeed wherever he gets drafted.