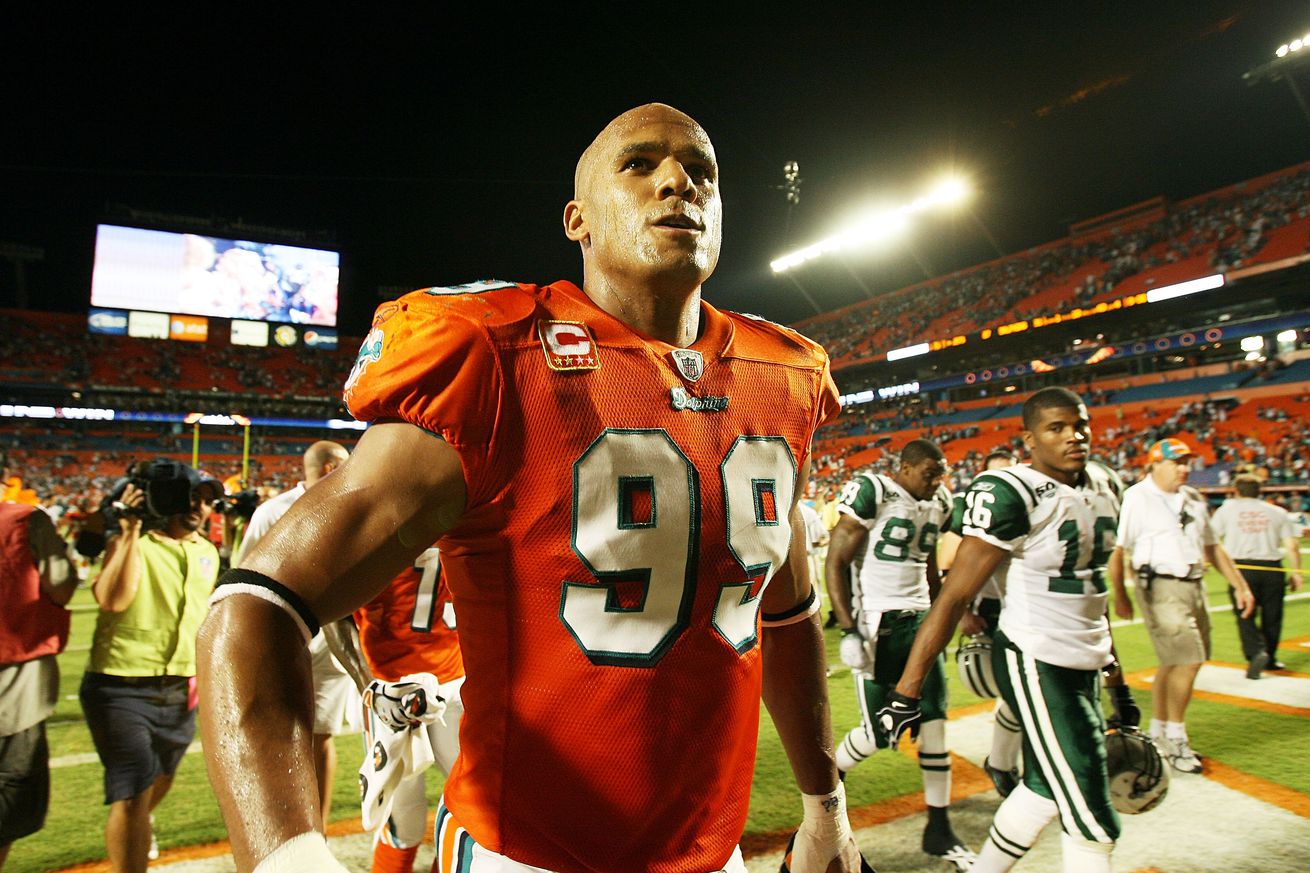 Taylor spent the day with the Miami Herald, and he was not shy.

Miami Dolphins legendary defensive end Jason Taylor will find out tomorrow whether he is a first-ballot Hall of Famer when the Pro Football Hall of Fame voting committee meets to determine the 2017 induction class. Taylor, who is one of the 15 finalists for enshrinement this year, recently spent the day with the Miami Herald’s Armando Salguero, and it led to a great article and a couple of video recordings (Hall of Fame talk and autograph session). I highly recommend checking all of them out.

We will pull a couple of things out of Salguero’s article, because they show how Taylor remembers one of the low-points in Dolphins history - and they pretty much align with what fans think - as well as some other moments in his career.

Speaking of the team’s 2007 head coach Cam Cameron, who led the Dolphins to a 1-15 season before being fired, Taylor said, “Cam was an idiot. I have no idea how he got the job. I’ve never been around a more incompetent head coach than Cam Cameron. I’m talking youth football, college. It was unbelievable...That dude lost me first day of training camp. Even at minicamp, I’m wondering what are we doing?”

(Check out Salguero’s article for more specifics from Taylor on the Cameron “era” for the Dolphins.)

Taylor also mentioned former Dolphins quarterback Pat White, who the team selected in the second round of the 2009 Draft. White was expected to give Miami a dual threat quarterback, one who had incredible speed whenever he kept the ball and could bring with him the explosiveness he demonstrated at West Virginia. Taylor told Salguero, “Pat White? The guy almost got freaking killed! Pat White? He was built like my son, my 12-year-old son. When he got hit against Pittsburgh, I thought he was dead.”

If you remember that play in January 2010, Taylor was not the only one who thought White was dead. Fans all over the place believed they had just watched White’s life end. As soon as Taylor made contact with White, White’s body went completely limp and he fell face first onto the sideline. Left tackle Jake Long was one of the first people to White, and immediately began waiving for the Dolphins’ training staff to get over to the quarterback, who was not moving on the ground.

Taylor also discussed playing the 2005 season with torn plantar fascia ligaments in both feet. The first one he actually tore Playing Offense, but he refused to let the team know that was when it happened. “I never told anyone until I retired that the first one I tore when I was playing wide receiver on offense down at the goal line,” Taylor explained to Salguero. “And I heard it pop. But I knew I couldn’t go back to the sideline and tell anyone I got hurt playing offense. So I had to wait when we went back out for defense and act like it happened on defense or else they’d never let me play on offense again.”

That is kind of funny now, but what an incredibly painful thing to have happen. Taylor adds he tore the other ligament later in the season and had to finish the year continuously getting shots in his feet. Taylor goes on in the article to explain some of the procedures needed to get those shots - and it is definitely interesting to see a little bit into the extremes the players will go in order to be on the field on Sundays.

Seriously, read the article from Salguero, which also includes Taylor’s comments on John Beck, Trent Green, nearly having his leg amputated, and his biggest regret from his playing days. You can find out so much more about the player who should become the next Dolphins Hall of Fame member - and hopefully it is this year that it happens.