I just talked to my evil brother (no the other one) Satan. He was pulling out of his driveway in Gulfport after the Hurricane heading to Camp. The coast has no water, no electricity and half the roads are blocked, but this did not deter him from heading North. He even managed to ignore the continuous beating on the drivers side window and curses hurled at him for 5 blocks before he could get rid of his devoted wife, Wanda. Isn't 2020 great. It is Squirrel Camp Week so get ready. 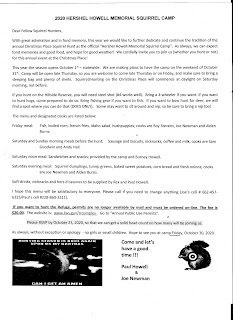 HOW TO TEACH YOUR CHILD TO SWIM