The Giant Life Choices of a Giant 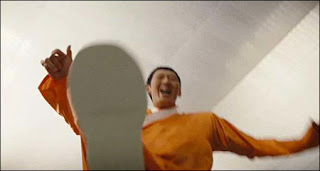 With the release of Rush Hour 3, the epic film career of The Serious Tip favorite Sun Ming Ming has begun. At 7 feet 9 inches, Sun Ming Ming follows in the footsteps of other large actors who began in the world of sports. Epic giants of the silver screen such as Andre the Giant (The Princess Bride), Gheorghe Muresan (My Giant), Dalip Singh "The Great Khali" Rana (The Longest Yard), Kareem Abdul-Jabbar (Airplane, The Game of Death, etc), and, of course, Shaquille O'Neal (Kazaam, Steel, and other Grammy-worthy pictures).

Rather than trying to "rank" these stars on who played the best role (definitely Andre followed by Kareem and Muresan, in my opinion), let me pose this question, if you were over 7 feet tall and unemployed, what would you do? Would you take a crash course in basketball, try your hand in pro wrestling, or attempt the life of a thespian?

Here are the advantages and disadvantages of each, according to me:

Basketball:
Probably the most physically demanding of the three, playing pro basketball would take the most dedication, practice, and training. And save for true freaks of nature like Yao Ming, most giants of the hardwood are deadwood on the court. But there are advantages, namely NBA groupies.

Wrestling:
While not as consistently demanding as pro basketball, being a wrestling giant would be grueling. Years of long travel, followed by constant banging and falling. No wonder most giants are immobile in the squared circle. However, the individual fame of even the briefest wrestling giant can dwarf that of a brief giant pro basketball player. Quick, who is more famous: Giant Gonzales or Pavel Podkolzin?

Acting:
Probably the least athletic of the three but yet the career path with the lowest barrier to entry. It would easy to be a giant enforcer in the next Vin Diesel movie and have little to no dialogue. Being a great giant actor, however, might be near impossible. Although there will always be places for giant centers or giant ring grapplers, it is doubtful the next great leading man will be over 6'6. Height discrimination, I know. So as a giant, roles are limited, although the work might not be, if you are willing to act in Ninja Kids 12.

My opinion:
Tough call. As much as I love shooting hoops and always wanted to dunk, I'll pass on being the next big baller. And as much fun as it would be to choke slam Vince McMahon, the life of a wrestler just seems too painful. So by process of elimination, I'd chose acting. Where else can I rub elbows with Jessica Alba, Megan Fox, and my personal favorite, Reese Witherspoon? Maybe the ladies like the 7 footers. You know what they say about a guy with big feet.

So what would you do? Play ball, wrestle, act? Perhaps a fourth option? Maybe join the circus? Maybe fortune and glory aren't your thing and you would rather live the quiet life of staying home and tending the chickens.

Whatever your choice, let it be heard in the comments.

Is Self-Help a Scam
How to Create a Winning Black Friday …
Africa to be the “Game Changer” of th…
Green Plastics? A Review of Medium De…
Nusa Islands vs Gili Islands 2020 {Wh…

The Giant Life Choices of a Giant