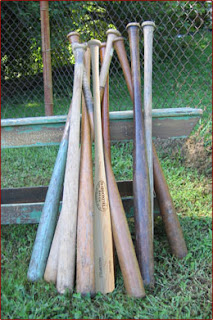 My dad grew up in the same Brooklyn neighborhood as baseball Hall of Famer Phil Rizzuto. According to legend, when Phil was away playing for the Yankees, Mrs. Rizzuto, the Hall of Famer’s mother, would invite the local kids over and pay them to help her with household chores. A nickel here, a piece of candy there; no favor was too large. To the neighborhood, the Rizzutos were like family and Phil was their pride and joy.

Of all the times my father did chores for Mrs. Rizzuto, one payment towered above all the rest. As the story goes, my father was out and about one summer afternoon when Mrs. Rizzuto called him over. According to my dad, the Rizzuto basement had been neglected of late and Mrs. Rizzuto needed someone to clean it out. Of course, my father eagerly volunteered.

After he complete the epic task of straightening the Rizzuto basement, Mrs. Rizzuto came down to negotiate payment. She was out of change and candy she said, but if he wanted he could take his pick of items from an old dusty footlocker her son Phil had left behind. Not one to go home empty handed, my father quickly strode over to the footlocker to find his compensation.

The footlocker was old, alright. The type used in the 1920s and 30s before suitcases became the rage. There was also a name engraved on the top: G.H. Ruth. Sensing nostalgia, my father eagerly popped open the locks and lifted the top. Inside, among the trinkets and miscellanea, was a baseball bat. A huge bat, far bigger than he could use in any streetball games. But Mrs. Rizzuto had said he could have anything, and he wanted G.H. Ruth’s bat.

Although the adult-sized bat was too large for my father, he kept it through the years. Rarely used for over two decades, it sat in a spare garbage pail in the garage with other lighter bats, shovels, soccer balls, and random sporting equipment. As we moved from New York to Florida, the bat stayed a seldom-used icon. Then, in the mid-1990s, I, your humble narrator, took my chances with G.H. Ruth’s bat.

One of my favorite hobbies after school in my teens was self-hitting tennis balls up and down my block. Whenever possible, I would use a tee to practice my swing. One afternoon, lacking a functional tee, I decided to balance one of the balls on a local fire hydrant and hit the ball as far as I could. Whereas I knew if I missed with one of my aluminum bats, I could seriously dent it on the hard metal fire hydrant, I decided to use the heavy lumber of G.H. Ruth.

With the ball carefully balanced, I stood ready, sizing the target up with a few half-swings. Then, with an attempt that could only be equaled by a Greek god, I swung as hard as possible. With a bang, the bat smacked against the fire hydrant, missing its intended target by inches. Although the concussion made the ball roll ten or so feet down the road, the vibrations from the immovable hydrant shocked my hands with a stinging pain. Yet the pain in my hands was quickly secondary to a sense of impending doom. I had broken the ancient bat, cracking it right down the middle. I destroyed a cherished family heirloom. A priceless piece of history owned by Mrs. Rizzuto, and before that, G.H. Ruth.

Oddly enough, my father was far less upset than I thought he would be. There were no repercussions. I was not grounded, punished, or sent to bed without dinner. I still had my privileges, and could go out with my friends whenever. Life just went on.

Later that year, while helping him work on his car, I asked my dad who invented the bungee cord. Without hesitation, he answered, “Arthur J. Bungee, during World War II, in order to preserve rubber for the war effort.”

I had to believe him. My dad doesn’t lie.

The End or the Revival of Ethereum
Here Are 3 Reasons Why You Should Alw…
Four Things Jesus Says About a Discip…
Best Story-Rich Games on PC: November…
My closet is finally organized, but d…