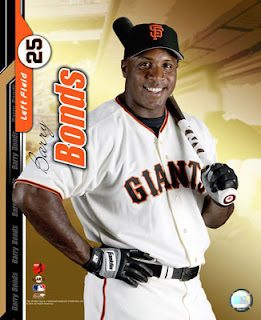 As the 2007 baseball season marches into its second half, one of the biggest stories will of course be Barry Bonds's pursuit of 756 home runs. Now more a question of "when" rather than "if", Bonds will soon pass Hank Aaron as major League baseball's Career home run leader.

Not to take anything away from Mr. Bonds, but passing Hank Aaron does not make anyone the best home run hitter of all-time. Not even close. As a matter of fact, Bonds will only move into 8th place when he hits number 756.

A look at those who rounded the bases more frequently:

7) Josh Gibson - Josh Gibson is considered by many to be the most prolific home run hitter in Negro League history. Rumor has it he hit between 800 and 1000 home runs. Unfortunately, because many Negro League games went undocumented and Gibson played in many unofficial scrimmages and barnstorming games, his true home run total may never be known.

However, taking what is considered his accurate home run per at bat ratio of 15.9, assuming in his travels he had 700 at bats a year (44 home runs), and figuring he played 18 seasons as a professional (16 in the Negro Leagues), Gibson would have ended with 792 homers. Short of 800, but more than Hank Aaron's 755.

6) Sadaharu Oh - Sadaharu Oh is the Japanese professional league career home run leader with 868. Although many have claimed the level in a league where former major league journeymen like Tuffy Rhodes can hit 55 home runs is not of equal measure, Oh's endurance through 21 years speaks volumes to his greatness. 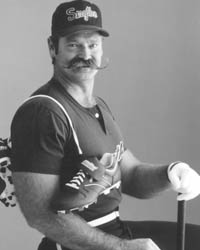 4) Bruce Meade - (pictured) Another prolific softball slugger, Bruce Meade not only hit a home run into the upper deck of the Houston Astrodome, he also holds the record for longest distance for a softball home run (510 feet). For his career, Meade hit more than 3,500 homers, including a career best 247 in 1981.

3) Don Clatterbough - Slugger extraordinaire, Clatterbough was inducted into the Amateur Softball Association Hall of Fame in 2001. Modestly described as "a tough out", Clatterbough was a five-time ASA first team All-American and supposedly hit between 3,500 and 4,000 home runs.

2) Rick Scherr - Throughout the 1980s, no one hit home runs more frequently than Rick "The Crusher" Scherr. During what would be the best stint of his career, Scherr averaged a home run every 2.3 at bats and hit over .700. When his career ended after the 1991 season, Scherr counted over 4,000 home runs to his credit.

1) Don Arndt - For over three decades Don Arndt terrorized softball pitchers with his "fluid, graceful, almost effortless swing". Playing his entire career with Howard’s Furniture-Western Steer of Denver, NC, Arndt hit a career-high 309 home runs in 1985 at the age of 50. He ended his career with almost 7,000 home runs.

At the rate he is going (1 HR per 12.9 ABs and 441 ABs per year), Barry Bonds would have to average his 34 home runs for another 100 years to be in the same echelon as Meade, Clatterbough, Scherr, and Arndt. Think the mainstream media can stretch the steroids story that long?

Download Advance Arithmetic Tricky Ma…
What Marathon Running and Successful …
Promote the Common Good
Afraid or not, life still marches for…
There are 16 Personality Types. What’…