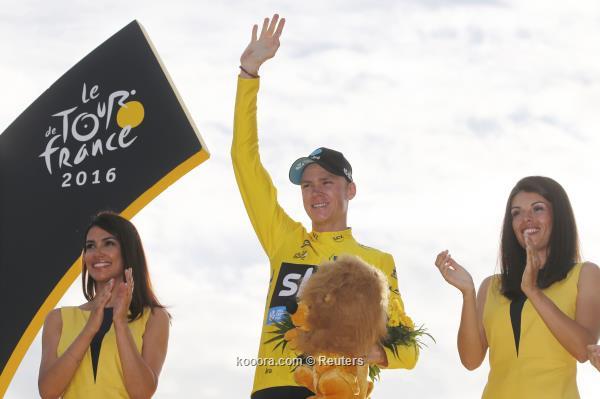 Yellow jersey leader and overall winner Team Sky rider Chris Froome of Britain celebrates on the podium
Chris Froome rode a wave of hostility to his first two Tour de France wins, but he had an easier time out of the saddle on his way to a third, winning respect if not love from the tough French crowds.

The Briton's first two titles were accompanied by tense moments with spectators and questions about cycling's doping past were never far away.

This year, Froome looked much more relaxed as the crowds seemingly warmed to the Kenyan-born rider.

He built his 2013 and 2015 victories on stunning attacks in the climbs, but he triumphed this year by surprising his rivals on descents and the flat.

A sometimes robotic character, Froome looked human when, after his bike was broken in a crash involving a motorbike on the slopes of Mont Ventoux, he started to run up the road in one of the most memorable moments of any Tour.

"A last word in French," Froome told the crowd at the end of his victory speech on the Champs Elysees.

"Thank you again for your kindness in this difficult period for you. You have the greatest race in the world and it's a great honour to wear the yellow jersey.

His ride earned Froome sympathy from the crowd as did his crash on the penultimate stage which left him with a bloodied knee.

That was not enough to unsettle the Briton, who with his third title in four years has become a more popular figure in the race after being grilled by the media on doping issues and having urine thrown at him by a spectator last year.

"I think for quite a lot of reasons, I've put that to rest now," Froome said.

"I've done a lot in terms of offering up my physiological data and trying to be open to people as much as I can while protecting a competitive advantage at the same time," he added.

Froome said things had been put into perspective by the recent attack in Nice in which 84 people were killed and many more injured when a man he drove his truck through a Bastille Day crowd on the seafront at the Riviera city.

"It's a strong sign that life goes on," Froome said, giving credit to organisers for ensuring the race went ahead.
TEAM MATES

The 31-year-old is grateful to the public and he knows he also owes his success to his team mates, including Wouter Poels, who kept him safe and formed the most formidable team assembled in years.

"I feel so privileged to be in this position where I've always had team mates around me in the race," Froome said.

"Although we haven't won the team competition, we've had by far the strongest team in this race and I'm incredibly grateful for that."

Froome has vowed to try for more victories on the Tour, having joined Belgian Philippe Thys, American Greg LeMond and France's Louison Bobet as triple winners.

Ahead of him are five-times champions Miguel Indurain of Spain, Belgian great Eddy Merckx and Frenchmen Bernard Hinault and Jacques Anquetil.

"It would be my dream to keep coming back to the Tour for the next five to six years if I can and give it my best shot. I hope I can do that next year," Froome said.
http://livesporthdtvlive.blogspot.com/